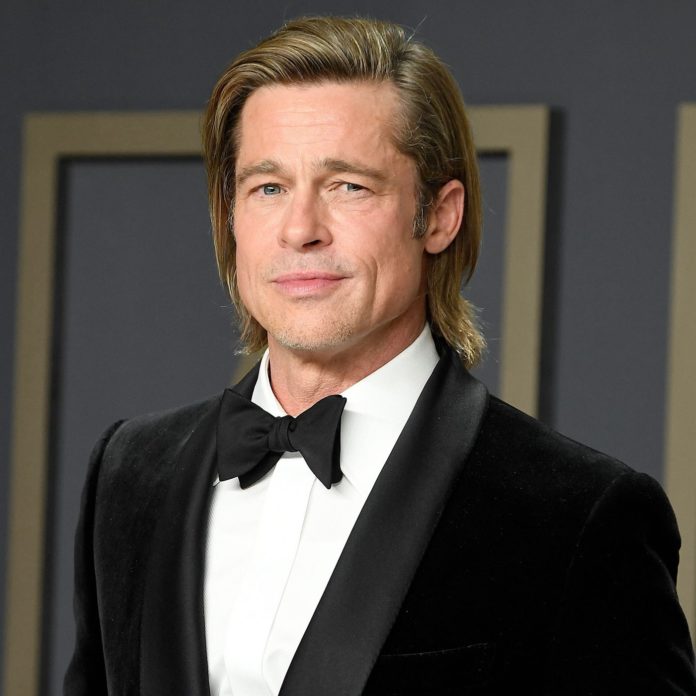 Sometimes, I think of other men’s hair. I wouldn’t say it’s in a sexual way. Not in a jealous way either. I have gorgeous hair—hair that emerges and falls from my scalp like the plume of smoke coming off a Roman candle on the Fourth of July. That fact alone allows me to see the men around me and appreciate their follicle game. To see them for the beauties they are. There may be no better, more consistent role model than Brad Pitt, though. What I’ve come to respect about Brad Pitt over the years is that while the man is, indeed, an incredible actor, he also has a firm understanding that a chiseled face and a mane worthy of a lion god have cemented him as a Hollywood icon. You like him in Troy, but you loved the way his hair blew in the wind. Don’t let fragile masculinity get in the way of hardened fact.

In this complex time where you may not have had a decent haircut in, say, three months, let’s take time to honor and celebrate and uplift a man who has always had an established grip on haircare. (Well, at least until the Fight Club years; we all have our demons.) Let us exalt him, and the 30-plus years he has given us of excellent hair. Let us embark on this journey, together.

Look at him! Fresh faced. Mother approved. That one dangly wisp in the front represents every guy who has ever been cooler than you, yet manages to still be likable. This is the laissez-faire hairstyle of teen boys everywhere.

Everything from above, but make him complex. This is one of the earliest signs that Brad Pitt and Brad Pitt’s hair would have two separate, yet congruous careers.

Here, the boy is evolving into a man. The blonde hair has been chopped into something resembling a more uniform cut, but the face and demeanor maintain their youth. Fun fact: This is also the year that Brad Pitt hooked up with Geena Davis in a hotel before stealing her money!

There is a point in every young man’s life (perhaps you’re going through it right now), when he just lets all the hair grow. This is what seems to be going on here, and it’s a weird dichotomy between an older, masculine bottom half of the face and a bizarrely boyish long cut up top.

It really is a shame that The OC wasn’t filmed in the early ’90s.

With nary a bottle of conditioner in sight, this Interview with a Vampire situation is a real misstep. And, just being frank, you never want to hear the words “but your roots,” but… his roots. Nevertheless, this hairstyle smacks of a very particular era, and for that, it gets a pass.

For some reason, this hairstyle just encapsulates an entire era. Pitt was doing it early, but this short, messy, spiked updo stays popular well through the early 2000s.

The tendrils. The goatee. The nondescript length of hair in the front and back. This man has annually offered me an L&M cigarette while leaning against my parents outdoor freezer since I was nine years old. He talks at length about the Plymouth Duster I. He makes sure you don’t want that cigarette before going back in for Thanksgiving dinner.

To defend Brad in this photo, it should be noted that he’s dating Gwyneth Paltrow at this point in life, which should explain everything. But the blonde exo-strands that seem to be shooting off his head are a bit bizarre. For those who remember the turn of the millennium, there was a lot of anxiety about whether computers would fail. We had bigger fish to fry than a questionable haircut.

One of my favorite things about Brad Pitt is his ability to somehow look younger years after a previous era. In this photo, this hairstyle is the manifestation of what he looked like while driving the Plymouth Duster I discussed in 1996.

Ah, yes, the Snatch era. A bit oilier than I’d like, Pitt is somewhere between Ellen Degeneres coming out on national television and Kurt Cobain. The length suits him surprisingly well… it’s just that strange wet look that never seems to land correctly.

This is a classic Pitt look. The short hair! The illusion of a Widow’s Peak! This man somehow looks aspirational and rich, while also appearing approachable. Arguably, this is also the beginning of Pitt’s proper movie-star era.

There is a 45 percent chance this is Haley Joel Osment.

I can’t shake the feeling that this haircut is somehow inspired by Hillary Duff. Nonetheless, this long hairstyle is working. Ultimately, Pitt almost always looks better with a shaved face, which allows the flowing blonde locks to do the heavy lifting. This is what good, washed hair looks like.

Few men can pull off a buzzcut without looking like a white nationalist. Sorry, that’s just the rules. However, Pitt makes it work. There are few shocks like fully cutting your hair down within an inch of your head, though, so to avoid that “Not Mein Problem” aesthetic, don’t go too short and beware majorly if you’re a light blonde.

There is this thing that the upcoming generation of young men do with their hair where it seems to leave the front of their scalp and just float in space. It’s hard to explain, but when searching for past Pitt s, this one jumped out because, naturally, Pitt managed to create this vibe way before some of these kids were out of diapers. The way some of the follicles just jut out into the ether without so much as a care? Beautiful.

Hardly his most popular look, I’d like to make the argument that his is what Pitt does best. Movie stars are a dying breed, and Brad Pitt is probably one of the last of the greats. Here, all he’s done is slicked his hair back with a part, but it looks coiffed. It looks smart. It looks timeless. Not pictured: Angelina Jolie looking equally glamorous in Old Hollywood-style dress and hair.

It’s the goatee. I swear to God it devalues his hair every time. This is another variation of the Gen Z, but the hair just happened to not have the energy today.

At the time he played Aldo Raine in Inglourious Basterds, Pitt reimagined that Old Hollywood look, threw a scarf on it, and grew out the bravest little mustache. It works. While some prefer the youth of Pitt, a couple of forehead wrinkles and a sensible haircut that has the potential to show off both volume and class is where he thrives. Note: the dangling tendril that made him cool in 1988 remains, albeit more subtle. You beautiful bastard.

No, I’m not talking just about the glasses. Something about this cut screams Tom Cruise vibes. Even with the wild missteps of the past, this is the first cut that makes Pitt seem a little…old. Even for the timeframe. Fortunately, this is not a look that holds.

This is a man who needs a sensible, Artistic haircut to signal that he has elevated himself past movie star. He’s an Artist. Does that capital A look like a typo? Of course you think it is. You’re not an Artist. The hair here should be just a certain length, where it caresses the shoulder without ever resting on it. It is managed, but appears it isn’t. The hair should only suggest interaction. Look at her like you’re never going to see her again. Hold her like no one has ever hurt you so deeply. Ok, we’re going to reset and shoot again.

This is what happens when you commit to a long-haired situation, and it pays off. Some men can do lengthy hair. Others simply can’t. Here, the dark blonde of Pitt’s hair manages to perfectly straddle the line between professional and casual. It also helps that he’s Brad Pitt.

A variation of this hairstyle has defined the men’s hair zeitgeist for years now. Long on the top, short on the sides, it’s extremely manageable (and made popular by almost every professional soccer player known to man), but for some reason, it just doesn’t seem to fly when it comes to Brad.

A real dad classic here. The grown out buzz is essentially when your hair just grows out from a buzz cut. Of course, to be successful, it must be managed. Trims on the side aren’t recommended; they’re mandatory. But in flux, a “fuck it, let it grow” look is absolutely acceptable.

Off the scene for a few years, Pitt returned with his best look to date. A bit of a salt and pepper goatee—it works here!—mixed with a beautifully coiffed long-hair situation that is slicked back. In this James Garner kind of style (this is, for the record, the utmost of compliments), he’s moved into an older look with such grace and sex appeal. Long hair will always have the subtle allure of sexiness, and Pitt manages it perfectly here.

The COVID Vaccine Made History. Let’s Channel That Energy Into Curing Cancers Like Mine