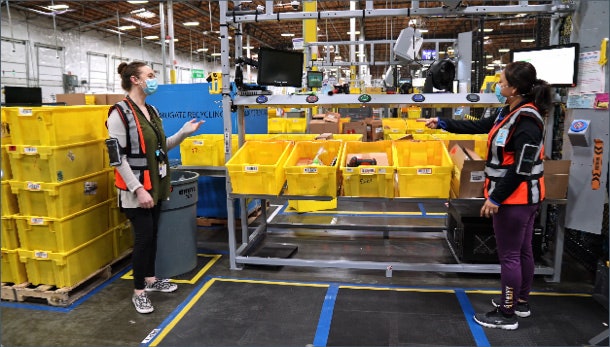 Some Amazon workers say the company’s intentions and mechanisms are both failing to keep them safe. Those workers have talked with WIRED and other media, circulated a petition, and staged sick outs to pressure the company to offer better health benefits and safety protections. In April, two Amazon workers said they were fired for circulating the petition asking for extra health coverage and hazard pay. Amazon vice president Tim Bray quit the company in protest, writing that the incident and other alleged retaliation was “evidence of a vein of toxicity running through the company culture.”

Several warehouse workers told WIRED this week that social distancing rules are patchily observed and enforced. One said they’ve seen coworkers caught repeatedly violating the same policies, without consequences. “I’ve told managers on each shift where this has occurred and nothing is done,” they explained.

Another said members of the safety team that checks compliance with mask and distancing rules in their facility in the Midwest violated the policies themselves. “As you can imagine, people are treating the whole thing like a big joke,” they said.

A third worker, in Florida, painted a different picture—a reminder that conditions vary across an operation as vast as Amazon’s. “They have done a great job distancing people,” the worker said. “I think they are doing a great job, it just took a little bit to get there.”

A spokeswoman for Amazon disputed claims of lax social distancing, citing company data, and said workers who intentionally violate the rules twice can be terminated. Similarly, Porter pushed back on Bray’s claims in a LinkedIn post last month and says Amazon investigates any time an employee raises concerns about Covid-19 safety. “I feel super good about what we’ve done,” he says.

Amazon is working on other technology to aid social distancing. One is a system called distance assistant that uses augmented reality to give people feedback on their social distancing, much like a roadside speed display. A large monitor connected to a computer and 3-D camera shows live video of the scene with 6-foot diameter circles overlaid on the ground around the feet of people in view. If the circles around two people touch, the virtual boundaries turn red, otherwise the circles are green. The system works without sending data to the cloud, and Amazon says it will open source the software behind it soon.