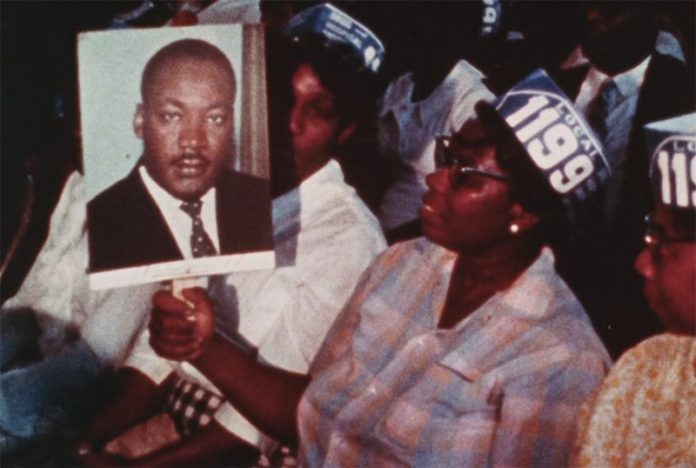 MUBI, the premiere streaming service for curated films, has revealed its July lineup which continues to showcase exciting new exclusives, rediscovered gems, and carefully curated retrospectives. As part of MUBI’s commitment to showcase more work from Black filmmakers, this month’s slate will present a double bill from the pioneering Black artist Bill Gunn, starting with his 1973 cult classic film Ganja & Hess and followed by Personal Problems, a collaboration between Gunn and acclaimed writer Ishmael Reed. MUBI will also present three films by Madeline Anderson, who is often credited as the first Black woman to produce and direct a documentary and is best known for her films Integration Report 1 and I Am Somebody, the latter of which garnered both national and international acclaim.

The full list of titles set to premiere on MUBI in July includes:

After premiering at last year’s Berlinale, MUBI is excited to present the exclusive online premiere of Dominik Graf’s director’s cut of his epic crime drama The Invincibles. A commercial flop when it was first released 26 years ago, it is now regarded as the most ambitious effort by the prolific filmmaker. Under celebrated outside his native Germany, Graf is a master genre filmmaker worthy of discovery.

MUBI is excited to return to the work of Christian Petzold, presenting his celebrated feature Transit (Berlin ‘18). Based on Anna Seghers’s 1942 wartime novel, Petzold’s haunting modern-day adaptation subverts time periods and genre conventions, resulting in a disorienting, timeless look at the plight of displaced people.

MUBI is proud to present the exclusive online premiere of Family Romance, LLC (Cannes ‘19), the latest work by the legendary Werner Herzog. A beguiling, fictionalized look at a real-life Japanese company that offers stand-in family, friends, and admirers for hire—this self-financed meta-narrative feature is the well-travelled director’s first effort in East Asia and features a cast of non-professional actors. Shot by Herzog himself, the film blends fiction storytelling with documentary-style visuals for a striking meditation on truth and artifice in the age of loneliness.

Bill Gunn—filmmaker, playwright, actor, and novelist—has become synonymous with the whitewashing of Hollywood that denied, and continues to deny, filmmakers of color the chance to have their work properly funded and distributed. But more importantly, Gunn stands as a singular artist of undeniable ingenuity. Two of his three directorial efforts are presented in this double bill, including his expressive vampire thriller Ganja & Hess, famously remade by Spike Lee in 2014 as Da Sweet Blood of Jesus.

Madeline Anderson is a trailblazing filmmaker and artist, recognized as being the first African American woman to direct a documentary. MUBI will present three of her films made from 1960-1970, all of which are indispensable historical records of the civil rights movement and fundamental examples of political filmmaking.

Fresh from this year’s Rotterdam Film Festival, Katharina Kastner explores the multiple lives of the wonderful Villa Empain in this 16mm documentary. First a private residence, then a Soviet embassy, and now an art gallery, Villa Empain captures history through the marks left on the singular building.

After highlighting his celebrated film Extraordinary Stories in 2017, MUBI is proud to present the exclusive online premiere of Mariano Llinás’s highly anticipated 14-hour epic. A work ten years in the making, La Flor (Locarno ‘18) will be presented in three parts with six playfully distinct episodes, each preceded by an introduction by Llinás himself and starring the same four actresses. Although touted as the longest film in the history of the Locarno Film Festival, the film’s blending of genres and subplots is far from daunting, but rather wildly entertaining.

Romina Paula, the multi-talented Argentine actress, novelist, and playwright, turns to directing in Again Once Again (Rotterdam ‘19) — a beautifully delicate, autobiographical look at motherhood in which Paula stars as herself, blending documentary and fiction.

As part of the platform’s ongoing commitment to spotlight filmmakers who deserve more visibility, MUBI will highlight the singular work of Rita Azevedo Gomes, one of Portugal’s best contemporary filmmakers whose prolific career spans across cinema, theatre, and fine art. These diverse influences shine through in her most recent narrative work The Portuguese Woman (Berlin ‘19), a rich portrait of a newlywed woman left alone in a 17th-century castle.