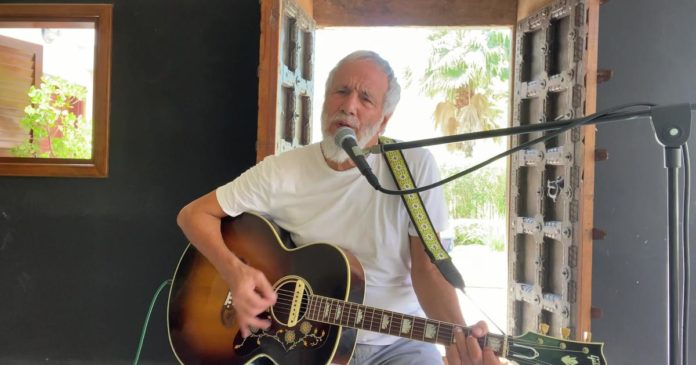 By any name, Yusuf Islam is a legend. Fifty years ago, the man who came to fame as Cat Stevens released his masterpiece album, “Tea For the Tillerman.”

And now, he has a new album coming out in the fall, but you might already know every word to every song.

In “Tea For the Tillerman 2,” Yusuf has re-recorded every track, but with the perspective that 50 years of living can bring.  The songs seem as fresh as ever, and – at almost 72 – so does he.

He talked to correspondent Tracy Smith from his home in Dubai.

“First of all, you still look great,” Smith said. “But your voice sounds the same. How’d you do that?”

“You know, I live a very healthy life.  Don’t drink. Don’t smoke. Don’t take drugs. All that stuff. But you know, when I went away, it’s like land, it’s like Earth, you know? If you leave it, it starts to develop all these nutrients. Leave it fallow, come back the next year, two years’ time, wow, things start blooming. And it’s kinda like that.

“I’d become an amateur again, if you’d like. I didn’t mind. But my voice was still fresh, which, you know, is a miracle, really.”

For example, in the achingly poignant conversation between “Father and Son,” the tracks were recorded 50 years apart, and both versions are perfect in their own way.

Smith asked, “You’re doing a duet with your younger self. What’s that’s like for Yusuf and Cat Stevens to be together?”

“He’s great! I love working with him, honestly!” Yusuf said.

To watch a remastered music video of Cat Stevens performing the original “Father and Son” click on the video player below:

It was Yusuf’s own son, Yorios, who came up with the idea to re-record the album, including “Where Do the Children Play?” a song that may resonate more than ever today. In fact, most of the props in the new music video are made from recycled garbage.

To watch a new music video of Yusuf’s rerecording of “Where Do the Children Play?” click on the video player below:

Smith asked, “When you wrote this song, it was inspired by your own childhood and where you played?”

“Yes, in a way,” he said. “I was born in the middle of London, in the West End. And it was all concrete. And so, you know, you learn how to, well, I learned how to climb roofs for sure. Again, it wasn’t trees. I was climbing roofs. Well, that’s the cat in me!”

Now, through his Peacetrain foundation, he’s helping to feed hungry children, and give them safe places to play. “I got involved in education, and one of the things I’ve made sure was that there was a massive, you know, place that’s for the kids to enjoy,” he said.

His charity work has long been an important part of who he is. Yusuf converted to Islam in 1977 and walked away from music for a time. But he says he’s still the same man who wrote those amazing songs all those years ago.

“Yes,” Yusuf said. “Well, I would say in certain regions, yes. That’s why I’m trying to reclaim the narrative. And that’s why, in a way, I’ve got back to recording ‘Tea For the Tillerman’ again because, you know, it’s me! It’s not like that guy back in 1970 has disappeared and now is some ghost. You know, it’s not that. I’m him!

“The same spirit that helped me write those songs. It’s just I’m a little bit more up on the levels, you know? Departments, you might say, I’ve gone up a few floors. That’s all. And a longer, slightly longer beard!”

Like most of us these days, Yusuf is sticking close to home, but he hopes to get back on tour next year. After all, he’s a man who loves a good Cat Stevens song almost as much as the rest of us.

Smith said, “Everyone has a story about Yusuf/Cat Stevens song that affected their life, that they remember from a certain moment in their life. How does that affect you hearing all of those things?”

“I’m incredibly honored,” Yusuf replied. “When you’re doing something when it’s really honest, it does have a lasting effect. And I think music generally, it enables us to unite on a thought. You’ve got a thousand people in an arena, you know, listening and uniting around a song. And that’s beautiful. That’s great. And so it’s a gift. It’s such a gift.”