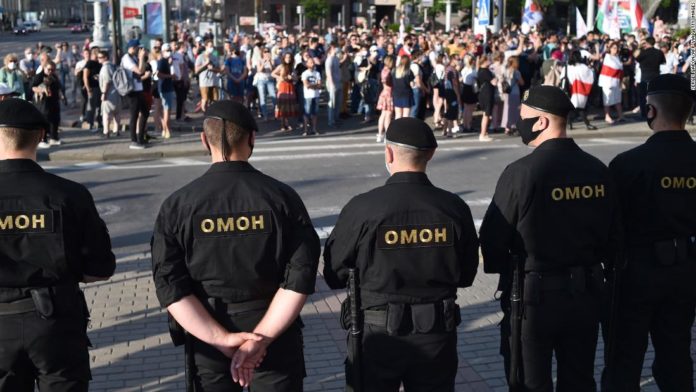 Lukashenko has ruled the former Soviet republic of more than 9 million people since 1994 and is running for the sixth time in an election scheduled for August 9. He has long drawn international criticism for suppressing dissent, and the country’s secret police — still known as the KGB — often detain and harass opposition activists and independent journalists.
Demonstrations on Friday, in which thousands marched on the streets of 10 cities, were prompted by a series of arrests, in what the opposition activists called an attempt to take popular candidates out of the presidential race. Two of Lukashenko’s main opponents are currently in KGB and police detention: popular YouTube blogger Sergei Tikhanovskiy, who was detained in late May, and former Belgazprombank chairman Viktor Babaryko, who was arrested on June 18 along with his son and campaign manager, Eduard Babaryko, according to their campaigns.
Following the news of the latest arrest, activists started forming “human chains of solidarity,” some of which stretched from to several kilometers, according to the organizers and local media reports.
The independent non-governmental organization Viasna, which monitors protest activity in Belarus, reported Saturday that at least 120 people were detained overnight, including many journalists.
On Friday, Lukashenko said the protests are a foreign plot and claimed that the country’s law enforcement “thwarted a Maidan,” alluding to the 2014 revolution in Ukraine that ousted the country’s pro-Russian president.
“We managed to take some steps ahead of schedule and quash the large-scale plan to destabilize Belarus,” Lukashenko said according to state-run news agency BelTA. “We showed the true faces of the puppets we had here and puppeteers who sit outside Belarus.
“Don’t make me choose. If I behave myself in a democratic way, if I show them that I’m so warm and fuzzy, I have a chance to lose the country altogether,” Lukashenko added.
Babaryko is considered to be Lukashenko’s main opponent in this presidential election. His campaign says they have collected 425,000 signatures in support of his candidacy, passing the bar of 100,000 signatures.
The country does not have reliable independent political polling, but in early June, a meme “Sasha three percent” was trending on Belarusian social media, referring to low numbers for Lukashenko in unofficial polls from independent online outlets. Sasha is a nickname for Alexander.
Eduard Babaryko’s girlfriend said in a Facebook post Thursday he is being questioned in the KGB detention center on tax evasion charges. Lawyers for Viktor Babaryko said they have not been able to visit their client. As of Saturday, the Babarykos have not been released.
The arrest was preceded by a series of police raids in Babaryko’s offices and apartments of his family members. Head of the Belarusian Committee of State Control Ivan Tertel said that 20 current and former bank executives linked to Babaryko have been arrested on various charges, including tax evasion and embezzlement, and confessed that “Babaryko is the organizer of a criminal scheme.”
Babaryko denies any wrongdoing and says the charges were politically motivated.
Lukashenko has claimed that several candidates running against him in this election have ties to Russia. Several Belarusian outlets called Babaryko “a Kremlin-linked candidate” as he ran Belgazprombank, a subsidiary of Russian state-owned energy corporation Gazprom, for the past 20 years. Babaryko himself denied the allegation and asked the media not to call him a pro-Russian candidate. Lukashenko has long cultivated close relations with Russia, which has close economic ties and a customs union with Belarus.
“[Lukashenko] is doing it because of the roadmap on deep integration with Russia… in which Belarus loses its sovereignty, and it prompted a wave of public outrage,” Babaryko said in an interview with Russia’s independent news outlet RBC. “So now any hint that something is done to benefit Russia or any other state causes [negative] reaction within Belarusian society.”
The Kremlin has also denied it supports Babaryko and dismissed accusations against Gazprom.
“The Kremlin does not have candidates in Belarusian elections,” Dmitry Peskov, spokesperson for Russian President Vladimir Putin, said earlier this week.
Putin and Lukashenko exchanged a phone call this week but did not discuss the situation around the Belgazprombank, according to Peskov. Lukashenko is expected to visit Moscow next week to attend a rescheduled Victory Day parade on Red Square.
UK and US governments condemned the arrests and urged the Belarusian authorities to respect the right of its citizens for peaceful protest.
“The United States urges the Belarusian government to uphold its international commitments to respect fundamental freedoms by allowing the Belarusian people to freely, peacefully assemble and releasing those detained, including journalists covering tonight’s peaceful gathering,” the US Embassy in Minsk Twitter account said in a tweet.