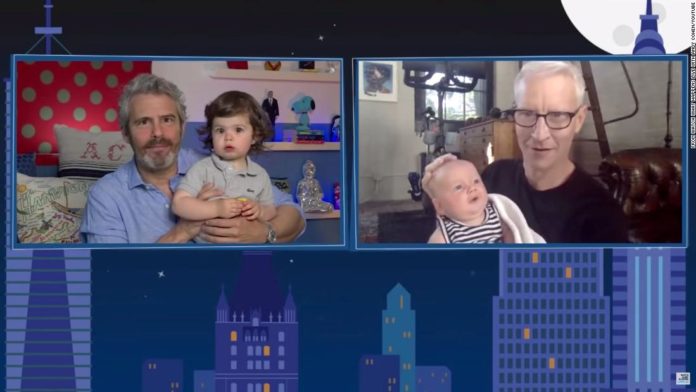 Andy Cohen had his bff Anderson Cooper on his late night show “Watch What Happens Live with Andy Cohen” Sunday and they had a virtual meet up for their sons.
Cooper recently became a dad to Wyatt Morgan Cooper who was born in April and Cohen is father to toddler Benjamin who was born in February 2019.
The adults are besties as well as co-hosts of CNN’s New Year’s Eve show and Cohen said of their kids on his show Sunday night “I thought it would be fun if they met right now.”
“Look, that’s going to be your good buddy Wyatt,” Cohen told his son as he pointed to Cooper and Wyatt on the screen. “Have you boys ever been to Brazil?”
The fathers and sons meet up had to be a virtual one as Cohen, who has recovered from Covid-19, is quarantining and working from home like many others around the world.
Cohen told Anderson that his newborn looks like a miniature version of him (so that would be a mini Cooper).
Cooper showed off baby Wyatt’s outfit, a gift he said looked like a 1920s bathing suit.
The fathers are frequent vacation partners and Cohen let his son know that will continue.
“We’re going to travel together,” the Bravo host and executive told Benjamin. “And if you like him half as much as I like his daddy, you’re going to be great friends.”
Both men became dads via surrogates.