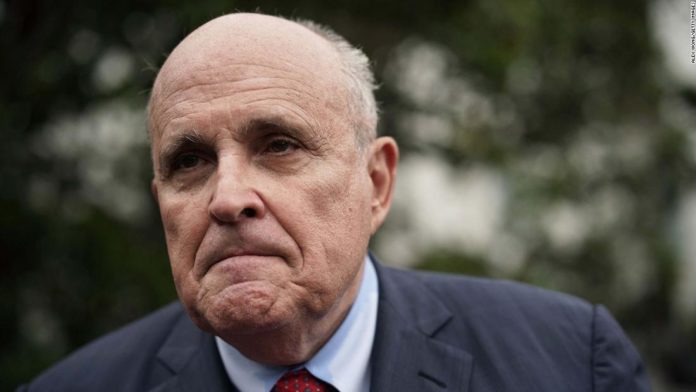 The mastermind behind Donald Trump’s Ukraine imbroglio is now sticking his oar in this autumn’s presidential debates. The former New York mayor-turned-presidential fixer has been nominated by Trump to push for more than the three traditional debates between the two major party candidates ahead of the election.
At one point it seemed as though the US President might skip the debates altogether. But now, trailing behind Democrat Joe Biden in the polls, he’s got an incentive to engage his rival as often as possible.
Presidential debates have for years been sponsored by a non-profit commission under the oversight of both parties. They tend to be rather staid affairs — partly because of all the conditions typically imposed by each campaign. It’s pretty obvious Trump thinks Biden has lost a step, an impression he thinks he can bring across to Americans with his scorched earth debate strategy. But Biden is not a bad debater himself — though he never hit top form during Democratic campaign debates, he performed strongly in vice presidential debates while on Barack Obama’s ticket.
Trump’s gambit poses an interesting challenge for Biden. If he refuses a rolling series of debates, Trump will claim Biden can’t handle the heat and wants to stay in his basement until November. But why should Biden’s camp deal with Giuliani — his old former rival, who goaded Ukraine to probe false accusations of corruption against him? And tactically, why give Trump any more opportunities to get on level terms?
If Trump wanted to play fair, he wouldn’t have picked Giuliani. Enlisting the garrulous pro-Trump streetfighter suggests that the goal is less to embrace a traditional public exercise in democracy, and more like just another backroom scheme to make Biden look bad.

‘Do you get the impression that the Supreme Court doesn’t like me?’

The Supreme Court on Thursday blocked the Trump administration’s attempt to end Deferred Action for Childhood Arrivals, which protects from deportation hundreds of thousands of people who were brought illegally to the US as children. The crucial vote in the five-four ruling was cast by conservative Chief Justice John Roberts, who penned the opinion. “We do not decide whether DACA or its rescission are sound policies,” Roberts wrote. “‘The wisdom’ of those decisions ‘is none of our concern.’ We address only whether the agency complied with the procedural requirement that it provide a reasoned explanation for its action.”
But Trump, who was recently disappointed by another SCOTUS ruling against hiring discrimination of LGBTQ people, seemed to take it personally. “Do you get the impression that the Supreme Court doesn’t like me?” he tweeted Thursday.

The deadliest clash between Indian and Chinese troops since 1975 took place this week in a remote valley in the Himalayas. Until last week, both countries had seemed to be trying to de-escalate tensions along the area’s disputed border. But Monday’s gruesome combat between border soldiers proves how quickly unresolved issues between the neighboring giants can turn lethal.
It all started with a tent, a source in the Indian Armed Forces tells me. Chinese troops had erected the shelter on disputed land, and Indian soldiers and a commanding officer dismantled it, the source said, adding that the Chinese troops left — but returned later that day with reinforcements, armed with stones and bamboo poles riddled with nails. Firearms are not carried by Chinese or Indian troops along the Sino-India border.
They fought for at least four hours, says the source, in a bloody brawl that killed 20 Indian soldiers. A statement by the Indian Army mentions casualties on both sides, though China has not admitted to any deaths on its side. (CNN has not independently confirmed the details of the clash.)
For 36 hours afterward, India’s populist prime minister Narendra Modi made no public protest. “Why is the PM silent. Why is he hiding? Enough is enough. We need to know what has happened,” tweeted Rahul Gandhi, a senior member of India’s main opposition party. But on Wednesday afternoon, Modi drew a line in the sand: “India wants peace,” he said, “but it is capable of giving a befitting reply when provoked.” The sacrifice of Indian soldiers would not go in vain, he added.
Here’s Modi’s dilemma: Taking bold diplomatic or economic action against China could derail border talks — but little or no action could embolden China’s incursion attempts, and further upset Modi’s domestic support.
Here in New Delhi, 60 people including army veterans protested outside the Chinese Embassy. Defaced posters and effigies of the Chinese President were burnt in some parts of the country. Since Wednesday, #BoycottChina and #GoChina have been trending on twitter in India. There is a growing demand to shun Chinese apps and goods. And there are strong murmurs of terminating Chinese contracts in the telecom and railways sector. Blinded by nationalist sentiments, the basic fact that China is one of India’s biggest trade partners is being overlooked by seething Indians.
Countering China’s relentless attempts for regional hegemony is now one of the biggest challenges Modi faces in his second term, especially after informal summits with Xi Jinping in Wuhan and South India failed to bridge the trust deficit on the border shared by the two nuclear powers. — CNN’s Vedika Sud writes to Meanwhile from New Delhi