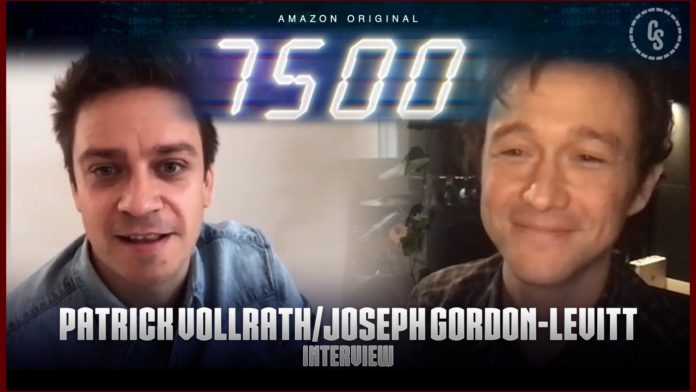 ComingSoon.net got the opportunity to chat with star Joseph Gordon-Levitt (Snowden, The Dark Knight Rises) and debuting writer/director Patrick Vollrath to discuss the action thriller 7500, in which the Golden Globe nominee stars as a co-pilot of a plane in the midst of an attempted hijacking. The interview can be viewed in the player below!

It looks like a routine day at work for Tobias (Gordon-Levitt), a soft-spoken young American co-pilot on a flight from Berlin to Paris as he runs through the preflight checklist with Michael (Carlo Kitzlinger), the pilot, and chats with Gökce (Alyn Tezel), his flight-attendant girlfriend. But shortly after takeoff, terrorists armed with makeshift knives suddenly storm the cockpit, seriously wounding Michael and slashing Tobias’ arm. Temporarily managing to fend off the attackers, a terrified Tobias contacts ground control to plan an emergency landing. But when the hijackers kill a passenger and threaten to murder more innocent people if he doesn’t let them back into the cockpit, this ordinary man faces an excruciating test.

The movie also stars Carlo Kitzlinger (Berlin, I Love You) and Alyn Tezel (X Company). 7500 is directed by Patrick Vollrath (Everything Will Be Okay) who co-wrote the film with Senad Halilbasic (Fatalis).

Jonas Katzenstein and Maximilian Leo of Augenschein Filmproduktion produced the film, while Franz Novotny and Alexander Glehr served as co-producers.

7500 is available to stream on Amazon Prime Video now!