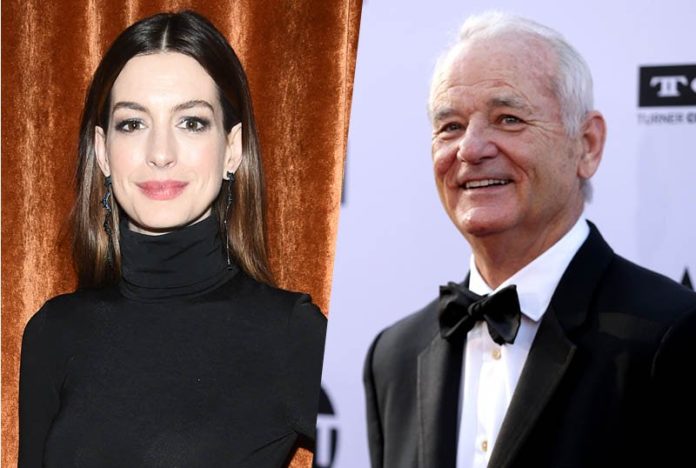 Though having previously both appeared in Get Smart, Anne Hathaway (Ocean’s 8) and Bill Murray (Ghostbusters: Afterlife) are partnering up for the first time as they have signed on to star in the upcoming buddy comedy Bum’s Rush from Aaron Schneider (Greyhound), according to The Hollywood Reporter.

The film, which is being penned by C. Gaby Mitchell (Get Low), will center on a custom boot maker (Hathaway) as she crosses paths with a stray dog named Bum, who will be voiced by Murray. In addition to seeing Murray and Hathaway leading the cast, Oscar winner Robert Duvall (Widows) is currently in talks to star in the indie buddy comedy.

“We are all dog lovers on this team, and now more than ever we appreciate their value in our lives,” producers Sarah Green and Mitchell said in a statement. “We are excited to join forces with Rocket Science and CAA to bring this timely story to the world.”

The project marks a reunion for Duvall, Murray, Mitchell and Schneider after the group all worked together on the acclaimed 2009 indie dramedy Get Low, on which Schneider made his feature debut on, Mitchell co-wrote with Chris Provenzano and Scott Seeke and Duvall and Murray both starred, with the former receiving rave reviews for his performance.

“I am so happy to reunite with my Get Low collaborators Robert Duvall, Bill Murray and C. Gaby Mitchell and of course delighted to work with Anne Hathaway and Sarah Green,” Schneider said in a statement. “It’s a very special project and I’m thrilled to be a part of it.”

Plans are to shoot the film on location in Santa Barbara and New Mexico, with CAA Media Finance shopping the domestic rights to the series and Rocket Science handling international sales at the virtual Cannes market.