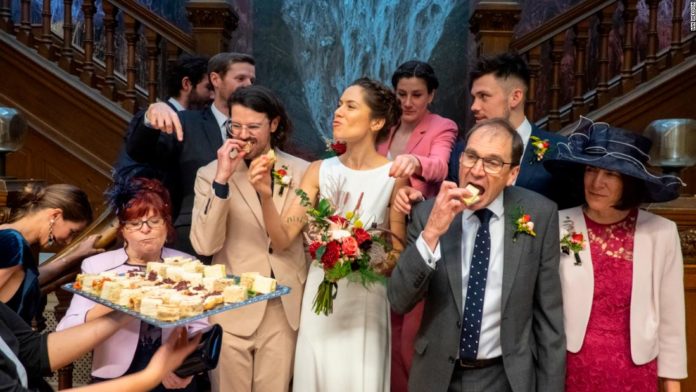 Ripped trousers, last-minute cigarettes, grandmas on the dance floor — these are not your typical wedding photos.

But then again, the title of Ian Weldon’s upcoming photo book and exhibition at the Martin Parr Foundation makes it clear: “I Am Not A Wedding Photographer.”

Weldon may photograph a lot of weddings but his photos capture moments of spontaneity and hilarity in a candid style more typical of documentary photography.

A photographer for 15 years, Weldon enrolled in his first photo class “more to make (him) look cool” than out of serious artistic ambition.

CNN Style chatted with Weldon about how his work has evolved, the “democracy” of photography and how his tools influence his art.

A hungry wedding party bites into canapes — the type of moment usually left out of wedding photos. Credit: Ian Weldon

CNN Style: What aspects of wedding photography appeal to you as a photographer?

Ian Weldon: Weddings are this melting pot of emotions and reality, happiness and sadness. Everything that I could find in many other different projects was all here in one place. And then when you add alcohol to that — it becomes something else, you know? I learned more about photography and myself shooting weddings than I did any other time in my life. And continue to do so.

In your view, how has the lucrative wedding industry evolved for photographers?

The wedding industry is driven by trends and fads, whatever’s popular at the moment. So, the most popular photographers within wedding photography (are) able to take what’s popular and produce a really high-quality product. That’s a great thing; there’s nothing wrong with that. But for me, that’s just commercial photography, it’s not really a document of the day. And when we’re applying a template to every wedding, and every wedding looks the same, then I don’t really feel that the couple is getting anything special from that.

Your photos capture lots of very spontaneous moments. Do you find that people feel pressured to act a certain way when a photographer is around? How do you get those candid shots?

Even James Nachtwey, the war photographer, said that people will act up for the camera. We can try as much as we like to be completely candid, but if people see you, they will act out a kind of scene. What I do is try and embed myself into the situation and be part of the day. By turning up to a wedding and not having any real preconceived idea of how it’s going to be shot, and just responding to the people and the personalities and the surroundings, then I can get closer, physically, as well as emotionally, to the people I’m working with.

Do you have a favorite photo from the series?

There’s the one with the young girl pulling a funny face. Her little teeth are just coming in, and she has a missing tooth. I really liked the irreverent nature of (her) attitude. There’s another one of the bride who’s sitting down and behind (her) there’s a couple just really going for it. Those two photographs were shot at the same wedding. That was one of the first weddings that I shot where I realized that I could be shooting stuff other than the standard, expected wedding shots. I was slightly unsure about presenting those images to the couple, but they loved them. I thought, there are other people who are on the same wavelength, who don’t want traditional standard wedding photography.

An image characteristic of Weldon’s irreverent style. “We don’t have to take it all too seriously,” he said. Credit: Ian Weldon

How do you find your clients, and what kind of relationship do you form with them before and during the wedding?

I think they find me. The people who are willing for me to come along and just do what I do are few and far between. So if they “get” me, and what I’m doing, I’m gonna get them. I think what any artist hopes to achieve is that their art is a reflection of them. I like to get involved, talk to people, be a part of the day. I mean, sometimes I’m dancing on the table in the evening with everyone else.

How do your clients react to seeing your photos?

Somebody mentioned the other day that they were excited to see the photographs of their wedding because they didn’t know what they were going to get. And I think that’s a really important aspect of what I do. I like it when people get back to me and say that I’ve captured the personalities of the people.

You’ve previously mentioned what you call the “democracy of photography.” Can you explain what that means?

(Traditional wedding photographers) deem the picture of the ring as an important shot and dismiss the other stuff, like a doorknob, the entrance to the venue or a grandmother with a hairdryer on her head. To me, all the photographs are as important as any other photograph. Everything in that situation will mean something to that couple on the day. So, the kid picking its nose is as important as the bride getting a hug from her father.

Weldon pursues photos that he says “would be dismissed as mistakes by most wedding photographers, or unusable, or unflattering.” Credit: Ian Weldon

How did your wedding series coalesce into a book?

Then a year ago, I get a phone call from (acclaimed British photographer) Martin Parr. It took me aback a little because Martin is a photographer who changed my perception of what photography was, or what photography could be, and in doing that fundamentally changed me as a human being. Martin wanted to show the work at his gallery, and it was his suggestion to have a photo book. That’s kind of how it all came about, and it wasn’t really by design — it’s just how it happened.