Home Culture Blackface in Hollywood has never been funny. People are just admitting it... 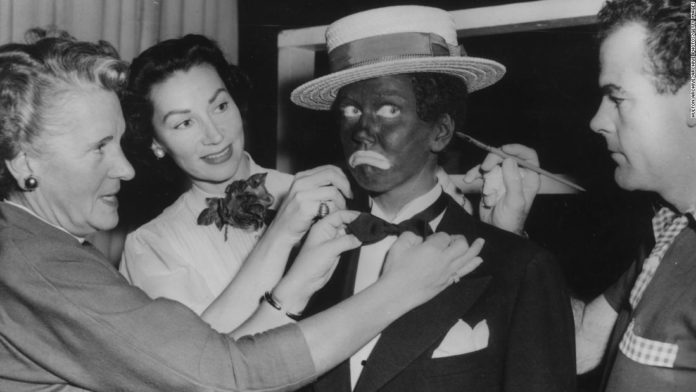 I am just as weary as Black people are of pointing out to White people that you can dress up for Halloween as a Black (or brown) celebrity without darkening your skin.
I wrote about what now seems is annual outrage over just that in 2013 when dancer/actress/reality show judge Julianne Hough did just that as part of an “Orange is the New Black” costume she donned.
It’s also not cool when a person of color does it, as was the case with Afro-Latino actress Zoe Saldana who I wrote about in 2016 when she darkened her skin to portray singer and activist Nina Simone in a biopic.
Not even Drake gets a pass.
The rapper faced a firestorm in 2018 after a 2007 image of him in blackface surfaced — despite his explanation that it was an attempt by him and his then best friend, Sudanese actor Mazin Elsadig, “to highlight and raise our frustrations with not always getting a fair chance in the industry and to make a point that the struggle for Black actors had not changed much.”
That’s because the pain tied to the legacy of blackface is very real and very present for Black people.
While White people may have been tickled by it, the practice of blackface has always been met with derision by many Black people.

The reckoning over racial injustice has now caused some introspection which recently led Jimmy Kimmel to apologize for performing skits in blackface and Tina Fey to request episodes of her “30 Rock” series that contained scenes with actors in blackface be pulled.
Nsenga Burton, a professor of film and media studies at Emory University in Atlanta, Georgia told CNN you’d have to be living under a rock to not understand how offensive blackface is to the Black community.
“I think people are finally understanding the connection or making the connections between this racist, symbolism and imagery that’s been out here for well over a hundred years with what is happening to Black people in society,” said Burton, who is Black, and like Fey an alumna of Northwestern University.
“People are just finally making that connection based on how extreme the violence against Black people has been and are now willing to understand the ways in which these systems of oppression work together and are held together by institutions, including the Hollywood industry,” she said.”Entertainment is an institution.”
Minorities, especially Black people, have long been the punchline of Hollywood’s jokes.
The use of blackface began in the mid-19th century, when performers would darken their skin and exaggerate their lips as part of traveling minstrel shows.
Racist audiences were not interested in seeing Black people perform onstage. But were entertained by actors made to look Black who would sing and dance like “the darkies.”
The practice eventually spread to Black actors who would use the makeup to hide their actual race from audiences. That evolved to Black actors showing their faces, but taking on stereotypical roles using exaggerated Black dialect that was in many ways “vocal blackface.”
Vaudeville gave birth to Hollywood which serves as a microcosm of the world.
Burton pointed out that the industry “is built on a foundation of White supremacist notion and thinking, and it was always created to serve and satisfy that perverse need for Black people to be the butt of the jokes and to normalize power relationships.”
“So while people have very candid conversations about gender and how Hollywood normalized gender relationships and representations and those types of issues, they still have not been as excited about admitting that racism is also foundational in Hollywood,” she said.

So foundational that only last year Tyler Perry was celebrated for becoming the first Black owner and head of a major studio and even the most successful Black performers have had to make choices regarding whether or not to “grin and bear it” when it comes to portraying racial stereotypes if they want to work.
In 2005 Dave Chappelle talked to Time magazine about why he walked away from his astronomically popular Comedy Central show that year at the height of his success.
He told the publication the last skit he had shot for his show before abandoning his series was about “magic pixies that embody stereotypes about the races.”
“The black pixie — played by Chappelle — wears blackface and tries to convince blacks to act in stereotypical ways. Chappelle thought the sketch was funny, the kind of thing his friends would laugh at,” Time writer Chris Farley noted. “But at the taping, one spectator, a white man, laughed particularly loud and long. His laughter struck Chappelle as wrong, and he wondered if the new season of his show had gone from sending up stereotypes to merely reinforcing them.”
Chappelle lamented at the time that “When [the White man] laughed, it made me uncomfortable” and said he told himself he needed to take a timeout “Because my head almost exploded.”
He would not return to his career until 12 years later.

Actor and writer Allen Maldonado understands that struggle.
Best known for his roles as Curtis on the ABC comedy “Black-ish” and Bobby on the TBS comedy “The Last O.G.” (TBS is owned by CNN’s parent company), Maldonado has also served as a writer for “The Last O.G.” and the Starz series “Survivors Remorse.”
He told CNN that Kimmel and Fey’s moves to disavow blackface are important given that they are “powerful white influencers” who can use their privilege to help change the culture.
And while he said he’s been fortunate to work in diverse writers rooms, Maldonado said there needs to be both more representation and trust in those already representing to ensure that biased and insulting content doesn’t make it’s way onto the screen.
People in power just need to step out of the way,” Maldonado said. “Get out of the way sometimes and really trust the Black voices in your room to be like ‘Hey, this isn’t cool, this isn’t funny.’ They need to be adding more Black, Latino, and Asian voices because we all need to get in there and have a shared voice in the room when we create entertainment, because entertainment has such a large impact on society and how we view things.”
So as society goes, so should Tinseltown if there are any hopes of transforming a moment into a movement.