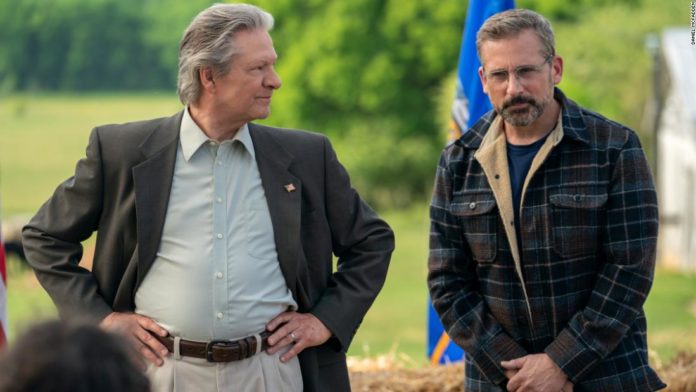 Reunited with his one-time “The Daily Show” colleague Steve Carell, Stewart picks off (and on) familiar targets. That begins with media excesses, from the hosts on Fox News to glimpses of a CNN panel with more pundits sharing the screen than “Hollywood Squares.”
The main focus, however, is on political gamesmanship, embodied by consultant Gary Zimmer, played by Carell. Shown in pictures alongside Bill Clinton, it’s clear he possesses juice in Democratic circles, which makes his latest mission unlikely.
Zimmer has identified a Wisconsin farmer (he’s introduced with the chyron “Heartland USA”) who espouses progressive values in a viral video. That clip inspires Zimmer to convince the retired Marine colonel, Jack Hastings (Chris Cooper, at his aw-shucks best), to run for office in his small town.
Why the small-potatoes candidate? Because it’s all part of a bigger game, using Jack to “road test a moral rural-friendly message” for the national stage, even if that means having to quiet cows in order to shoot folksy TV spots.
This master plan, however, doesn’t evade detection, as a rival Republican consultant, Faith Brewster (Rose Byrne), descends on the town as well, mounting a counter-offensive.
What ensues is a pitched battle between the two parties, throwing resources at a tiny hamlet where the residents — among them Jack’s protective daughter (Mackenzie Davis) — appear alternately mystified and bemused by the process. (The quality cast includes Topher Grace and Natasha Lyonne in smallish roles on the consultants side of the ledger.)
After interrupting his “Daily Show” stint to direct the little-seen “Rosewater,” Stewart is on somewhat more commercial turf here. That said, the liveliest sequence actually comes during the closing credits, when Stewart appears on camera interviewing an election expert in what amounts to a tutorial about what you’ve just watched.
Carell is fine, but the whole fish-out-of-water formula — first with him in farm country, later with the colonel accompanying him on a fundraising trip to court big-city donors — doesn’t feel particularly inspired. It’s too “Green Acres”-ish for its own good.
In some respects, “Irresistible” is a victim of high expectations. It’s mostly entertaining, and reasonably smart; still, for those who miss Stewart spinning out lacerating satire four nights a week, this doesn’t rise a level that would justify giving that up, the grind of it all notwithstanding.
Heading into campaign season, Stewart has certainly served up food for thought — especially about the media-fueled transformation of politics into entertainment and tribal warfare. Like his advocacy for 9/11 first responders, he’s also made clear that he’s less interested in scoring partisan points than exposing systemic flaws, though it’s difficult to discuss the latter without wagging fingers at those responsible for them.
Ultimately, though, “Irresistible” seeks to sway hearts and open minds, and perhaps inevitably winds up preaching — and yes, that’s the operative term — to the choir. As road tests go, Stewart’s movie passes inspection, but just barely.
“Irresistible” premieres June 26 on demand.

Dr. Oz helped save a man who collapsed at a New York City-area airport