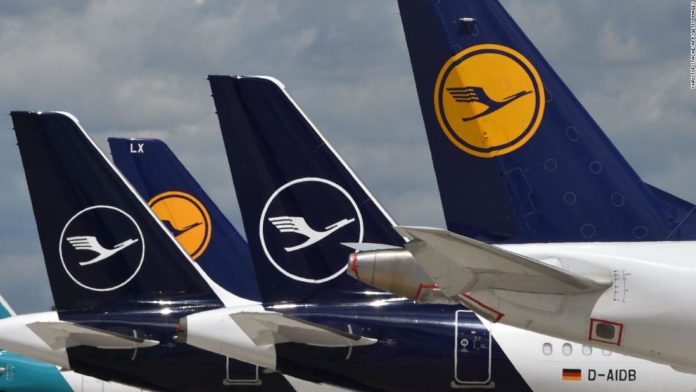 Billionaire businessman Heinz Hermann Thiele had opposed the rescue package, which will give the government a 20% stake in the airline and dilute the value of his own 15% holding. But with just hours to go before the vote, he relented, paving the way for the deal to be approved. Shares in the company closed 7% higher in Frankfurt on Thursday.
At the virtual meeting of shareholders, Lufthansa CEO Carsten Spohr appealed for support. “We are asking for nothing less than your approval to save Deutsche Lufthansa,” he said.
The uncertainty over Thiele’s vote forced Lufthansa (DLAKY) to take some extraordinary steps. It brought forward the disbursement of staff salaries by three days this month to “guarantee payment” in the context of the “uncertainties” surrounding the bailout, Spohr wrote in a letter to employees seen by CNN Business.
Time was running out. Lufthansa lost €1.2 billion ($1.3 billion) in the first quarter and said last month that it was burning through €1 million ($1.1 million) in cash every hour. It had €4 billion ($4.5 billion) in cash on May 5.
“We simply don’t have any money,” Lufthansa chairman Karl-Ludwig Kley told shareholders during the meeting on Thursday. Reserves amassed during good years would soon be depleted and, without government help, insolvency looms, he added.
Shareholders owning 39% of the company’s stock voted almost unanimously to back the bailout. Accepting the deal on the table was the “rational decision under the circumstances,” said Per-Ola Hellgren, an investment analyst and director at German bank Landesbank Baden-Württemberg.
Voting against the deal would have meant “taking a big risk,” potentially forcing Lufthansa to start insolvency proceedings, he added.

Global aviation is not expected to recover from the pandemic for several years. Lufthansa, which owns airlines in Germany, Switzerland, Austria and Belgium, is planning a sweeping restructuring program that would trim its fleet by 13% and could result in as many as 22,000 job cuts. Kley said that 80% of its fleet is still grounded.
The company said in a statement Thursday that it has reached an agreement with UFO, one of the labor unions that represents flight attendants, that will save €500 million ($562 million) in costs while guaranteeing no forced layoffs for four years. The savings will be achieved through buyouts, pay freezes, reduced hours, unpaid leave, early retirement and a temporary cut in pension contributions.
Spohr told shareholders that the company is on course to reach a similar agreement with the pilots’ union VC but he said negotiations with a third union, Verdi, have been “disappointing.”
The group’s airlines carried 145 million passengers in 2019, and play a vital role moving cargo into and out of Europe. “Politicians know how important Lufthansa is to Germany as an export nation,” Spohr said.
The group has secured a $1.5 billion loan against a Swiss government guarantee and is receiving a €450 million ($507 million) package backed by the Austrian government. It is still in talks with the Belgian government.
Germany’s bailout will give the government the right to appoint two members of the company’s supervisory board, which analysts have said could hamstring restructuring efforts.
Lufthansa risks being less competitive and less able to attract investment in future if restructuring plans are delayed, said Neil Glynn, head of European transport equity research at Credit Suisse.
— Fred Pleitgen and Eoin McSweeney contributed reporting.

How to save your M1 Mac by booting into Recovery mode