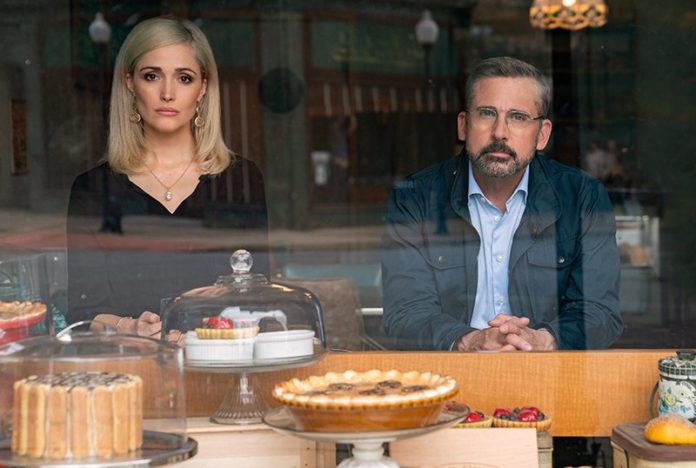 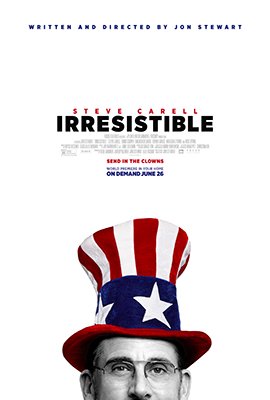 Will Sasso as Nick Farlander

Will McLaughlin as Captain Ortiz

Written and Directed by Jon Stewart

Jon Stewart was one of the most prolific and informative voices in the political world for over 15 years as the host of Comedy Central’s The Daily Show and after making his directorial debut with the thrilling and powerful Rosewater, he’s back in his original comedic wheelhouse with the timely but unfortunately only mildly funny political satire Irresistible.

After the Democratic National Committee’s top strategist Gary (Steve Carell) sees a video of a retired Marine colonel (Chris Cooper) standing up for the rights of his town’s undocumented workers, Gary believes he has found the key to winning back the Heartland. However, the Republican National Committee counters him by sending in his brilliant nemesis Faith (Rose Byrne) and a local race quickly becomes a fight for the soul of America.

The film’s setup is brilliant and well-timed as America prepares itself for another divisive presidential election and while Stewart and his successor Trevor Noah are well-known for reacting with plenty of energy and well-researched retorts to headlines, the 57-year-old writer/director reins it in with this project and it initially works. In portraying both sides of the aisle, no one is safe from his pointed insight, from democratic elite talking down to a demographic they so clearly need and republican strategists unafraid to alter facts as needed to win a campaign.

This satire initially proves genius and relatively funny, but as the film progresses, it finds itself waning and unable to blend its attempts at more audience-friendly humor, with Carrell’s fish-out-of-water Gary revisiting a number of tropes his character type has previously been used for in better fashion. That’s not to say that all of this humor is uninteresting, as some of it works and even some of the weaker material still warrants a smile or a chuckle, but in trying to rein in his anger towards the Republican party and the presidency of Donald Trump, there’s no real edge to it. The closest viewers get to some sharp humor is crass barbs between Gary and Faith which, while generally funny, comes nowhere close to properly using their genre gifts, instead relying on loud arguments and bets over sexual favors before returning to its serious-natured satire.

Despite clearly having done additional research on everything from political strategists to the easily corruptible nature of political action committees, the story can’t quite find any interesting path to take this important information. Chris Cooper’s Jack Hastings giving a speech on the government’s broken system of trying to prevent voter fraud with undocumented workers without giving them an appropriate system to become documented citizens is moving and incredibly timely, especially given the current president’s claims of voter fraud leading up to and after his election, but it feels like the only really interesting story thread. Middle and rural America is an area not often explored when diving into politics and Stewart attempts to properly spotlight it and show their more progressive way of thinking, and though he occasionally taps into this goal nicely, it’s an effort that still overall falls flat.

Where some of the film’s humor and storytelling falters, it is frequently saved by the performances of its thoroughly talented ensemble, namely Cooper in a role we’ve frequently seen him take on but yet he shines in every time. The 68-year-old Oscar and Golden Globe winner has always been great at tapping into the soul of the American midwest, but in the role of Jack Hastings, it feels like an angle not previously seen from him. He brings to life a new form of the heart of America, one which seeks to bridge the gap between the often-conservative generation of the past and the more-liberal generation of the future, and it results in one of the warmest and most charming performances of his career.

Irresistible could’ve benefitted from some more rage from its writer/director in its scripting and humor and figuring a better path for some of its political satire than its late-in-the-game plot twist, but thanks to warm direction, generally charming performances and some rich humor, it proves to be a mildly entertaining affair.