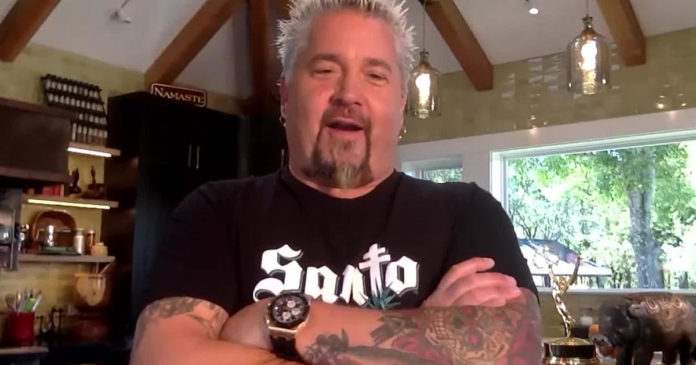 Everything about Guy Fieri, it seems, is BIG – from the way he talks, to his love of tattoos, to his success on television. As host (since 2006) of Food Network’s “Diners, Drive-Ins and Dives,” he’s taken his cherry red Camaro to joints across America, visiting roughly 1,300 places, give or take.

In Santa Fe a few years back, he ran into acting legend Gene Hackman. But it’s the eateries themselves that get top billing here.

Correspondent Mo Rocca asked, “Why do these places matter?”

The “Triple-D effect,” as it’s known, on these establishments is real. In 2008 Fieri dropped in at Alcenia’s in Memphis, Tennessee. Betty Joyce Chester-Tamayo is the owner. “That show probably has been the biggest impact on Alcenia’s,” she said. “Alcenia’s has been really, really blessed.”

Now, it’s tempting to make all sorts of assumptions about Fieri. Rocca asked, “What do people think you eat?”

And that’s not what he eats? “No, not at all!” Fieri said. “Veggies are my game. Love salad. Love spaghetti squash. Love all the whole grains. Big farro fan!”

This isn’t so surprising when you consider his upbringing. Born Guy Ferry (he changed his last name to Fieri to honor his immigrant grandfather), he was raised in the small Northern California town of Ferndale, by parents he describes as hippies.

“We drove a van, and they had a hide of leather, and they made candles,” Fieri said. “They owned a leather shop. How much more ‘hippie’ can you get than that?”

As a teenager, he operated his own pretzel cart. When he was 26, his parents mortgaged their home to help him open his first restaurant.

In 2005 he was encouraged by friends to audition for a reality show. Rocca said, “I am told that your audition for ‘Next Food Network Star’ just wowed people, because you were so easy and natural on camera.”

“I’ll tell you what a lot of it is: you talk to people the way you wanna be talked to,” said Fieri.

He says he didn’t expect to win. “You know, I’d never been to New York. And I’m standing with all these chefs!”

He did win, and it’s been quite the ride ever since.

He’s been parodied on “Saturday Night Live” … and actress Melissa McCarthy said she based her Oscar-nominated performance in “Bridesmaids” on Fieri.

But there’s also been less flattering attention, including a scathing 2012 New York Times review of his now-closed Times Square restaurant. Negative press inspired this defense from stand-up comedian Shane Torres: “He goes around the country to small businesses and gives them free advertising on a national platform on a weekly basis. … But because his hair looks like he was electrocuted while drinking Mountain Dew, people act like we need to saw his head off and put it on the internet.”

But over the years the knocks have been drowned out by praise for Fieri’s big – make that HUGE – philanthropic work. He’s raised money for intellectually-disabled children. He’s received the Make a Wish Foundation’s highest honor. And during the California wildfires of recent years, he served thousands of meals out of the same mobile kitchens he’s using to feed hospital workers now.

So far, he has helped raise nearly $24 million.

“I started sending out personal video messages to all the CEOs that had any connection to the restaurant association: Pepsi, Coke, Cargill, Keurig, Dr. Pepper, you name it,” Fieri said. “I’m standing right here and I’m doing it. My wife, my kids are sitting here having dinner and they’re like, ‘You’re really losin’ it.’

“And so anyhow, the next morning we have a conference call. And they said, ‘Pepsi just sent us a million bucks.’ I’m not kiddin’ ya, I had to pull over to the side of the road!”

Eric Ripert, the co-owner and chef of the world-renowned Le Bernardin in New York, said of Fieri, “He has a huge personality, and a big heart. And the last time I saw him actually, he gave me a very warm hug. He has this incredible persona that’s magnetic.”

If you’re surprised to hear the triple-Michelin-star-winning chef singing the praises of the star of Triple-D, don’t be: “If I may make an analogy, you have musicians who play jazz, classic music, pop music, hip hop, you name it,” Ripert said. “Fine dining probably is closer to classic music, and what Guy is doing is probably closer to pop music in a sense.”

At 52, this married father of two is respected as never before. But not to fear; he’s still one boisterous guy.

Rocca asked, “Have you surprised yourself at how successful this has been?”

Fieri replied, “I wanna be very mature and tell you, ‘No, I’ve always had this in mind that it would be like this.’ And then I’ll tell ya’, like the little kid, ‘I’m out of my mind!'”