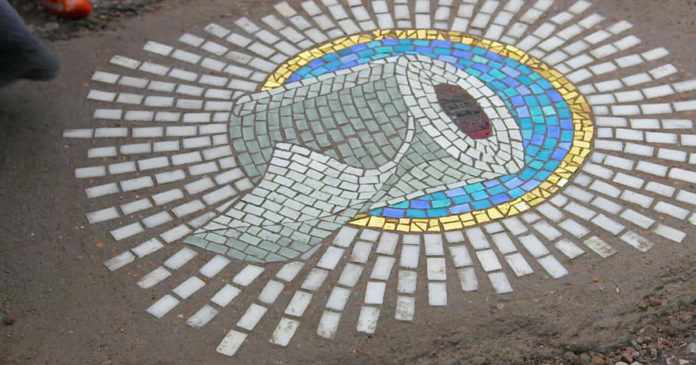 In his vintage Ford pickup, Jim Bachor is on the prowl looking to find what most drivers hope to avoid: Potholes.

“There’s a trio [of potholes] right behind me that look perfect,” Bachor said.

Perfect potholes? Preposterous. But Bachor may be the only person behind a steering wheel who sees car-eating craters as potential canvases.

“I’m completely subservient to the pothole gods,” he said. “Whatever is served up to me, I’ve gotta deal with.”

He’s a true street artist in every sense of the word. Since 2013, on city streets in Chicago and elsewhere, Bachor has been filling potholes with mosaics, depicting everything from popsicles to pop stars.

As cars drove by, correspondent Lee Cowan asked him, “You ever feel a little vulnerable out here?”

“Sunday Morning” first met Bachor, naturally, playing in the middle of the street a few years ago.

Cowan asked, “So, since the last time we talked, how much has your visibility gone up?”

He’s filled nearly 90 potholes with his work so far, one tiny piece of marble and glass at a time. But the streets are quieter now than they used to be, and are empty of laughter, too – which is where his latest works come in.

His toilet paper mosaic became so popular he’s now put it on iPhone cases and made puzzles, even fine prints.

“Somebody put it this way which I thought was kind of an interesting way: They wanted a souvenir of these times to look back on,” Bachor said. “Doesn’t matter who you are, everybody can relate to toilet paper.”

Just like everybody can relate to hand sanitizer. Meet the Purell Pothole:

Cowan asked, “You’re not trying to make fun of it, though?”

“Oh God, no. It’s really trying to pull out the positive out of a negative.”

To do it he’s quite literally paving the streets with gold – gold leaf, that is.  Each work gets a halo – the full saintly treatment for products that, after all, are a holy miracle these days to find.

“It says so much even though it’s so simple,” Cowan said.

“It does, totally,” Bachor said. “That’s what makes it so fun and unique, you know? It’s so specific to these times.”

Times we all hope will be temporary … just like his work. “Even in the best of cases, pieces of pothole art probably last about, at best, four or five years. And then streets just get repaved.”

With luck, the virus will be paved over, too, with a vaccine, or at least some kind of treatment.  In the meantime, Jim Bachor will stay on his knees out in traffic, trying to make our lives a little less bumpy.

Cowan asked, “How long do you think you’ll keep doing this?”

“I’m gonna do it till the day I die, until I can’t,” Bachor replied. “I wouldn’t say it’s a good way to make a living, but it’s a great career! You know, when you love what you do and a lot of people like what you do, how could you not continue to do that as long as possible as an artist?”