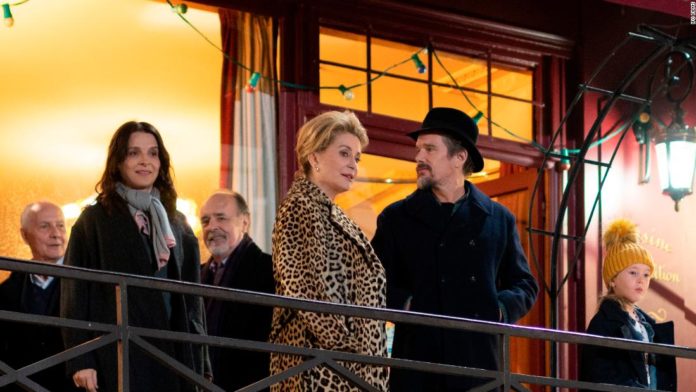 Playing an aging star estranged from her daughter might not seem like a major stretch, but Deneuve and Japanese writer-director Hirokazu Kore-eda (whose “Shoplifters” took top honors at the Cannes Film Festival) spin that premise into a cinematic breath of fresh air.
Still, Deneuve totes her share of baggage to the screen. In 2018, she joined a group of women who signed an open letter denouncing what was described as growing puritanism and “hatred of men,” drawing distinctions between sexual assault and “clumsy flirting.”
Published in the French newspaper Le Monde, the letter drew a sharp response from feminist activists. Deneuve subsequently apologized to sexual-assault victims, saying she never intended to give the impression of justifying harassment.
While that episode was messy from a public-relations standpoint, everything about her latest film is utterly simple, yet nevertheless moving. Much of that has to do with the unapologetic nature of Deneuve’s Fabienne, who — essentially told that she was a lousy mother — makes clear that she was also a movie star, and that’s where her priorities lay.
Dredging up that history happens when her daughter, Lumir (Juliette Binoche, also sensational) returns to France from New York with her actor husband (Ethan Hawke) and their young daughter (Clementine Grenier). They’ve ostensibly come to celebrate the release of her mom’s memoir, but they find Fabienne in more of a snit than usual, having taken a supporting role in a science-fiction movie she doesn’t like, featuring a young starlet (Manon Clavel) who she resents and envies.
The movie within the movie is also about a mother-daughter relationship — albeit with a futuristic twist — that stokes and informs the tension between Fabienne and Lumir. “What a pain. Takes herself way too seriously,” Fabienne mutters during a terse early exchange between the two. “Who does she get it from?”
Adding to the problem, Fabienne’s longtime butler-handler Luc (Alain Libolt) abruptly walks off the job when she fails to even acknowledge him in her book. That creates a reason for Lumir to stick around, helping squire her mother through the movie-making process, while trying to rein in her dismissive, imperious attitude toward practically everyone around her.
Mostly in French with some English thrown in, “The Truth” (or “La Verite” in France) might violate “Seinfeld’s” “no hugging, no learning” rule, but it earns that by providing sprinkles of humor and sadness. The film also suggests that childhood grudges and old wounds we harbor — especially toward parents and family members — can be skewed by the passage of time. “You can’t trust memory,” Luc, who has seen it all, tells Lumir.
The lion’s share of films redirected to streaming and on-demand platforms since the coronavirus closed theaters, frankly, haven’t been very good, making the Oscars’ one-time-only exception — considering movies first exhibited at home as potential nominees — largely moot.
Deneuve’s career-capping role, by contrast, is by all rights the kind that should have award voters abuzz. It’s a performance that’s not soon forgotten, with the X factor being what memories linger about other aspects of her history.
“The Truth” premieres July 3 in select theaters and on demand.