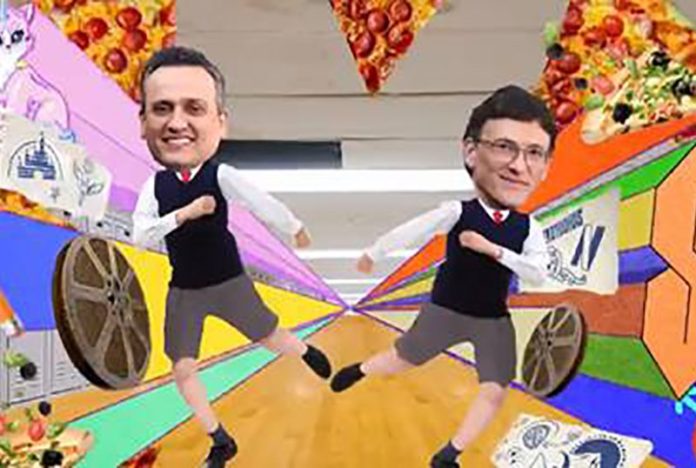 The Russo Bros. Pizza Film School is back this week with a thrilling new episode centered on the Coen Brothers’ acclaimed adaptation of No Country for Old Men, as well as featuring the debut of the series’ theme song, created in collaboration with rapper KYLE! The theme song and intro can be viewed in the player below! Click here to rent or purchase No Country for Old Men!

This week’s assignment from the directing and producing duo is the Coen Brothers’ adaptation of Cormac McCarthy’s acclaimed 2005 crime thriller novel centered on a hunter (Josh Brolin) who comes across the grisly aftermath of a drug deal and takes the cash left behind, inadvertently marking him as the target for a merciless killer named Chigurh (Javier Bardem) and aging lawman Sheriff Bell (Tommy Lee Jones), who is reflecting on a changing world and a dark secret of his own.

The Russos would go on to work with Brolin in the Marvel Cinematic Universe, in which the Oscar nominee starred as the Mad Titan Thanos in three of the four Avengers films, with the latter two helmed by the duo. Though long prior to their involvement in the MCU, Jones would also go on to star in Captain America: The First Avenger, the introduction film to the titular hero portrayed by Chris Evans.

The weekly show on Instagram TV and YouTube created and hosted by Joe and Anthony Russo (The Russo Brothers) aims to educate and spread some love to favorite classic films, as well as local pizzerias while movie lovers are stuck at home during the pandemic.  The Bros will assign a movie for the class every week, and tune in with guests to talk about how different flicks have transformed their relationship to cinema, while enjoying pizza from a local pizzeria

Previous movies discussed on the show include La Haine, Ronin, The Evil Dead and most recently The Empire Strikes Back featuring Luke Skywalker himself, Mark Hamill. The Russos have been joined on other episodes by film critic Pete Hammond and the screenwriting duo Christopher Markus and Stephen McFeely, who also serve as Co-Presidents of Story for AGBO.

The next episode is set to air this Friday, July 3 at 12 p.m. PST on Instagram TV and previous episodes can be viewed on their YouTube page here!