Home World They were arrested for breaking lockdown rules. Then they died in police... 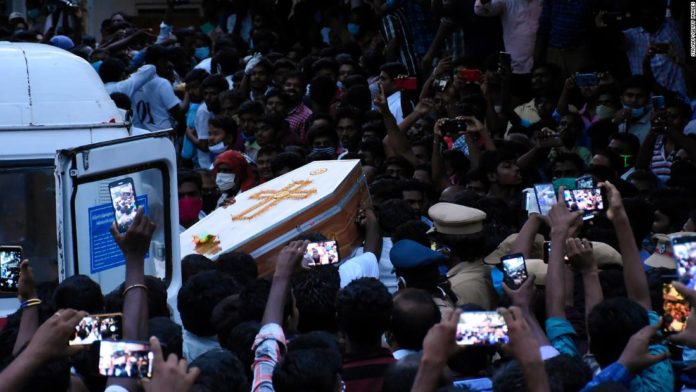 Indian police officers could face murder charges over the deaths of a father and son who were in custody after allegedly breaking coronavirus restrictions, a court has ruled.
On Tuesday, Tamil Nadu’s highest court said there was enough evidence to charge the police officers involved in the case with murder, based on the victims’ injuries and formal statements.
The deaths have renewed outrage in India over police brutality, with the men’s family members, politicians and human rights activists alleging officers tortured the pair before they died.
CNN has tried multiple times to contact local police for comment on the allegations. The initial police report notes that the men sustained their injuries during arrest. The officers have not commented publicly on the allegations.
According to court documents, two officers have been suspended and the state intends to transfer the case to the Central Bureau of Investigation, essentially India’s FBI.
In a statement Monday, non-profit Commonwealth Human Rights Initiative said the case showed the need for India to enact a strong law to prohibit and prosecute police torture and custodial death.
“It sends a chilling message about how broken the system is, the failure of police and political leaders to step up accountability measures for illegality,” India executive committee chair Wajahat Habibullah said in a statement.
Habibullah also called on India to ratify the United Nations Convention Against Torture.
Indian politician Rahul Gandhi offered his condolences to the family and appealed to the government to ensure justice for the two men.
“It’s a tragedy when our protectors turn into oppressors,” he said in a tweet last week.

On the night of June 19, Jeyaraj and his son Bennicks — who are only identified in court documents by their first names — were selling mobile phones at their shop in Sathankulam, according to court documents.
When they refused police requests to comply with coronavirus lockdown rules stating that stores must shut at night, they were arrested, according to the documents. Tamil Nadu has recorded more than 90,000 coronavirus cases and more than 1,200 deaths, making it one of India’s worst-hit states.
The father and son were remanded in custody the next day after they had a medical examination, according to court documents.
At 7.45 p.m. on June 22, Bennicks was admitted to hospital, where he died less than two hours later, according to court documents. Just over an hour after his son’s death, Jeyaraj was admitted to the same hospital and died early the next morning, the documents say.
It’s not clear how the two men died. The Madras High Court, the highest court in the state, ordered a post-mortem of their bodies, but the results have not yet been released.
In a video statement on local media, Jeyaraj’s daughter Persis — who only uses her first name — claimed her father was pushed to the floor and beaten by the cops.
According to Persis, when her brother, Bennicks, saw her father being beaten, he tried to stop it but was also attacked.

Police in India “routinely use torture and flout arrest procedures with little or no accountability,” according to Human Rights Watch.
CNN has reached out to multiple senior officers in Tamil Nadu on the brutality allegations against the father and son but got no response.
On Tuesday, the Madras High Court said that local police have been “attempting to cause disappearance of evidence.”
“In fact, they were emboldened enough to even intimidate the judicial officer to put spokes in the wheel of his inquiry,” the court said.
In 2018, the last year for which statistics are available, 70 deaths were recorded across India under police custody, according to the National Crime Records Bureau.
Tamil Nadu recorded 12 deaths — a disproportionately high number, given the state makes up about 5% of India’s population.
In India, some on social media have connected the deaths of Jayaraj and Bennicks to the killing of George Floyd by police officers in the United States, which has prompted protests against excessive use of police for against Black people there.
But Shashi Tharoor, a member of parliament and former representative of India to the UN, contrasted the reaction to the deaths in India, where the case has not sparked protests, to the global outpouring after Floyd’s passing.
“Compare the outrage the death of #GeorgeFloyd sparked across the world, w/the lack of national outrage here. Justice denied?” tweeted Tharoor.