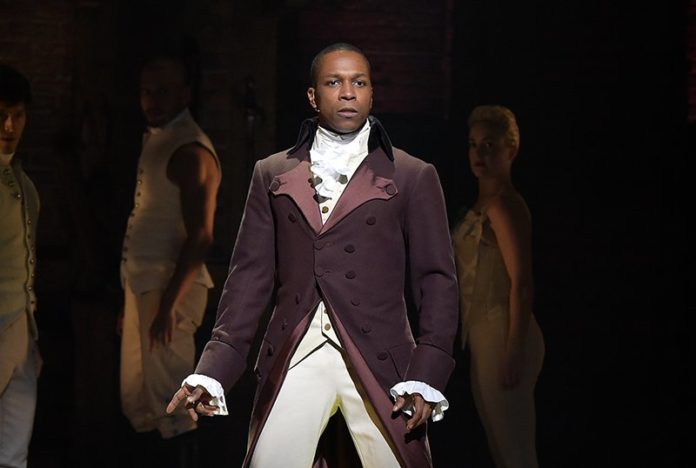 When the COVID-19 crisis reached America’s shores, Tony-award winning actor Leslie Odom Jr. had only just begun a nationwide tour in support of his album Mr., released late last year. The first album to include songs he penned himself, Odom Jr. didn’t hesitate to cancel all his remaining shows, even before his hometown of New York had itself issued a shelter-in-place order.

Throughout his career, Odom Jr. has made decisions where he trusted in himself, and his talent, to see him to his goal. He once turned down a starring role in Aida on Broadway in favor of completing his undergrad degree. After seeing an early staging of Hamilton at Vassar College, the confidence with which he pursued the role of Aaron Burr was more reminiscent of Burr’s relentless rival Alexander Hamilton, than of the character Odom Jr. would later portray so magnificently.

“Adversity is a teacher,” Odom Jr. said, following his announcement to postpone nearly all of the dates on his Stronger Magic tour. From this adversity has also come opportunity. Disney decided to move its premiere of the Hamilton movie, a filmed version of the stage show from 2016 featuring the original Broadway cast, from a theatrical release in October into the homes of Disney+ subscribers just in time for the July 4th weekend. It seems that, in the end, Odom Jr.’s singing will be heard across the nation this summer after all.

ComingSoon.net got to speak with the man, who brought a complex historical figure to glorious life in Hamilton, about his memories of the show, and the conversations it has inspired in both his personal and professional life.

ComingSoon.net: Leslie Odom Jr., hello! It’s such a pleasure to speak with you.

Leslie Odom Jr.: My pleasure. The pleasure’s all mine.

CS: So I first just wanted to ask, four years ago at this point, what do you remember most about your early days working on Hamilton?

CS: So what’s it like then revisiting this show specifically while America is in the middle of another revolution, what some are calling the largest civil rights protest in history?

Odom Jr.: Well, I think that part of that I’m waiting to see myself. As an artist, you don’t get to decide how your work is received or what mark it makes — you don’t get to decide that. And so, I was a part of a collective of people that made this, I think there’s 21 of us in the movie? And if you asked all 21 of us, there would be common ground for sure, but there would be also slightly different answers about what we hoped the movie was able to do and who it’s able to reach. So I think some of that is, as an artist you just make something that you love and that you believe in. And then, you have to wait and see how — if it matters. You have to wait and see if it matters if it’s going to resonate.

So I don’t know what it’s going to say to the streets, if it’s going to speak to the streets. I hope it does. I really do. You know, what I do know — and maybe this is enough — I hope it’s more, truly, but I do know: having seen it, they gave us the opportunity to screen it, I do know that it’s damn beautiful. And beauty, especially Black beauty and Brown beauty, those images are still political. They are still necessary. You know, I’m raising a kid right now. If you can imagine: my kid, we want my kid to watch movies, too. We want my kid to read books, too, okay?

So that’s first and foremost what I told Thomas Kail, from the bottom of my heart, is thank you for shepherding images of Black and Brown beauty into the world, because it is still necessary. As a father raising a kid, I search every day for things to show her that look like her, that are a reflection of who she is. And it’s like, don’t try to go back 30 years. Because the list is, you know what I mean? The list is small.

CS: You portrayed Aaron Burr, who was a slaveholder, who later fought for emancipation. And I wondered what that conflict was like for you, inhabiting that person as an actor and personally?

Odom Jr.: What a great question, what a great question. There’s dissonance. There’s dissonance and there is discomfort there, I have to tell you. But what I trusted was that that would make the performance and the show more interesting. Maybe I knew that it might sicken some people, that it might — I knew that it would be a part of a conversation. There is a tension in that piece, in the fact that we are playing slaveholders and we’re playing men — and there’s some women playing men, too, you know, some soldiers — we’re playing men that did some pretty indefensible things. But as you know, as an artist, I was obviously willing to take on the challenge for I think the greater symbolic victories of the piece, which are simply: it’s confronting, it’s challenging. It’s really the first question that needs to be asked is, okay, whose history is this?

Odom Jr.: Who gets to tell the stories? Let’s start there. Okay, you say this is a history, right? Well, who gets to tell it? We’re telling it this time and we’re using our own words, our own language to tell it. That’s the first step. The next step is we’ve looked at this history through such…there has been a very concerted effort to tighten that iris, to make sure that we are only looking at it, as it is told by the victors or the perceived victors. And so that iris is so small.

You open that thing up a little bit and you go, yes, where were the women? Were they just throwing parties for the men who did all these wonderful things? Like where are the statues of the women again? We were all there, right? And then you open that iris a little bit and you go, what were the Black people doing? I’m sorry, wait a second, there were Black people here, right? And were there no Black heroes? So there’s no Black heroes in my neighborhood? Where are the Black people? You know what I’m saying?

Odom Jr.: Lin, he started with, he started the conversation of, “Well, this is the history that we’ve all agreed on, right?” Okay, so these are the facts: as you’ve told them to me again and again. Okay, great. The first step is, now we’re going to take them and we’re going to tell the story in our own words. Are you okay with that?

Now let’s see what else we can talk about. Let’s see what else. So it’s really getting everybody to the table. Hamilton got so many people to the table because it’s so joyous and brilliant. And it set the table for us to have this conversation we’re having in the streets. It set a table for us. It’s common ground because so many people enjoy it, some people like it. And so, we end up all at the same Hamilton party. And what are you going to talk about once you’re at that party?

CS: You know, living in the Bronx, I saw hundreds of local high school students on their way to see Hamilton. It’s something the show worked really hard to facilitate. And I wonder, kind of jumping off what you were just saying, what were some of the most interesting questions they asked of you? Do you have any memories of that?

Odom Jr.: Yeah. I remember it was a little bit after I left, there was this young girl in Philadelphia who worked very hard to get to me. She was like, sending me private messages and she ended up finding a voice teacher of mine who was texting me. I was a little busy, but this young girl really wanted to ask me a question. And I finally got on the phone with her and she said, “So my friends and I talk about Hamilton a lot. And we feel like this show actually isn’t revolutionary at all. It’s just a bunch of People Of Color standing on the stage telling White people stories. What do you think about that?”

So you know, I loved it. I love stuff like that. I’m like, please bring it on, you know? So I love that she worked hard to get to me to ask me that question, to grill me a little bit. And all I could say to this young girl, this young revolutionary, was: Lin wrote the show that was on his heart to write. There is no doubt in my mind that in some time, someone is going to write the show that makes Hamilton look quaint. I have no doubt in my mind. I hope I live long enough to see that show. I said to her, “It’s your job.”

All Lin did was take the baton. Lin created an opportunity for himself and his brothers and sisters that never existed for him. Lin, a young Puerto Rican artist, a young talented actor, and musician. I mean, there are two shows for Lin to do, in the canon of musical theater, in the whole canon. Before he wrote [In the Heights and Hamilton]. You know, there’s literally nothing for him to do.

So all Lin did was take the baton from somebody. He ran his leg of the race, and now it’s your job to run your leg. You write the show that makes Hamilton look quaint. You write the show that answers all the questions that Hamilton didn’t have the courage to, or that you feel like it didn’t have the courage or the bravery to ask. Well, now that’s your responsibility.

CS: It seems to me that a running thread in your career has been how you trusted in your own worth, even when this may have put other opportunities that you had at risk. And that’s an easy thing to talk about, but hard to do. And I wondered what’s your secret?

Odom Jr.: Yeah, I’ve talked to young artists, men, just about not ignoring some sort of spiritual practice. And it’s not unrelated to what we see in the streets. It’s not unrelated. This thing, it works all of our lives. I know I’ve found as a man, there are going to come times where you can’t untie it, where you’ve done all that you can, where you’ve run your leg of the race. And in those situations in my life, I have depended on a God who has helped me through those moments, who has seen me through those moments, and the universe has only ever met me halfway. You know what I mean? More when I take one step for myself, God, the universe, takes two. It is the real stuff.

CS: So faith in something greater than yourself, trusting the process kind of a thing?

Odom Jr.: Absolutely. Absolutely. And I don’t pay lip service to a thing like that. It’s a real practice in my life.