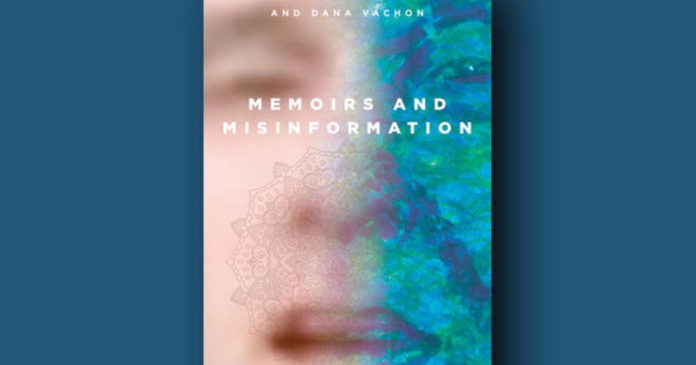 The comedian and artist Jim Carrey and writer Dana Vachon have fashioned a hybrid “semi-autobiographical novel,” a fantasia on Hollywood fame, studio machinations, celebrity personas and family history. “Memoirs and Misinformation” (Knopf) is a fever-dream tell-all about an actor named “Jim Carrey,” of which the “Truman Show” star promises, “None of this is real and all of it is true.”

Read the excerpt below (you may also listen to the audio book excerpt, read by Jeff Daniels). And don’t miss Tracy Smith’s interview with Jim Carrey and Dana Vachon on “CBS Sunday Morning” July 5!

A world before, he’d starred in a major summer spectacle, a movie that had effortlessly cruised to a $220 million global box office, with thirty-five percent of this fortune marked for Carrey personally, flooding into his financial reservoirs from distribution territories stretching, as was said, “from Tuscaloo to Timbuktu.” That the film was, even by his own estimation, firmly in his second tier only made its success sweeter: the greater the impunity, the closer to God.

He’d filled with the love of the crowd as the blockbuster rolled out and on, opening in London, Moscow, Berlin. He entered Rome as a slapstick Caesar, walking a hundred-yard-long red carpet where he saw a publicist crouching right in his path and – gauging the moment like a cliff diver the rising tide – tripped right over the guy, going down spread eagle, head and shoulder walloping the carper so hard that the crowd believed he’d died right in front of them. Lying there, Carrey thought of his uncle Des, shot and killed in a Bigfoot costume while on his way to prank a corn boil. Some lunged to help the star. Others just gasped. Carrey let their concern build before bouncing up like a coil and giving every subsequent interview with one eye crossed.

After, there was a dinner in his honor at the Quirinale Palace. A table for one hundred had been set by the president of the Italian republic. They’d all come for a brush with performative genius and watched, appreciatively, as at the head of the table, Carrey asked the veteran sommelier pouring wine into his glass if he could inspect the bottle. The man stopped and handed it to him. Jim sniffed the cork and examined the label, all of it just a setup for the moment where he plugged the bottle into his mouth and took a long chug before, with the face of a connoisseur, declaring, “Wonderful. They’ll love it.” They did. They roared, all of them: the Swiss art dealer and the Three Men from Merck and the waiters watching from the kitchen, where the cooks were laughing, too. And the Camorra enforcer who had, that week, put two bodie in the Tiber. And the Swedish ambassador’s husband. They laughed for this sudden relief from the burden of manners, and the laughter bound them across languages as they ate and drank on the marble terrace in the Roman night.

A twelve-piece orchestra played tangos, music that moves the owner of a dry-cleaning chain, a round woman, lonely in her late fifties, to decide, after three proseccos, that, having paid five thousand dollars to a corrupt senator’s even-more-corrupt secretary to be here, there was not reason not to approach Carrey for a dance. She moved toward him like a heat-seeking credenza, and something in the boldness of her spirit swayed Jim Carrey.

Pop culture nostalgia can help ease the pain of 2020

Cardi B on her ‘nasty’ song and building her music legacy

How Leslie Odom Jr. fought for fair pay for his ‘Hamilton’ movie performance

A Plan to Turn Military Bases Into ‘Sandboxes’ for 5G