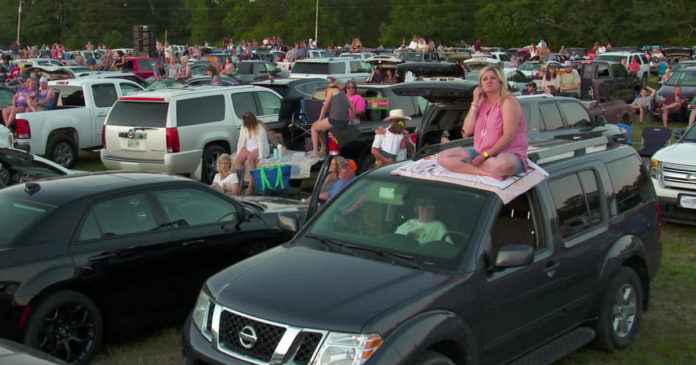 “How you all doin’ out there tonight?”

Country music superstar Alan Jackson has sold 60 million albums worldwide. But last month, he did something perhaps even more remarkable:

On back-to-back nights in Alabama, Jackson played to the largest American concert crowd since the pandemic took over our lives – some 12,000 fans in total, all desperate for a break.

“We’re just glad to get out of the house and have a good time, I think, y’know, down here in Alabama!” he told the audience.

Correspondent Susan Spencer said, “Honestly, you could have sung ‘Jingle Bells,’ you know? They would’ve been so excited to see you.”

“I heard rumors that people drove from all over the country to come to a couple of these shows,” he said.

His “drive-in” style shows took place in vast open fields, with fans sitting in, and on, their cars, pickups and SUVs.

“It felt just like a regular show,” Jackson said. “People, I could hear ’em. They were loud and having fun.”

Concertgoers were told to social-distance their vehicles and protect themselves. But it’s not always easy when you’re having fun.

Dr. Dhruv Khullar, a health policy researcher at Weill Cornell Medical College in New York City, told Spencer, “I think we’re gonna see a lot of creativity, a lot of innovation in the way that people are getting their entertainment.”

He said Americans may have to start redefining the meaning of “fun”: “Whenever I think about large gatherings, there’s a few kind of risks that I take into account. The first is, is the gathering gonna be inside or outside? We know that outdoor gatherings are much safer than indoor gatherings are.”

Spencer asked, “Would you feel comfortable today going to a movie?”

“I would not feel comfortable today going to a movie theatre, and I wouldn’t recommend that my patients do that at this time,” Dr. Khullar replied.

“Would you go to an indoor concert?”

“An indoor concert is even more dangerous than a movie theatre. In a concert, you’re usually cheering or yelling or singing along. That means a lot of those droplets, even microscopic droplets, are flying out of your mouth and they’re flying out of the mouth of the person next to you.”

“You’re really being quite a killjoy here!” laughed Spencer.

“I’m the first to tell you I wish there are ways right now that we can flip a switch and for life to go back to normal,” Dr. Khullar said.

“Normal” these days is anything but, and you may as well get used to that mask.

“Most public health officials would say that anytime you have a large gathering, masks should be mandatory – even outside,” Dr. Khullar said.

And how does commissioner Amy Huchthausen of the America East Conference, who has a front-row seat to this new world, see Division I college sports returning? “In a very complicated way.

“It has been difficult, and there’re still no clear answers or direction, candidly, about where we’re gonna end up this fall,” she said.

Big arenas could see big changes – limited seating capacity, staggered entry points, and compulsive cleaning. The only thing off the table is your lunch. “The days of going up and grabbing food and exchanging food probably looks a little bit different as well,” Huchthausen said. “You’re probably not getting a hot dog that’s just sitting on a tray. That hot dog is open for things to fall on it. That minimally will be modified!”

As for the action on the field, Spencer asked, “Can you imagine a world without high-fives, without hugs?”

“Yeah, I find it hard to believe. I’m sort of glad I’m not playing, because I don’t know that I could control myself,” Huchthausen replied.

No spitting in baseball? “How do you control that?” she laughed.

“How do you have baseball? Spencer responded.

But for major league baseball, there will be a shortened 60-game season starting in a few weeks. The NFL is targeting a September kick-off. And the NBA intends to play without fans.

Some events may be without fans, even if fans are allowed.

Spencer asked Huchthausen, “Suppose I came to you and said, ‘Look, I have front-row seats, Madison Square Garden, your favorite performer.’ Are you in?”

Dr. Khullar said, “A lot of this is, how do people feel? Do they feel safe? Do they feel like they’re gonna be able to keep their friends and families healthy if they go out? I think a lot of people will have second thoughts about that, and understandably so.”

Then again, folks seem pretty happy in Southaven, Mississippi, where the annual youth baseball tournament, on hold since March, started up again in May.

Spencer asked Southaven Mayor Darren Musselwhite, “What was the community reaction when you announced, yes, there will be baseball?”

“They were ecstatic,” he said. “The number one thing was public safety. We studied the data. And when we got to the point we felt, like, that it was safe to go back out, that’s when we proceeded forward.”

“I think it goes back to, you know, this is America. Everyone gets to make their own decisions. If you don’t feel safe going, don’t go.”

The hundred or so fans who showed up followed protocol – families together, socially-distanced, with limits on seats and on the number of players in the dugout.

Musselwhite said, “In Mississippi that same week, our governor opened casinos. So just, you know, being a logical person, if it’s safe enough to go into an indoor casino, it’s certainly safe enough to play baseball outside.”

But, as we’ve learned, in a pandemic, circumstances can change in an instant.

Spencer asked, “I suppose individual teams would have to decide what they would do if one of their players is positive?”

“It’s a monumental task,” Huchthausen said. “There’s no way to, you know, paint that picture nicer.”

Dr. Khullar said, “You know, if a player on a team tests positive, the first step I think is to self-isolate the player, and then to test everyone else on the team to make sure that it hasn’t spread to others.”

Yet despite such dire scenarios, Dr. Khullar holds out hope that, one day, our carefree old normal will be the new normal again.

“Look back at, you know, the 1918 Spanish flu pandemic,” he said. “After that, you had the Roaring ’20s. And so, you can envision something like that happening again.”

In Alabama last month, it was easy to envision. Alan Jackson has no more concerts scheduled, but for a couple of nights, it felt a little like good times.

Pop culture nostalgia can help ease the pain of 2020

Cardi B on her ‘nasty’ song and building her music legacy

How Leslie Odom Jr. fought for fair pay for his ‘Hamilton’ movie performance

A Plan to Turn Military Bases Into ‘Sandboxes’ for 5G