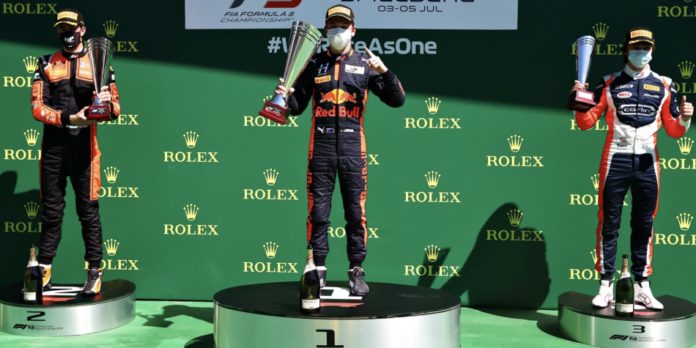 THOUGHTS FROM LAWSON, VERSCHOOR AND NOVALAK

Liam Lawson: Very good. We pushed a lot for this last year and we got close, we got a second and a third, but we couldn’t quite get the win, so it is very nice to win today. It is a reverse grid race though and we want to be starting at the front and winning Race 1s, and that is what we will work towards. I think Quali was our biggest struggle this weekend and it is definitely what we need to work on next weekend. We will be going onto a different compound as well, so that is something that we will have to try and get on top of quickly, because we struggled to turn the tyre on in Quali on Friday, so hopefully we can work on that next week. I am still very, very happy today though. I think that it was a good recovery weekend from where we Qualified and I am looking forward to coming back next week.

FIA Formula 3: Talking more specifically about the race today, you had to fight your way through the field to get to P1, how was it from the car?

Liam: It was good, I had a really good start. I got one overtake into Turn 1 and then I was able to get passed Richard {Verschoor} on the next straight. I think that I used a lot of the tyre up trying to get through to the front, because I knew that if I waited and pushed towards the end, then it wouldn’t have really worked out, because we struggled with the shifts today, so I tried to get there as quickly as I could. That meant that when I got there, I didn’t really have much tyre left, so from about halfway through the race, pretty much as soon as Richard got to second, it was a struggle to keep that gap and to keep him out of DRS. I think that without the safety car, he would have at least got close to me, if not, potentially got around me.

FIA Formula 3: This is your second season in the FIA Formula 3 Championship. You were quickest in pre-season testing in Bahrain and people are looking at you as one of the title contenders. Is that extra pressure for you? Or, have you already put the pressure on yourself?

Liam: Not really to be honest. Certainly, going into the first year, stepping into FIA Formula 3 was a big step from German F4 and I think that there was definitely a bit of pressure there, starting with Red Bull. That was something that I definitely thought about a lot, but, it is something that you get used to. We are fighting for the Championship this year and that is what we are pushing for, but if you think about that stuff too much, then it doesn’t help in any way. For me, it is not too much of an issue. With Hitech this year though, it is an awesome opportunity for me. It is a step up and something that I am looking forward to continuing with throughout the year.

FIA Formula 3: Richard, P2 in today’s race. How was it from the car?

Richard Verschoor: I’m really happy for the team! Since a little before Macau we worked really hard to improve our car. At some point, we just got it right. When we started this weekend, it was not perfect, but we kept on working. And the car is now so much better. The pace is really good; the tyres were lasting. I think without Safety Car, we would have pace to go to the front. I’m just really happy how the team has been working. I’m really sure we will do a good job this year.

FIA Formula 3: We will return to this track next week with new compounds. Will that make a huge difference?

Richard: I guess yes. I mean nobody knows how those tyres are lasting, or how they will be reacting to this track. So I think it will be a little bit of a gamble for everyone. We will have to do what we did this week: start with our base and work from there. We made a few mistakes this week, starting with the wrong set-up on the car and then some clutch issues in Race 1. It was a tough week and I’m pretty sure even though Round 2 will be on another compound, we will still do a pretty good job.

FIA F3: What objectives did you set for yourself for the 2020 season?

Richard: Ah it’s always a hard question. Obviously, after you win in Macau, you always dream big and you want to achieve the most because you have the feeling that you can. But also we have to be realistic. I think we can show this year that we are competing with the best. That’s mainly my target for this year. Everyone is doing a great job this year and I hope I can bring the points home for them.

FIA F3: Clément, P3 today from reverse pole. That’s your first FIA F3 podium. You must be quite pleased with it?

Clément Novalak: yeah, it feels good to be on the podium. We had a pretty tough race, I think the pace was not there. We must have done something wrong with the tyres because all my right hand corners were perfect, but my left hand corners were not. I’ve struggled a lot. So to be honest, the Safety Car must have helped, it was to our advantage today. But I’m extremely proud to be standing on the podium because obviously it is a first for me. I’m already looking ahead to next week. We clearly showed some good pace this weekend. It’s a little shame about qualy but I think if we put it all together we can definitely fight for the top 5 at least. Hopefully we can keep doing that next week and hopefully manage to do something good.

FIA Formula 3: Maybe the pace was not quite there today, but you looked quite feisty on the track. How was it from the car?

Clément: I think I made a couple of strategic mistakes at some point overtaking Richard when he was catching Liam. But generally speaking, obviously it’s my first race weekend, first time with DRS, and a lot of pressure as well because you always put a little more pressure on yourself when it’s your first. In the end, I think we showed some good pace. I’m pretty happy with how the weekend went. We need to keep working, find technical details and where I can improve on my driving as well to make sure that I can nail the lap in qualy.

FIA Formula 3: We will race on the same track next week, but there will be different tyre compounds. How much of a difference do you think it will make?

Clément: It all depends really, because harder compounds may mean less tyre degradation, but I did not feel we had that much already this weekend. The less grip also gives you a little more sliding so there might be more thermal deg. We have to look into it during practice, so hopefully it will be dry this time so that we can see how it affects the long runs. But in general, it’s another challenge and I’m looking forward to it.