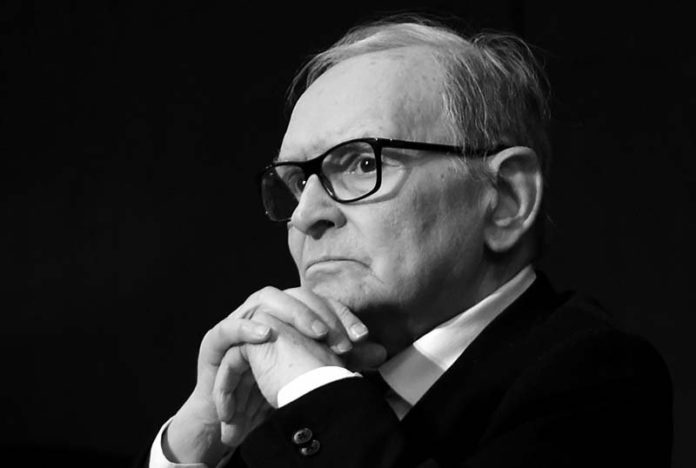 ComingSoon.net is saddened to bring you the news (via The Hollywood Reporter) that Ennio Morricone, two-time Oscar-winning Italian composer whose most notable works include The Good, the Bad & the Ugly and many others, has died at the age of 91 following complications from a fall last week in Rome that resulted in a broken femur.

Morricone had a storied career that spanned nearly 75 years, beginning in his early years as a composer for the theatre and would gradually begin working in the entertainment industry by composing scores for radio, television and pop artists before diving into film in the ’50s. He would get his big break in ’64 when director and former schoolmate Sergio Leone hired him to compose the score for the Clint Eastwood-starring Dollars Trilogy, with his theme for The Good, the Bad and the Ugly striking a chord in audiences’ hearts for years to come, being used in various pop culture in the time since.

After reuniting with Leone in Once Upon a Time in the West in ’68, he would begin to branch out from the western genre into other fields including giallo horror, working multiple times with Dario Argento in the ’70s on films including The Bird with the Crystal Plumage, The Cat o’ Nine Tails and Four Flies on Grey Velvet, as well as Terrence Malick’s romantic period drama Days of Heaven, which would earn him his first Oscar nomination. The ’80s would see Morricone begin working with more American directors including John Carpenter for his sci-fi horror classic The Thing, Brian De Palma for the Oscar-nominated crime thriller The Untouchables and war drama Casualties of War, the former earning him and Oscar and Golden Globe nod and the latter a Globe nod, as well as reuniting with Leone for Once Upon a Time in America and his first collaboration with British director Roland Joffé for the religious period drama The Mission, which earned him his second Oscar nom and first Globe win.

The ’90s would land him one more Oscar nod and on Golden Globe nod and one win for Barry Levinson’s neo-noir crime biopic Bugsy and Italian drama The Legend of 1900, with other notable works including Lorenzo’s Oil, In the Line of Fire, Wolf and Bulworth. The following decade would land him another Globe and Oscar nomination with the romantic dramedy Malèna and his first Oscar win with an Honorary Academy Award. This past decade would see the composer finally earn an Oscar for Best Original Score with Quentin Tarantino’s The Hateful Eight, as well as his third Golden Globe win.

Many of Morricone’s fans and collaborators have taken to social media to express their grief over the loss of the legendary composer, some include:

One of the most emotional moments in cinema history is this final scene from CINEMA PARADISO – a montage of movie kisses celebrating life, love, and the life-affirming magic of the movies. It was scored by the late, great #EnnioMorricone. RIP, Maestro. https://t.co/aQnTV7UqkY pic.twitter.com/ILlQJtTChh

Legends live forever. Our genre is vibrant and colorful because of story telling through music/score like Ennio’s.
Rest in Power Querido Maestro (1928-2020)#enniomorricone #ripmaestro pic.twitter.com/laWV7whXIR

Ennio Morricone. You always know when it’s a Morricone score, even before you see his name. With just a few notes he evokes images of a whole genre. There aren’t any others like him. One of the titans is gone.

Brilliant composer Ennio Morricone has passed away. A friend and collaborator, his talent was inestimable. I will miss him.

Where to even begin with iconic composer Ennio Morricone? He could make an average movie into a must see, a good movie into art, and a great movie into legend. He hasn’t been off my stereo my entire life. What a legacy of work he leaves behind. RIP. https://t.co/qZX6qE10ke