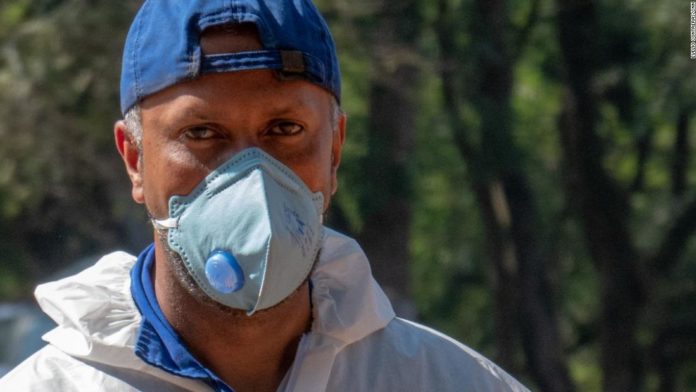 It’s the largest cemetery in Latin America, but since coronavirus came to Brazil, it isn’t big enough.
Families are hustled through funerals, Costa said, each given no more than 10 or 15 minutes to say goodbye so the cemetery can manage up to 80 burials a day at this site on the outskirts of São Paulo.
“That makes us very shocked, very sad, because it is the last greeting they will give to the loved one that they lost and they do not have time,” Costa said.
He spoke on a momentous day for Brazil — a day when the Health Ministry announced more than 45,000 new cases of Covid-19 in the country, one of them the President, Jair Bolsonaro.
Bolsonaro has spent months downplaying the spread of the lethal virus, even as Brazil became the country with the second-most cases — and deaths — behind only the United States.
And while gravedigger Costa is shocked by the rate of death, Bolsonaro told many of his citizens they had nothing to worry about, as he announced he himself had the virus.
“Younger people: take care, but if you are affected by the virus, rest assured that, for you, the possibility of something more serious is close to zero,” the President said.
Bolsonaro acknowledged the risk was higher for those, like himself, over the age of 65. But he told reporters he felt fine, and gave much of the credit to hydroxychloroquine, the malaria drug first pushed controversially by US President Donald Trump then stockpiled by Bolsonaro but unproven as a treatment for Covid-19.
Bolsonaro told CNN Brasil that he took both hydroxychloroquine and azithromycin while he awaited the result of his fourth Covid-19 test in four months.
“I am feeling very well. I believe that the way they administered the hydroxychloroquine on, the effect was immediate,” he said.
Bolsonaro’s touting of hydroxychloroquine worries Dr. Luiz Henrique Mandetta, Brazil’s former health minister.
“So he pretends that this medicine would save 90% of people’s lives. It is not the medicine. It’s just the way the disease goes,” Mandetta said.
“The problem is that people are going to believe that,” he added. “His message could be a disaster in a country that has so many people that really listen more to messages than read about things.”
Mandetta said he and other ministers tried to warn Bolsonaro to take the pandemic seriously and make a national plan to tackle it. But they were not heeded.
“He [Bolsonaro] always said that he would, he was more worried about the damage in the economy than damage to people’s lives,” Mandetta said.
Bolsonaro fired Mandetta for trying to get the nation to wear masks and stay home.
Mandetta says he hopes the President gets well but also hopes he thinks of all the other Brazilians who got a positive Covid test result on the same day as Bolsonaro.
“I just hope that he can think about the other people that have a diagnostic on the same day as he did,” he said. “The people that received the test today are going home, not to the place where he lives with a personal physician 24 hours a day, … plenty of people … and all the equipment.”