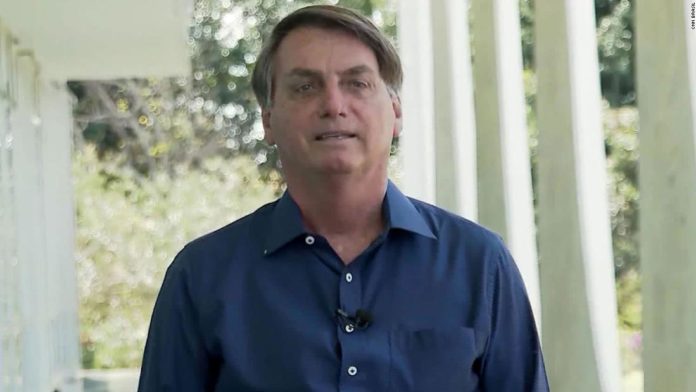 The association, known as ABI, alleged Bolsonaro did not respect the health safety distance from reporters, and took off his mask at Tuesday’s televised press conference in the capital Brasília, where he announced that he had tested positive for Covid-19.
ABI’s statement accuses Bolsonaro of endangering the lives of journalists who were present. “The country cannot watch continued behavior that is beyond irresponsible and constitutes clear crimes against public health, without reacting,” said the association’s president, Paulo Jeronimo de Souza.
Three TV stations — CNN Brasil, TV Record and TV Brasil — were present at the press conference. CNN Brasil reporter Leandro Magalhaes will be tested for the virus Wednesday, and is working from home until he gets his result.
After Tuesday´s press conference, congressman Marcelo Freixo tweeted that he filed a lawsuit against Bolsonaro with the Federal Attorney’s Office. “The president violated Articles 131 and 132 of the Penal Code by removing his mask during the interview in which he announced that he has the coronavirus,” Freixo said.
Bolsonaro’s office did not respond to a request for comment.
In light of Bolsonaro’s diagnosis, ministers who recently had contact with the president have also been tested for Covid-19 over the past two days. Secretary of Government Luiz Eduardo Ramos, Regional Development Minister Rogério Marinho and Chief of Staff Braga Netto tested negative, according to the offices of each minister.
Foreign Minister Ernesto Araújo, Defense Minister General Fernando Azevedo, and General Secretary of Government Jorge Oliveira, were also tested for the virus and are awaiting their results, according to their offices.