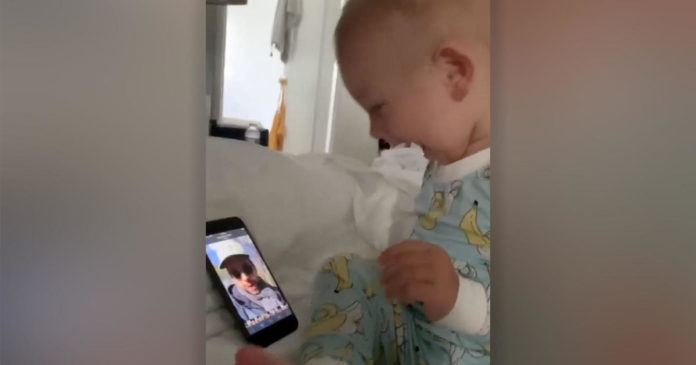 After Broadway star Nick Cordero lost his battle with coronavirus on Sunday, his wife, Amanda Kloots, is sharing a heart-wrenching story about their 1-year-old son, Elvis. Kloots, who often posted about Cordero’s health on Instagram, is still using the platform to update fans.

“So guys, I have to tell you the cutest story,” Kloots said on her Instagram stories on Thursday. “I, of course, didn’t get it on camera — because I didn’t expect this to happen. But I was showing Elvis videos of Nick, and this one video was Nick talking, like leaving a voicemail message for a friend, but he had it saved on his phone. And Elvis saw it and smiled — and I’m not even kidding — leans into the phone to give his dad a kiss.”

Kloots said her son kept kissing the phone screen as she played the video of Cordero. “My heart, of course, just melted,” she continued. “In a way, it made me feel so good because it made me feel like he recognizes Nick, you know, he knows who he is and  he recognizes his dad even though it’s been like over three months.”

Cordero, who was 41, was initially hospitalized on March 30 after developing pneumonia and later tested positive for the coronavirus. The Tony nominee spent more than 90 days in the hospital, suffering several complications including septic shock, strokes and blood clotting complications, which resulted in his right leg being amputated.

On her Instagram stories Thursday, Kloots shared videos of Elvis watching videos of Cordero on a phone, giggling. Elvis has made several appearances on his mom’s Instagram stories, often dancing with her — something she encouraged Cordero’s fans to do in his honor every day at 3 p.m.

On Monday, one day after her husband died, Kloots thanked fans for taking part in the daily Instagram tributes. Then she performed Cordero’s favorite song, “Live Your Life,” one last time, Entertainment Tonight reports.