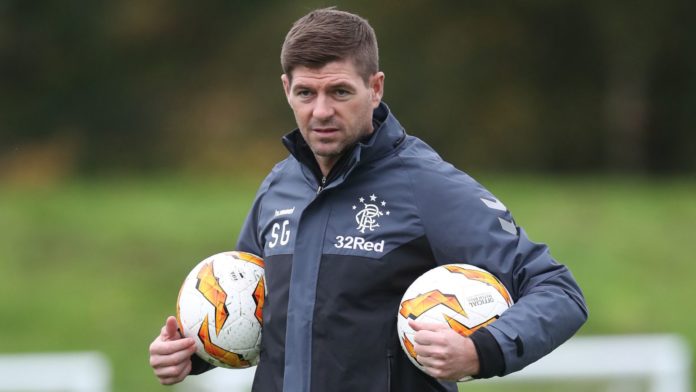 Steven Gerrard was pleased to see his Rangers players blow off the cobwebs with a behind-closed-doors win over Hamilton.

In their first match since the coronavirus crisis brought an early end to the season in March, the Light Blues hosted fellow Ladbrokes Premiership side Accies in a friendly game at the Rangers Training Centre.

Defender Calvin Bassey – the new signing from Leicester – scored in a 2-1 win with Colombia striker Alfredo Morelos netting a late penalty, and everyone in Gerrard’s squad enjoyed some game time apart from Steven Davis, Ryan Jack, Allan McGregor, Filip Helander and Nathan Patterson, who were all nursing minor knocks.

The Gers boss told Rangers TV: “It is a long time not to play football, so the first game back you are always looking at what you got out of it and we got some real valuable minutes into the players’ legs.

“It was a really good workout. I thought Hamilton very professional and made us work for the win.

“But the win is not important, it’s more about getting players through the first game, getting the cobwebs off and getting them a feel for real football, because it doesn’t matter how much you rehearse on the training pitch, until you
get your kits on and see the referee, pre-season gets parked up and its for real.

“I’m pleased with a lot of it but there is still a lot of work to do. I thought we were slow out the blocks, that can be normal. Players are a little bit rusty and the cobwebs are on there.

“We conceded a sloppy goal but we showed character and courage to get back into the game and we should have won it with more goals.”

Gerrard is happy to be back in a more normal pre-season environment following restrictions imposed on the squad through the lockdown.

He said: “The first two weeks were quite frustrating because we had to work in small groups, had to do three and four sessions a day and non-contact. That is not normality.

“But it was nice to see the players, get back into the routine at the training ground and get that step closer back to playing football.

“The last couple of weeks have been better because we have been able to train properly, do a lot of tactical stuff, 11 versus 11, and you can see signs of how we want it to look when it comes to that first game.

“We are a lot more content and happy now, working for real.”