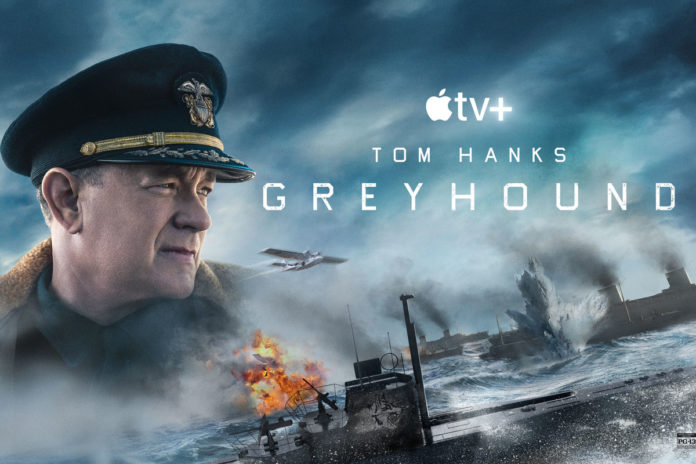 In Greyhound, Tom Hanks plays George Krause, a U.S. naval officer whose first command is in charge of a destroyer escort group in World War II…annnnd your dad is already watching it.

This is only the third non-documentary film to release on Apple TV+, and it is easily the “biggest” release yet. It is a bombastic war film that looks fantastic and definitely feels made for the big screen. Originally a Sony Pictures film intended for theatrical release, Apple bought the distribution rights when Sony killed the cinema release due to COVID-19.

It’s worth watching, especially for World War II buffs; this is Tom Hanks, after all. But the surprisingly short run-time (just over 1 hour 20 minutes until the credits roll) leaves no time for character development.

Make no mistake, Greyhound is an earnest and thrilling ride. The destroyer’s clash with German U-boats is gripping, tense, and seemingly never-ending. You are given no time to catch your breath before the next critical emergency, with urgent orders barking (and repeated), music swelling, and klaxons blaring.

This is ultimately the film’s critical flaw. While the action is intense, it’s very hard to care much about the fate of characters you never come to know. Only Hanks’ Commander Ernest Krause is fleshed out at all, and then not nearly enough.

The film would benefit immensely from an extra 15 minutes. Just a handful of scenes showing downtime between the crew, giving us a chance to know Stephen Graham’s XO Charlie Cole or Rob Morgan’s head chef George Cleveland, would make a world of difference. Every now and then you get a fleeting sense that there is something interesting to explore about these men, but it is never given any screen time.

Is there a slightly longer, more emotionally resonant version of this film on the cutting room floor? Or is Tom Hanks’ script so tightly focused on relentlessly hurtling the audience from one nail-biting emergency to the next that it overlooks the human element?

Greyhound is a good film and a nice feather in the cap for Apple TV+, but it’s not the kind of movie you’re going to fondly recall in two years. You won’t rush out and tell your friends they’ve “gotta see it,” it won’t make any of the year’s best lists. This wouldn’t be a problem for competing streaming services, which have deep back-catalogs of proven hits. Apple TV+, with a slim selection of only new original content, needs a home run, and Greyhound is just a solid double.