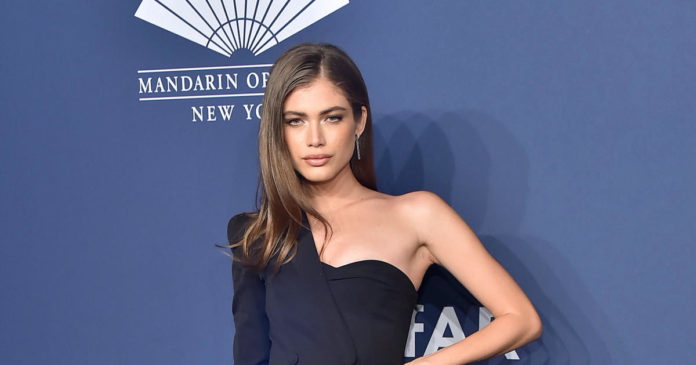 Valentina Sampaio is making history as the first transgender model to appear in Sports Illustrated’s Swimsuit Issue. Sampaio, who was also named a Sports Illustrated Swimsuit rookie on Friday, said in a personal essay she is excited and honored to be part of the iconic issue.

“The team at SI has created yet another groundbreaking issue by bringing together a diverse set of multitalented, beautiful women in a creative and dignified way,” Sampaio, 23, wrote.

Sampaio said she was “born trans in a remote, humble fishing village in northern Brazil.” According to the Trans Murder Monitoring project, 130 trans people were murdered in Brazil last year – more than any other country.

In the personal essay, the model discussed the fear, violence and ridicule trans people face, acknowledging that many don’t have an accepting family, school or work environment. “I recognize that I am one of the fortunate ones, and my intention is to honor that as best I can,” she wrote.

“What unites us as humans is that we all share the common desire to be accepted and loved for who we are,” Sampaio continued. She thanked Sports Illustrated for seeing and respecting her and “for understanding that more than anything, I am human.”

In a question and answer session with the magazine, Sampaio said if she could personally witness any event in history, it would be the Stonewall Riots.

When asked what her most embarrassing moment was, Sampaio said it was being fired from her first professional modeling job just minutes before shooting. “I was told that the client felt it was ‘inappropriate’ for me to represent the brand because my images would be included in a catalog ‘entering into family households,'” she said.

“They made me feel as though it would be seen as immoral and scandalous for me to be a brand ambassador for them,” Sampaio continued. “It was heartbreaking for me on many levels as well as embarrassing because I had excitedly shared the happy news with my university friends and colleagues when the client first confirmed me for the job.”

Sports Illustrated posted several photos from their shoot with Sampaio on Instagram. “I feel strong, and I feel inspired to fight, not just for me but for everyone that I represent,” Sampaio said in a video from the photoshoot.

The annual swimsuit issue will be available on newsstands and online July 21.