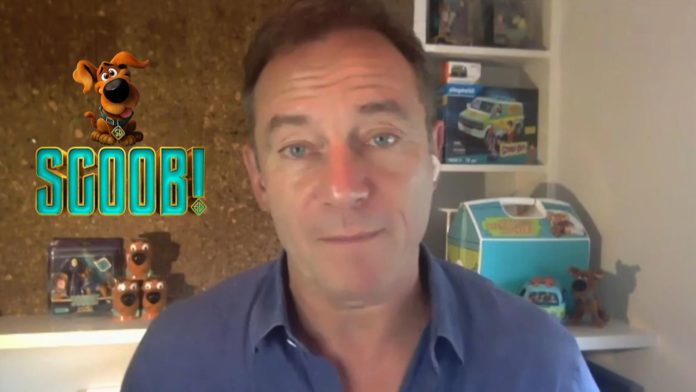 Jason Isaacs is the first to admit that his latest role is a change in direction for him.

He’s joined the starry voice cast of Scoob! for what’s likely to be just the initial animation set in the new Hanna-Barbera universe, which sees classic characters on-screen together for the first time.

And while he may be well known for playing another famous villain – Lucius Malfoy in the Harry Potter films – he acknowledges that the role of Dick Dastardly required a different set of skills.

“There is no such thing as over the top. Over the top is where you start from when you play Dick Dastardly,” Isaacs told Sky News’ Backstage Podcast.

“I spent a lifetime avoiding – and vocally avoiding – moustache-twirling villains.

“And then along he came and I jumped at it.”

A reboot of the classic Scooby-Doo franchise, Scoob! not only explains how Shaggy and his beloved side-kick first met, but also follows them as they try to stop Dick Dastardly from opening the gates to the underworld.

It’s all good fantastical fun, and Isaacs thinks the movie’s strengths lie in its family appeal – something which he values more than ever since the coronavirus outbreak.

“It’s a strange time to be recommending people stay at home and watch a film together, and yet I feel comfortable with it because these are pretty awful times if you can’t find an escape,” he said.

“If you can find anything at all that takes you out of these dark days, and lifts the clouds over your head for an hour or two, you should grab at it with both hands – whether it’s watching Scoob! or anything else, or playing cards, or finding a way to dance or sing… or anything to lift our spirits. Because who knows what the future is bringing?

“Some part of life has to go on as normally as possible, we all [the actor’s family] watched Scoob! together and had a very good time so if I can get other families to do that too, I feel like at least I’ve put something halfway decent in the world instead of fear, which is what I’m feeling a lot of the time.”

The star also said he believes people depend on the arts to help them through tough times.

“We’ve gathered round in groups to tell stories to each other since someone first built a bonfire and probably before then,” Isaacs said.

“And in these difficult times, and we’re not sure who to trust and what a fact is, even… it’s fiction, really, that unites us and that makes us feel less alone.”

Scoob! is available to rent on Premium Video On Demand (PVOD) in the UK now.

Hear more from the interview and a review of the film on this week’s episode of Backstage – Sky News’ entertainment podcast.