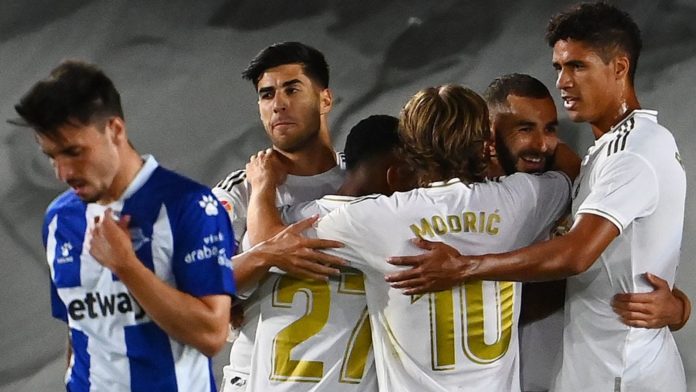 Within minutes, relegation-threatened Alaves were within inches of levelling as former Real Madrid B forward Joselu crashed a header against the bar, while Lucas Perez also missed a glorious chance to equalise created by the lively Oliver Burke.

An offside flag caught the visitors out five minutes after the break when their defence switched off to allow Benzema to stroll through on goal from Rodrygo’s through ball, before squaring for Asensio to slot into an empty net.

After initially disallowing the goal, a VAR review allowed Real to double their lead and cruise to a victory which leaves them five points from securing the La Liga title – they could seal it as soon as Monday if Barcelona fail to beat Real Valladolid on Saturday.

Only five days after appointing their new manager, Alaves threw Juan Ramon Lopez Muniz straight in at the deep end away at the league leaders, and his reign got off to a nightmare start as Navarro’s silly challenge on Mendy allowed Benzema to beat Roberto from the spot with barely 10 minutes on the clock.

But the visitors showed what their new manager would bring to the club within minutes. With Lucas Vazquez deputising at right-back for Real Madrid, Alaves put the raw pace of Burke up against him, but it was Edgar Mendez who first caught him out of position before crossing for Joselu to rattle the woodwork.

Burke continued the visitors’ resurgence by pulling the ball back from the byline for Perez after beating Vazquez for pace, but he blasted over when well-placed.

After the break, the visitors would be made to regret those missed chances, as Rodrygo’s ball through to Benzema caught their defence out, and allowed Asensio to fire in a second with the Alaves defence still absent after reacting slowly to a raised offside flag.

Initially the referee disallowed the goal, but a VAR review overruled him with Benzema clearly at least a foot onside.

From then-on Real took control of the game and could have added to their lead, with Roberto saving well from Benzema and Rodrygo, but their profligacy mattered little as they closed in on the title.