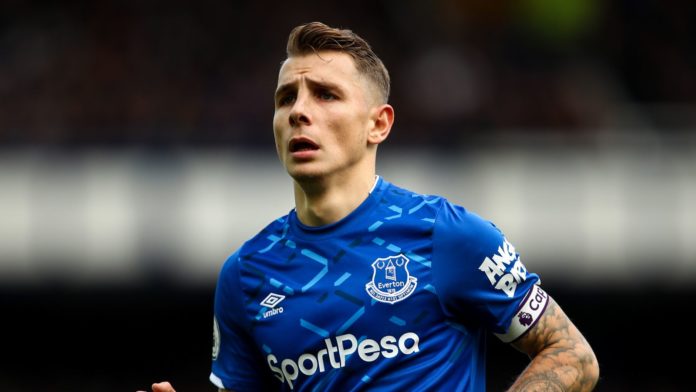 Watch Wolves vs Everton live on Sky Sports Premier League on Sunday from 11.30am; Kick-off at 12pm

In six months, Carlo Ancelotti has brought smiles back to Everton faces already. His arrival gave defender Lucas Digne the wow factor before they had even met and, speaking to Sky Sports ahead of Sunday’s trip to Wolves, he’s already dreaming big.

Even before Ancelotti’s arrival, the club had not had difficulty bringing in impressive managers in recent years – Ronald Koeman, after making waves at Southampton, Roberto Martinez after his against-the-odds FA Cup win with Wigan – but none have managed to bridge the gap to the top four and the Champions League that the club has been seeking for over a decade.

Search the words ‘Everton stability’ and it will soon become clear how often the issue has been cropping up in interviews and analysis across those years, and with good reason.

After 11 seasons of careful building under David Moyes, the Toffees are onto their fifth permanent manager from the following six. After Marco Silva was appointed in 2018, captain Seamus Coleman broke ranks to say the club needed to stop “chopping and changing managers”.

The club has spent near £500m across the last four years, but have finished in a European place only once since, with an array of signings across different eras and styles, from Martinez to Koeman to Sam Allardyce to Silva contributing to an often imbalanced, sometimes bloated squad.

Perhaps that’s why director of football Marcel Brands felt last that December, on the back of Silva’s untimely departure after 19 short months, it was time to go for someone who has been there and done it. Time for some direction. Judging by the results since Ancelotti was appointed on December 21, it was the right call.

Had the season started that day, Everton would be four points off a Champions League spot. When predecessor Silva was sacked 16 days earlier, they were in the bottom three.

Speaking to Sky Sports ahead of facing Wolves on Sky Sports Premier League on Sunday, left-back Digne’s beaming smile when the man he calls “the boss” is mentioned is a good sign of where things are going right.

“When you read his name that he’s officially appointed as Everton manager, you think ‘wow, okay. Something is coming.’ It’s just a pleasure to play for him as a coach,” he said.

“He’s really close to the players. He’s really calm, and I think we need that. It transfers across to the team. When he has something to say, he’ll say it to all the group, and when he’s angry too. I think he has a very good relationship with the group.

“He’s the boss! He won three Champions Leagues, he has a lot of experience. He can give a lot of advice to the players, you can learn a lot from him. I think all the players listen very carefully to what he says. If you learn you can be better, and with him I think we can build something very good.”

Just how good? With the glory days back in Liverpool thanks to Everton’s near neighbours picking up their first top-flight trophy in 30 years this summer, Ancelotti, a man who has won it all, near enough, already has ideas of gatecrashing Jurgen Klopp’s legacy by hotfooting the Premier League trophy barely a mile across the city to Goodison Park.

That might prove a pipe dream in the near term, especially in the financially prudent summer which may lie ahead across the league, but Digne thinks a return to Champions League football, something Everton have only managed once in the last 39 years, is close enough with “the boss” in charge. It’s no surprise, either, the other ingredient he believes will be necessary. You guessed it – stability.

“The next year, or in two years, I think we can fight for it,” he said. “We are a young team, we need a little bit of time, but I think we can do something.

“If you want to do something good, you have to take your time, keep a lot of the same players, you need a good relationship between them, and if you have to buy players, make sure you do that right. I think the club are doing that, taking our time, but building something and in a few years, I think like what Tottenham did, why can’t we do that too?

“We have a lot of young players, with good quality. The club bought a lot a few years ago, the year with me, Richarlison, Andre Gomes, Yerry Mina, and sometimes you need a bit of stability and I think we can do something good.”

Digne certainly has his own sense of stability at Everton. After the defender was linked with a move away to Chelsea or Manchester City this summer, Ancelotti’s response when asked about the ongoing rumours last week could not have been much clearer. “No chance,” he told reporters.

That seems to be something which resonates with the 26-year-old, who was convinced by a “special feeling” to leave Barcelona for Merseyside barely two years ago after a conversation with then-boss Silva and Brands.

“I needed to play, they said I could enjoy life in England because the Premier League will be perfect for me, the high intensity and the challenge, and I was thinking the same,” he said. “After I chose to come to Everton, when I arrived for my first game against Valencia, the welcome was amazing.

“It’s different for the weather, but it’s a football city. You feel the football is everything here. That’s what I want, when you play for Everton, you know you have a lot of fans behind you.

“We know our fans are so important for us when we play at home, for us against the opponent for sure, because they make a lot of noise. Maybe against Southampton we missed them, they push and they push and can intimidate the opponent.

“I feel good. I’m happy, I have a lot of responsibility, I’m happy the coach has given me this responsibility. I’m enjoying since I’ve arrived, I play every game, if we can finish in the Europa League it will be fantastic.”

Digne’s loss would certainly be felt by Everton if he did move on. The Frenchman has created the most chances of any player in the squad this season, 20 more than his nearest challenger, and registered the latest of seven assists this season to rescue a point in Thursday’s underwhelming draw with Southampton.

That is already three more than the four goals he created in his debut season in English football, while also winning the same number of duels with four games left to play – and more than any of his defensive team-mates.

Ancelotti’s influence on Digne has been a demanding one, but one that has him thriving down the left side and any worries about how the long-serving Leighton Baines would be replaced evaporated.

“He’s asked me to be more high, to go back in defence, I have to run a lot! But I love it,” he said. “For me it’s perfect. I can play maybe a little bit more free, and this role is perfect for me.

“The intensity is very different, it’s very high in England, the challenges are very strong, you might see a striker make a challenge which you might not in France.

“I can attack, I have to defend too, I love to defend, to give my best for my team-mates in defence, to make a tackle, and if I can make an assist for sure then I will be happy.”

Whether Ancelotti can succeed where others have failed and bring Everton back to the top of the English game, only time will tell. But he certainly has one believer in his own back line, who even amid speculation over his own future sounds delighted to be there for the ride.

AJ-Fury in Marbella – why was Usyk mentioned?

The BMW driving Brentford towards glory

Raiders to play without fans in new Las Vegas home

Footballers to be shown red card if they deliberately cough at...

Donald Trump demands US gets ‘large percentage’ of any TikTok sale