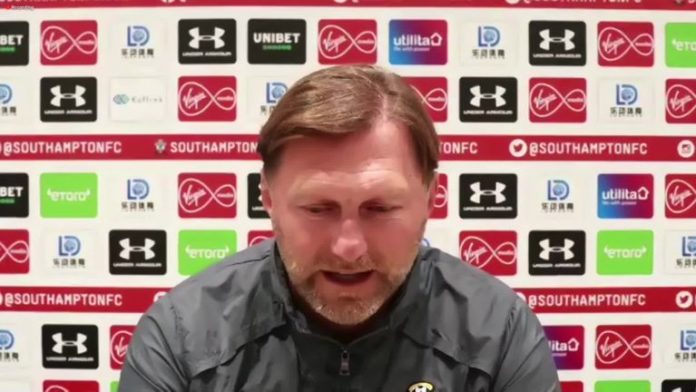 Ralph Hasenhuttl believes a trip to Manchester United is exactly the type of challenge Southampton need for their development.

The Saints travel to Old Trafford on Monday Night Football, live on Sky Sports Premier League and Main Event, to face the in-form side in the Premier League after Ole Gunnar Solskjaer’s team made it four straight wins on Thursday with a 3-0 victory at Aston Villa.

A 1-1 draw at Everton made it three unbeaten for the south coast club, who have moved away from the relegation zone in fine fashion during the second half of the season.

Hasenhuttl said: “They have at the moment an unbelievable run and this is exactly what we like the most because then we can see how good we are and we can go into this challenge and be competitive against such an opponent.

“This is exactly the challenge we need. If we want to get better, we need to challenges against such teams. We can learn a lot.

“I think against Manchester City we learned a lot about how good they are in possession and what they can do – we need these games.

“I once said that if you want to be lion then you have to fight with lions, and I think this is exactly what we are looking for.”

Thursday’s draw at Everton ensured Saints remain in 12th position and Hasenhuttl was disappointed they failed to make it three wins in a row.

He insists that highlighted the next step in Southampton’s progress to battle for spots in the upper echelons of the division.

“In some moments we calmed the game down too much and this is why today we showed the guys how much opportunity we had yesterday to win,” the Austrian added.

“Finally we didn’t take it and this must be the next step in our development, and we score three or four times against such an opponent because they gave us the opportunities to do it.”

Danny Ings netted his 19th league goal of the season at Goodison Park and he is on the verge of becoming only Southampton’s third player to reach the 20-goal mark in the Premier League after Matt Le Tissier and James Beattie.

But Hasenhuttl insisted: “I think it is not that big for him, I think it would be bigger for him if the team comes in the top-10 or even higher if it is possible.

“He is an absolute team player and all the things he does on the pitch are to make the team win.”