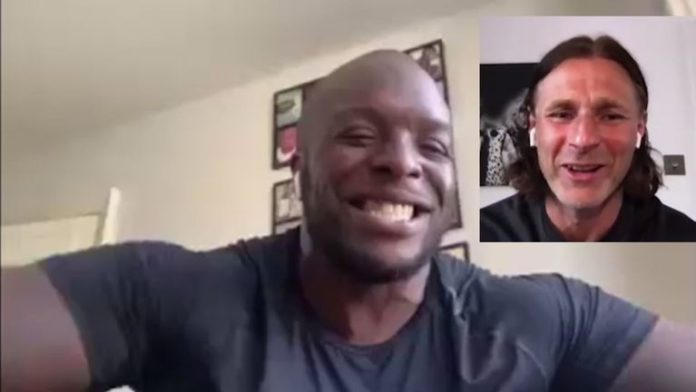 Watch the League One play-off final between Wycombe and Oxford, live on Sky Sports Football from 7pm on Monday; Kick-off is at 7.30pm.

Sky Sports joined Gareth Ainsworth and striker Adebayo Akinfenwa during lockdown, and now with Wycombe set to face Oxford in the League One play-off final on Monday, we take a look back on their chat with David Prutton and Jonathan Oakes, as they discussed ‘generals’ in the dressing room, squad group chats and much, much more!

On the squad group chat…

Akinfenwa: “Sometimes football is a very selfish industry, but I think the reason Wycombe have had success and are being spoken about is because the gaffer concentrates so hard not just on the pitch but off the pitch as well and that is just as important. During lockdown, he called us literally to talk and ask how we were doing, genuinely to ask that question for our wellbeing. We always try and emulate what our gaffer is.

“We’ve got a general Whatsapp group with every single one of us in and then sometimes some people might not want to talk, so we’ll chat in a private group. We’ll put little memes or videos in there every couple of days and it’s just an extension of what we try to do every day on the training ground. It makes you appreciate what players in the squad do.”

Ainsworth: “I can’t take total credit for the idea of sending clips, but I think Pep Guardiola once said he’s a great idea stealer. The idea was to put up a video clip of each player on every day in a random order and instigate some banter or comments and you then see how valuable people are in the squad. I saw Bayo’s two clips the other day and I’ll have a bit more of that – they were superb! We’ll have to get them out there.”

On the dressing room ‘generals’…

Akinfenwa: “The way I look at it, there has to be a hierarchy and I believe that we’ve all got egos and that they are good as long as they are kept in check. I’ve had many managers in my career and I know you have to be so comfortable to be able to ask others to run things and if it ever gets out of hand for them to come and speak to you. The gaffer has got to take credit for assembling a squad full of ability and characters who know how to blend – I just think that’s the hardest thing.

“He gives us the power and the respect as individuals to tell us the standards he expects and for us to uphold them. The beautiful thing is that there are different characters, like myself who is a little louder, Matt Bloomfield, who is the most professional individual, Darius Charles, who is so passionate. It doesn’t matter if you’re 18 or 38, respect comes first and foremost and though players come and go, the ethos has to stay.

Ainsworth: “It goes back a long way to something we did right at the start of my tenure when we took the boys to the Somme. It made me look into the military a little bit more and see how it worked; they have one leader at the top who delegates people to lead everything underneath and very few problems get to him if he puts the right people in charge. What I’ve done at the club is to appoint these ‘generals’ and over the last four or five seasons, it’s been superb.

“Bayo is one of the generals along with Matt Bloomfield, Joe Jacobson, Dominic Gape and they run the dressing room. They uphold my standards, emulate what we are as a football club and, if anyone is out of line, they are told in the right way. It’s so important for new signings who might think they are something special to come in and be part of the group as something special, not on their own. We’re never going to be able to compete for signing the best players because we are always in a fight and even League Two clubs can outbid us sometimes. But what they can’t outbid us at is this togetherness and spirit we’ve got.”

Akinfenwa: “The gaffer gives me the scope to go and do other things, so I try not to let him down because he puts that trust in me. Whoever I’m on the show with is different to me and I like different opinions, I like speaking from a footballer’s point of view rather than from a manager or coach’s point of view. We sit down, watch the game and break it down, plus I’ve never lost on a Saturday when I’ve come in on a Friday!

Ainsworth: “I was a player and I know that that wouldn’t have affected me too much; I think being on the show enhances you as a player and you take that into the next day. It was a case of ‘suck it and see’ right at the start and I’ll be honest that I questioned how it would work but you know trust is huge and that on the Saturday, you have to deliver for me. Now I know that you’ve never lost, you can have him for the rest of the season!”

On hosting a QPR quiz in costume…

Ainsworth: “QPR rung me up during lockdown and asked if I wanted to host a quiz and then a few friends and fans said that Clint Hill had worn a tuxedo when he hosted the quiz the week before and that I had to beat that. I thought that only way I could beat that was to come on screen in full Gene Simmons makeup, which my wife Donna did in just an hour – it was spot on!

Akinfenwa: “Some people would say as a football manager they are meant to be upright, stiff and speak from cue cards and my gaffer came in in full-blown makeup! I couldn’t pull that off! Football is partly to entertain and inspire but it’s also to be an individual and how can you not want to run through walls or play for somebody like that? Don’t ever change, gaffer.”