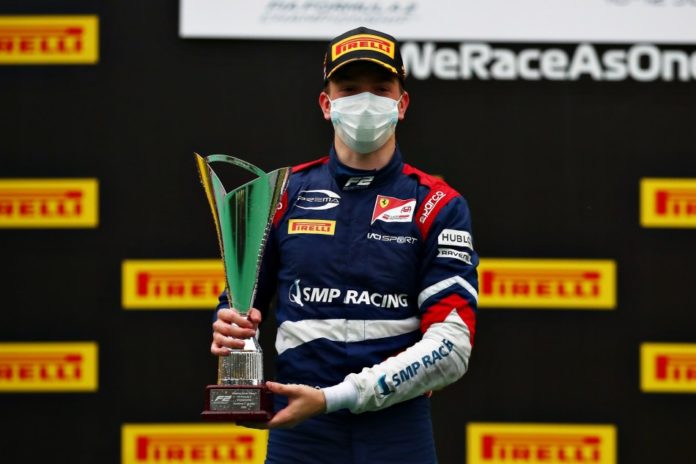 The PREMA racer’s win denied fellow rookie Yuki Tsunoda a first win of his own in F2. The polesitter led for the majority of the race, but an issue with his team radio saw him pit too late, and despite a late charge, he wasn’t able to recover P1, instead, settling for second, and a maiden podium.

Guanyu Zhou was leading the race when Tsunoda pitted late on, but had the opposite issue to the Carlin racer, having changed his tyres too early. Zhou’s rubber wasn’t strong enough to hold off Shwartzman and he ended up in third ahead Mick Schumacher, who had done brilliantly to rise from ninth after a tough Qualifying session.

Marcus Armstrong was another to perform brilliantly around the Red Bull Ring after a tough day on Friday. The ART Grand Prix driver qualified 12th and managed to climb to seventh, just behind his teammate Christian Lundgaard, and Callum Ilott.

Wet weather put the Feature Race into doubt as rain poured down onto the Red Bull Ring. The initial formation laps tested the conditions before race control deemed it unsafe and ordered them back into the pits. This delayed the start by over an hour as they waited for the conditions to ease.

Race Director Silvia Bellot deemed it dry enough for a safety car start shortly after 18:30 local time, and the grid headed out onto the track. The rain eased somewhat, and the safety car returned to the pits after four laps, at which point racing finally got underway. Tsunoda was put under instant pressure from Zhou, but managed to hold the position around the first turn.

The only change to the order on the opening lap saw Jack Aitken edge ahead of Luca Ghiotto for fourth. Tsunoda was attempting to build a gap between himself and Zhou, but despite the drying conditions, was struggling to find the grip, with the Lauda section remaining particularly wet.

Lundgaard was revelling in the rain, finding excellent traction to push ahead of Shwarztman, and then fire past Ghiotto and into fifth. Aitken looked to be within his reach, but a slight wobble gave the Campos driver space to breathe.

Having been passed by Lundgaard, Ghiotto was then under threat from Shwartzman as well, who was remaining patient in his attempts to overtake. He eyed up several moves on the Italian but opted against the risk until lap 15, when he finally lunged ahead at Turn 6. The PREMA racer made the move just in time to follow Lundgaard ahead of Aitken for fourth and fifth.

Zhou and Ilott were amongst the first of the front runners to box on laps 22 and 23, with many of the field looking to stay out longer. The pair returned in sixth and seventh, believing that they could fire through the field and build a gap at the front, when the remainder changed their rubber.

The majority chose to change their boots a few laps later and Carlin told their race leader to follow suit, but Tsunoda remained out, seemingly ignoring team orders. When the same thing happened on the following lap, the team quickly realised that there was a fault with the team radio and dashed to the pitwall, to give him the instructions in person.

This put the Red Bull junior’s race win in doubt. He had lost chunks of time to Zhou and Ilott and returned back in fifth. The select few drivers who had opted to remain out pitted and handed Zhou the lead.

The Chinese driver and his teammate Ilott were under pressure from Shwartzman who had the fresher rubber. The Russian proved too strong and both were passed within the space of a lap.

Returning in fifth with just five laps to go, the win looked to have been lost for Tsunoda, but the Carlin racer was hounding down those ahead of him in a desperate attempt to claw back P1. First, he dispatched of Ilott, and then he eased ahead of Zhou. Shwarztman was 3s ahead of him, and time was swiftly running out, but this wouldn’t stop Tsunoda from trying.

It wasn’t the only late dash going on either. The second PREMA of Schumacher was also on fresher tyres and sprinted into third, with a tidy move on Ilott, before locking in on Zhou.

Back out at the front, Tsunoda managed to get within a second of P1 on the final lap, but he couldn’t quite get within range to make a lunge on Shwarztman, allowing the Russian driver to run over the line for his first win.

Zhou completed the podium behind them in third, just about staving off the threat of Schumacher. Ilott took fifth and Lundgaard sixth, ahead of his teammate Armstrong. Dan Ticktum finished eighth, with Aitken in ninth and Sean Gelael tenth.

“I am super happy to finish first, and I couldn’t have expected that result from the start. The beginning was really tough, and I had some issues with the car after the restart.

“There was a lot of rain coming down on the visor and I couldn’t see much, but slowly the rain started to go away and I started to pick up the pace and get ahead of a few cars. From P4, we done a really great strategy, so a massive thanks to the team, who were really quick on the pit

“We exited behind Zhou and he was really fast, but he started to lose grip and we had an interesting fight. I got passed him and took the provisional leading position, but my engineer told me that Yuki was really quick, so I couldn’t rest or relax.

“I saw him coming and the last give laps were really intense, because I started to lose the rear grip. Thankfully, Yuki was struggling a bit by then too, which saved me.

“I am really happy and really thankful to everyone who was watching and all of my fans. Also, to my team, SMP Racing and the FDA, but the biggest thanks goes to my dad, who was watching me from up there, so I hope that he is happy.”