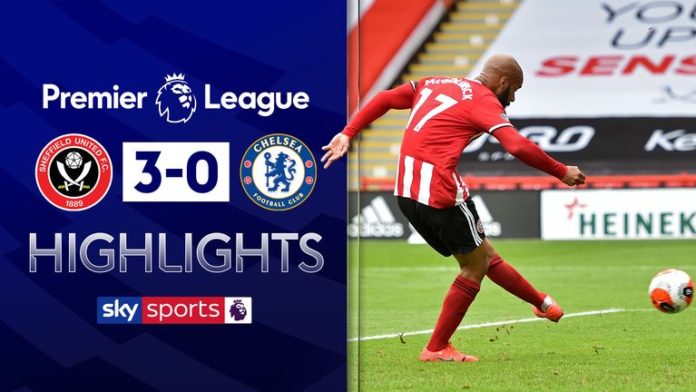 Chelsea have been superb at times since the Premier League restart, beating Manchester City last month and winning four of their first five games, but the 3-2 loss at West Ham was a reminder of their enduring frailties and Saturday’s dismal defeat by Sheffield United was another.

The Blues have already strengthened their attacking options in advance of the summer transfer window, agreeing deals for Hakim Ziyech and Timo Werner, but their error-strewn display at Bramall Lane underlined the need for a defensive overhaul and, even more worryingly, the result might put their hopes of Champions League qualification at risk.

Frank Lampard’s side sit third for now, but by the end of play on Sunday, they could find themselves behind a resurgent Leicester side who are gearing up to face lowly Bournemouth. Then, on Monday night, they could slip further back when an in-form Manchester United play Southampton.

It becomes more of a problem if Manchester City are successful in overturning their Champions League ban. The result of City’s appeal is due to be confirmed at 9.30am on Monday. If they are successful – and Pep Guardiola certainly seems confident – then a fifth-placed finish will not be good enough to clinch Champions League qualification this season.

That could be a problem for Chelsea on the evidence of their performance against Sheffield United, especially with a home game against Liverpool and a difficult trip to Wolves still to come. A Champions League challenge that appeared to be progressing serenely only two weeks ago suddenly seems in danger of petering out.
Nick Wright

City and Sterling hitting form at just the right time

While hopes of lifting the Premier League title were ended a long time ago, Manchester City still hope to add Champions League and FA Cup trophies to the Carabao Cup they won in February.

And they are hitting form at just the right time.

Pep Guardiola’s side have now won their last two Premier League games by five or more goals, the first time this has happened in the Premier League since City themselves did so in three consecutive games in September 2017.

In Raheem Sterling, they also have a player having the best season of his career to date.

“The most important thing to me is the value of these goals, that they add to the team,” he told Sky Sports. “At the end of the day, we’re trying to win the FA Cup final and win the Champions League as well, otherwise these goals don’t really mean anything.”

And in this form, it’s difficult to back against Sterling and City finishing the season on a high.
Oliver Yew

Is Pope now England’s No1?

As well as an impressive point for Burnley, Jay Rodriguez’s equaliser at Anfield ensured his team-mate Nick Pope remains on course to clinch the Premier League’s Golden Glove ahead of Liverpool’s Alisson.

There was no shutout for Pope on Saturday – a stunning Andy Robertson header saw to that – but there was yet another string of superb saves, including fine stops to deny Mohamed Salah and Sadio Mane, which surely must be edging him towards England’s No1 jersey.

That performance at Liverpool came after Pope had made two decisive saves in the midweek win at West Ham and it should be noted that he has had to make 112 saves on his way to the 14 clean sheets which put him top of the Golden Glove standings. Liverpool’s Alisson has been far less busy with 55.

Jordan Pickford has been England manager Gareth Southgate’s preferred choice for some time now but the Everton keeper has looked far less assured than Pope since the restart, while it may be too soon to promote Sheffield United’s standout 23-year-old Dean Henderson to the role. England are next in action in September, so Southgate will be weighing up his options – and two-cap Pope has earned the chance to show he can step up to the international stage.
Peter Smith

This was earmarked as one of two fixtures that would define Watford’s season, with West Ham at the London Stadium taking place after facing Newcastle on Friday, live on Sky Sports.

Ben Foster said he expected a battle, where the performance would be secondary to a result, and so it transpired, with Watford making it back-to-back wins for the first time since January.

There was simply no underplaying the importance of this game, with West Ham pulling clear themselves with a convincing win at Norwich. Nigel Pearson may have told his players the scoreline at Carrow Road during the interval with his side deservedly trailing – but then came a response full of character, led by Deeney.

This wasn’t his greatest game – far from it – but it could possibly prove to be his most important in a Watford shirt. The Hornets have now taken 12 more points in their last 18 games than they achieved in their first 17, which indicates they have a squad that can do far better.

The picture can change quickly in the final flurry of matches, and one win could make all the difference. This victory for the Hornets could well mean curtains for the current bottom three.
Ben Grounds

It has been a wonderful restart for Michail Antonio. He doubled his goal tally in one afternoon and has quadrupled it since coming back from the suspension, scoring against Chelsea and West Ham before Saturday’s showdown at Carrow Road.

It almost felt like Antonio’s four goals against Norwich were an explosion of the promise he has shown in recent weeks. He has always been a huge talent for West Ham and demonstrated it wonderfully this weekend.

All four goals were extremely well taken. His first and fourth goals showed expert placement – slotting home from inside the six-yard box – while the second demonstrated his incredibly physicality. The third was more about beating a shaky Norwich defence, who despite his form, allowed Antonio far too much space and did not mark him well enough.

The win unfortunately relegated Norwich and is likely to have ultimately secured West Ham’s status in the Premier League for another season. Along with Watford’s win against Newcastle, the pair have pulled six points clear of the drop zone, giving Aston Villa and Bournemouth an almost insurmountable challenge.

In his post-match press conference, manager David Moyes said: “Today has been a good day for him and really good that he got the goals in – not many people do score four goals in a Premier League match.”

With Sebastian Haller not fully fit and lacking form, it is Antonio who is stepping up and driving West Ham over the line. Although traditionally thought of as a winger, he is proving he can be just as effective as a centre forward and could be the Hammers’ new focus in that position.
Charlotte Marsh

Norwich’s relegation felt inevitable long before Saturday’s defeat by West Ham. Daniel Farke’s side were only six points adrift of safety when the lockdown came into force. The gap was not insurmountable, but the players seemed resigned to the drop when the season resumed.

Their fate owes a lot to a lack of experience.

Norwich’s squad contains an abundance of young talent in Todd Cantwell, Emi Buendia, Max Aarons, Jamal Lewis and Ben Godfrey. But all five of those players were new to the English top-flight and they were not the only ones. Of Norwich’s older heads, only Tim Krul and Alexander Tettey had any meaningful Premier League experience behind them.

The lack of knowhow was particularly apparent in defence. Norwich’s most-used back four – Aarons, Christophe Zimmermann, Godfrey and Lewis – had an average age of under 23, making it the youngest in the division this season. It is little wonder they were so often overwhelmed by more streetwise opponents, West Ham being just the latest.

Norwich were operating on a budget far smaller than those of their rivals, of course. Their emphasis on youth was a commendable approach. But the sharp end of the Premier League can be an unforgiving place for new arrivals. Norwich found that out the hard way.
Nick Wright