Home Culture Trevor Noah on responding to these times without laughs 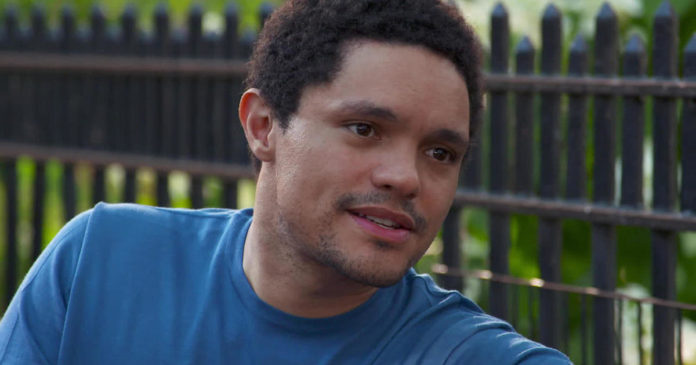 Like a lot of us, it’s been a while since Trevor Noah’s had a day at the office. And he has “literally no clue” when he’ll be back in.

Just about four months ago, the 36-year-old host of Comedy Central’s “Daily Show” (a ViacomCBS property) said goodbye to his studio audience, and started life in the work-from-home world, with “The Daily Social Distancing Show.”

Correspondent Jim Axelrod asked, “How much can you replicate the energy of a writers’ room when it’s a Zoom room?”

“You know, the first few weeks, you’re stumbling over who’s speaking, who’s not speaking, somebody forgot to unmute themselves, they said a whole soliloquy and you couldn’t hear it,” Noah replied. “But then, once we were beyond that, it’s become the new normal, and we settled in.

“And so, what I said to the team was, “Let’s use this opportunity to create something different.'”

“Something different” is exactly what Noah posted at the end of May:

“You know, what’s really interesting about what’s happening in America right now, is that a lot of people don’t seem to realize how dominoes connect, how one piece knocks another piece that knocks another piece, and in the end creates a giant wave. Each story seems completely unrelated, and yet at the same time, I feel like everything that happens in the world connects to something else in some way, shape or form.”

“I’m watching what’s happening, I see the Christian Cooper video in Central Park where Amy Cooper threatens 911 on him, and on that same day, start seeing the videos, you know, about George Floyd. And then, that week, later on, you start seeing the rioting, you start seeing the protesting in Minneapolis. And I’m sitting there, genuinely saying to myself, ‘How do we, as people, not see that everything affects something else?'”

In a stripped-down model of lockdown content, Noah looked directly into his phone and spoke from deep in his soul for 18 minutes – not chasing laughs, but chasing light:

“George Floyd and the Dominos of Racial Injustice” has been viewed more than 9 million times on YouTube alone.

Born and raised in South Africa under the apartheid system of racial segregation, Noah is uniquely suited among the late-night hosts to offer perspective not just on what is unfolding in America, but why.

“This is all a wheelhouse moment for you,” said Axelrod.

“Yes, I think America is that as a society. But I don’t think that’s true. That’s something that people need to acknowledge in American politics. If you only have two choices, people are always gonna make one of two choices, which means people are automatically always going to be against each other.”

In a country consumed by, and often divided by, black and white, Noah thinks we’d be a lot better off somewhere in-between.

“I think nuance doesn’t sell as well in America,” he said. “Nuance means you can’t just take a stand and fight the other person. Nuance means we have to talk a little bit more. And until the American political system can find a way to represent the nuance that exists within America, you are going to create this false impression that there is this or that. There is only racism or not racism. It’s like, no. No, no, no, no, no.”

“Because life is gray? Life is not black and white?”

Axelrod said, “This is the deepest stuff a society could be engaged in. How do find the funny in it?”

“Sometimes I don’t find the funny in it,” Noah replied. “I use the funny to deal with this, you know?”

“To process the pain, the despair?”

But it’s not just his home country’s reckoning with racial injustice that gives him sharp insight. Eleven years ago, Noah’s mother was attacked by his stepfather.

“My mother was shot in the head, and I thought she was gonna die. And I’ll never forget, she’s looking at me from the hospital bed. And she’s says to me, ‘Trevor, don’t cry.’ I said, ‘No, mama, I’m gonna cry. You were shot in the head.’ She said, ‘No, no, no. Look on the bright side.’ I said, ‘What bright side?’ And she said, ‘At least now, because of my nose, you’re officially the best-looking person in the family!’

Noah’s success has been rocket-fueled by his mix of humor – observation, criticism and commentary. If meeting the moment requires tinkering with his formula, that’s just fine with him.

“I’m not afraid to make shows that have no laughs,” he said. “I’m not afraid to make serious shows that speak to the issues and communicate honestly what I’m feeling, and what society may be experiencing. We’ve made some shows at ‘The Daily Show’ that literally have no jokes. There are some days I’ve come into the office and said to my team, “Hey, guys, there is nothing funny for people. This is not even a moment to try and find the funny.'”

Meaning, these days Trevor Noah is doing business a little bit differently – still provocative, less concerned about humor than he is about our humanity.

Of Noah’s “Dominos” video, Axelrod said, “This was among the most moving and compelling pieces of content you’ve put out there, and there’s not a laugh in it. That’s fine?”

“There’s not always gonna be a laugh,” Noah said.