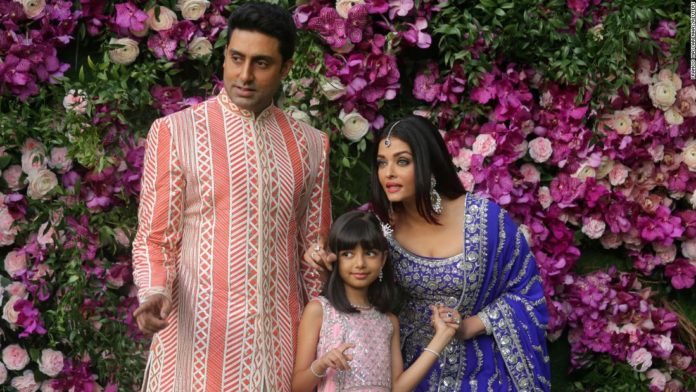 Rai Bachchan, once dubbed “The Most Beautiful Woman in the World” and winner of the 1994 Miss World pageant, married into Bollywood’s most famous family with her nuptials to fellow actor Abhishek Bachchan in 2007.
He announced via his verified Twitter account on Sunday that his wife and their eight-year-old daughter have coronavirus.
“Aishwarya and Aaradhya have also tested COVID-19 positive. They will be self quarantining at home,” Abhishek Bachchan tweeted. “The BMC has been updated of their situation and are doing the needful. The rest of the family including my Mother have tested negative. Thank you all for your wishes and prayers.”
Abhishek Bachchan had earlier announced that he and and his legendary actor father Amitabh Bachchan had tested positive and been taken to the hospital.
On Sunday the younger Bachchan tweeted about their status along with a message for his more than 15 million Twitter followers.
“My father and I remain in hospital till the doctors decide otherwise,” he wrote. “Everyone please remain cautious and safe. Please follow all rules!”
Bachchan and Rai Bachchan are among Bollywood’s most famous couples and have been referred to as the “Brad Pitt and Angelina Jolie” of India back when the latter were still a Hollywood couple.
But Rai Bachchan was a mega star long before her marriage.
She had multiple Bollywood hit movies and was the holder of the title of the number one box office star in the world while also earning millions of dollars in endorsements for major companies including L’Oréal, Coca-Cola and De Beers diamonds.
Time magazine named her one of the most influential people in the world in 2004.
In America, she is best known for starring in the 2004 film “Bride And Prejudice” as well as the 2005 film “Mistress Of Spices.”
Rai Bachchan also starred opposite Steve Martin in the 2009 action comedy “The Pink Panther 2”
Her wedding to Bachchan in 2007 was one of the biggest events of the year and it was international news when she gave birth to their daughter in 2011.
Rai Bachchan was also a popular guest on the “The Oprah Winfrey Show,” having first appeared in 2005 and then again with her husband in 2009.