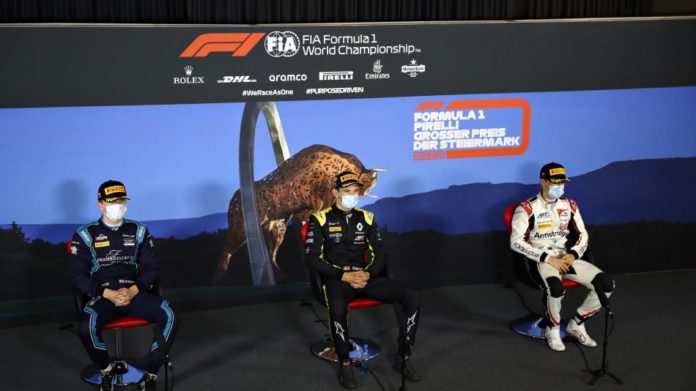 FIA Formula 2: Hello and welcome to the press conference with the top three finishers in today’s FIA Formula 2 Sprint Race at the second weekend here in Austria. We are joined by race winner Christian Lundgaard for ART Grand Prix, in second place is Dan Ticktum for DAMS, and third is Marcus Armstrong also for ART Grand Prix. Christian, you started from third place, but you wasted no time in getting into the lead today. Was that crucial in securing this win?

Christian Lundgaard: I think in the end, yes. Making the gap to Dan was important to break the DRS. After that I just tried to keep my pace. From my point of view the pace was very consistent. I was told by my engineer that he was catching up a bit, so then I pulled away a bit and just tried to keep the gap throughout the whole race really, and in the end just stay on track.

FIA Formula 2: It’s your first win in Formula 2. Do you think that last weekend, and the fact that you were able to experience racing here in these cars, helped today?

Christian: Absolutely. Missing three days of testing doesn’t help! Last weekend was a learning process for me. The pace was there at the beginning, but I didn’t really push enough in the races. Especially in the first laps. I learnt from that for this weekend. I think you could see today that I was a bit more aggressive in the beginning. That helped to secure the win today.

FIA Formula 2: Congratulations, well done today. Dan, moving on to you. Back again. This time one place better off than last Sunday, but I know you’re not completely happy. It looked like hopes of the win were resting on those first few laps. Just talk us through it.

Dan Ticktum: Yes, you’re right. I’m not entirely happy, but when you start from pole and you go backwards, you’re only going to be unhappy. You have it all to lose. I got a good start and managed to defend well in the first lap. That box was definitely ticked. I still had a pretty good gap after the VSC, so I can’t really put any blame on that. I just didn’t have the pace in the first five laps. I was really trying to warm the tyres in the VSC and the warm-up laps, and the brakes, trying to be as aggressive as possible. In the past, like last week, it was a similar thing really. For the whole two weeks. We just haven’t been strong at the start of the race, or after safety cars. It’s a little bit to do with my management, but this time I couldn’t have put any more energy in the tyres. I feel like I did the best I could. Once Christian disappeared off into the distance, by about three or four seconds, something like that, my pace started to get a better. But, by that point he’s well out of the DRS and I was literally on the limit every lap. I made one mistake. I think I was half a second off all the other laps that I did. In terms of my performance I don’t think we could have extracted much more from what we had. It was a pretty weak weekend in terms of pace for us I would say. We were a bit stronger with the other compounds last week. The positive thing is that I finished 15th in Qualifying. I finished P8 yesterday in the wet, which was a good job from all the team with the strategy and enabled me to get some decent points today. Like I said though, I’m not first, so I’m not happy.

FIA Formula 2: Well if you want some positives, that’s four straight top eights to start the season, and two podiums as well…

Dan: Thank you very much, that helps.

FIA Formula 2: Are you happy with the consistency?

Dan: Of course, yeah. Every race I’ve been in the points, so yeah. Like I said, if you took my qualifying, I would have taken the two results that I have had. We need to do some work this week to try and find some pace at the beginning of the race and in Qualifying. Although Hungary is a different track, it’s not a million miles away from how the car behaves here. We’ve got a bit of work to do.

FIA Formula 2: Well done today. Marcus, moving on to you. I’m almost nervous to ask now seeing as second place is so unhappy with that… You didn’t seem to quite have the pace of the top two today. Why was that?

Marcus Armstrong: It was a bit of a strange one to be honest. I think we were sort of the opposite of Dan. We definitely had the pace at the beginning, but there was one point where I just completely lost the rear axle. I was more or less surviving for the last 15 laps. I certainly wasn’t able to drive the way that I wanted to, so I was massively limited by that. Positively, we do have more points on the board, and that’s the priority at the moment. I keep thinking of this weekend as the first weekend, but it’s the second weekend! But still, the Championship is long, and I think that we’re in a good position because I feel that we’re only going to improve. Then again, I think that today was just a bit poor in terms of performance. We need to do some work.

FIA Formula 2: Three rookies in top three, and all three of you are well placed in the early standings. Does this feel like a season where the championship could go the way of a rookie?

Marcus: Absolutely. I think this year, if any year, a rookie is going to win the championship. Firstly, there’s whole bunch of good rookies. I’ve raced against both of these guys in the past and in many Formulas. Robert Shwartzman is also very strong, Felipe Drugovich too, so I think there’s a lot of strength there. With the new 18-inch tyres everyone is also having to learn. For example, in that race I think Guanyu Zhou had similar issues to me in terms of tyre management. Even the experienced guys are still having to learn this new rubber. To answer your question, yes, I do think that a rookie is well placed to become the champion this year.

FIA Formula 2: Thank you very much. Christian, just returning to you on a similar theme really. You’ve had a very consistent start to the season, so are you happy with the way that’s gone?

Christian: Absolutely. To be honest I would say that it’s better than expected. Last week I came into the first practice session not knowing where I was going to be. Considering that I’ve been in the points in all four races, and quite well placed, I am quite happy. I fully agree with Marcus. This is the year. No one knows about the tyres. This was the first weekend that we used the supersofts and the mediums. It’s a new thing for everybody. This is the year.