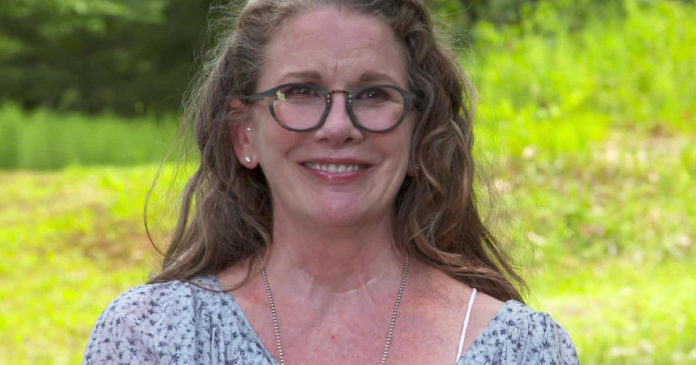 “This is our ‘Little House in the Catskills,’ I guess you could call it,” she said, showing off her garden. “What’s really exciting for me is that nothing has died!”

It’s a setting that suits Gilbert well. After all, we first met her gamboling through the great outdoors as Laura Ingalls on “Little House on the Prairie,” based on the beloved series of books, and one of the most-watched TV shows of the 1970s and early ’80s.

“It was like a really great summer camp,” Gilbert said, “but I also got to play the ultimate game of dress up, and be in those fantastic clothes, and the button-up boots. I don’t remember it ever not being fun.”

“Little House” is still in reruns; in fact, its popularity has recently been spiking.

Rocca asked, “Why are people watching the show now?”

“Oh, my gosh, with everything that’s going on in the world right now, I think, from what I’m hearing from people, is that ‘Little House on the Prairie’ is a reminder of when things were simpler for us in our lives, those 45 years ago.”

When the show debuted in 1974, the country was in the midst of an oil crisis, a recession, and the Watergate scandal.

“‘Little House on the Prairie,’ then, provided people with the reminder of what we went through when we started this country, and how difficult that was,” said Gilbert. “And I think we’re at that place again. If we could have done what we did in the 1800s, in the 1970s, we can do this. The keys are gonna be compassion, community, faith (whatever that faith looks like), love – that’s it. That’s all that matters.”

Some of the episodes seem to have been produced with a vision of 2020, such as the first season episode “Plague,” with rats! “Oy!” said Gilbert.

And another episode about a quarantine, and one about race, with actor Todd Bridges playing a child of former slaves who comes through Walnut Grove and is taken in by the Ingalls family. “Would you rather be a Black man and live to be 100, or White and live to be 50?” he asked Charles Ingalls, played by Michael Landon.

“The question itself is intense enough,” said Gilbert, “but Michael Landon’s reaction, he has no answer. And that’s where we are.”

Just nine years old when she was cast, Gilbert starred opposite Landon who was already famous from his days on “Bonanza.” Landon didn’t just play Laura’s Pa; he kind of was the show’s Pa, writing and directing episodes, and executive producing the series.

Rocca said, “You were just a kid with a lot of lines to learn.”

“I had a lot of words,” Gilbert said. “But more than just a lot of words. I did a lot of running. I don’t think I ever walked anywhere on that show, even as a young adult! I never walked. I ran everywhere.”

“And did you always know all of your lines cold?”

“Only one time did I not know my lines. And it only happened once. And I kept forgetting and I kept forgetting. And Michael finally cut and he said, ‘You don’t know your lines, do you?’ And I just started crying. So, he cleared the set. He made everybody go away.”

“You just burst into tears?”

She was adopted, a day after her birth, by actors Barbara Crane and Paul Gilbert. When Melissa was 11, she was told her father died of a stroke. “I was 45 when I found out that my father had taken his own life. Yeah, that was a very deeply-hidden secret from pretty much everybody in my life.”

Rocca asked, “Do you think it was a good thing that it was hidden from you?”

“You know what? I think it’s my thing that it was hidden from me,” Gilbert replied. “It’s not my thing, like my fault. That’s what I’ve been dealt. Would I do something like that with my kids? No. But, because I know how damaging those kind of secrets can be. You know that expression, ‘You’re only as sick as your secrets,’ is absolutely true.”

Melissa Gilbert is 56 now, a mother and grandmother, and married to actor Timothy Busfield. She’s the woman she is today, she said, because of her upbringing in “Little House”‘s Walnut Grove.

“I absorbed so much without even realizing what I was learning – really important life lessons about family, community, tolerance,” she said. “Because I was saying all of these things, and having to understand all of these things, they became a part of what I learned as well.”

“The show’s values, where did they come from?” Rocca asked.

“The show’s values, I think, were absolutely a reflection of the values of our leader, of Michael Landon,” Gilbert said. “He was that man. He believed that people are always really good at heart. And that anyone is redeemable, and that the only way to change things is to do it from a place of love and fairness and understanding. It’s unfortunate, for so many reasons, that he passed away when he did, because I think his voice would’ve been an incredibly important voice to have today.”

Michael Landon was just 54 when he died from cancer in 1991. The show he helped bring to television has never been off the air.

Rocca asked, “What do you think Michael Landon would think if he knew that people were still embracing the show?”

“Oh, I think Michael Landon would be proud and thrilled,” Gilbert replied. “I think that he would be here talking to you instead of me. And I’d gladly yield the chair.”