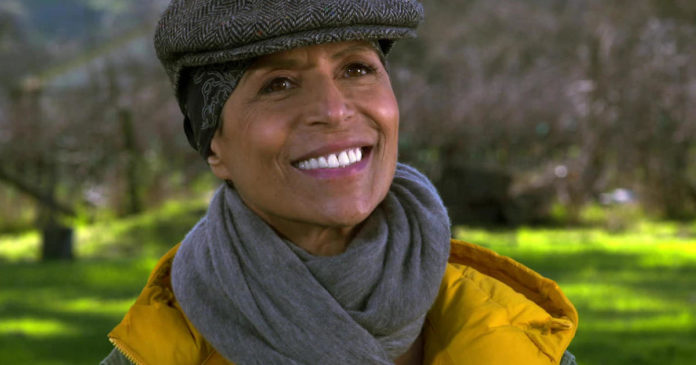 “The calmness of this place is like, okay, let’s bring that back to the craziness of the kitchen and being calm,” she said.

“And I can taste that?” asked Whitaker.

The farm was sprouting to life in the California sun. The early spring seemed to renew the land – and Crenn, who, at the time, was busy overseeing her growing enterprise: two restaurants, a bar, and a soon-to-open bakery. Then the coronavirus hit.

“The industry is kaput, it’s done,” she said.

“Yeah, it’s not going to be the same. Every day I see five, six, seven restaurants that will never reopen.”

One of the world’s leading chefs, Crenn was pained by how the virus afflicted the restaurant industry.  When Californians were ordered to shelter in place in March, Crenn had to lay off 50 staffers.

She said, “A restaurant, a small business lives day-by-day. If they’re lucky they can make maybe up to 5% profit. That’s not a lot.”

Atelier Crenn, her three-star centerpiece known for its dazzling interpretations of French food, began providing meals for frontline workers, and selling dinners through the front windows.

“Yeah, a really cool one!” she replied.

Dinner service on a Friday night at Atelier Crenn before the virus was a well-orchestrated symphony of food in motion. In the kitchen, chef Jean Christophe Bourgignon worked with maestro Crenn to design each course. He tasted each before serving it. Some nights they served 15 courses a sitting – each plate a piece of art, with an eclectic mix of ingredients to delight the palate, like their tartare of spiny lobster.

Dominique Crenn never went to culinary school, but food is her passion.

After arriving in California from France in 1988, she worked her way through kitchens in San Francisco and Los Angeles, and in 2011 she opened Atelier Crenn.

Her artistry catapulted her to the forefront of America’s chefs. The Netflix show “Chef’s Table” and a James Beard Award raised her profile. Earning three Michelin stars has given Crenn a platform to influence the way we relate to food.

She recently cut meat from the menu, but that hasn’t cut her customers … or her accolades.

“Right! How amazing is that? We must done something good,” Crenn said.

“First woman in the United States to get three stars. You were also the first woman to get two Michelin stars.”

“Yeah, it’s interesting to be the first. When you say ‘first female chef,’ it’s weird, right?”

“At one point, you were called the world’s best female chef. Why do you roll your eyes? Why do you bristle at that?”

“Sort of diminished in some way?”

“Yeah, diminished,” Crenn said. “Not considering us as being the ‘best chef.’ But you considering us as, ‘Well, let’s take the women just on their own and let’s pick someone that will get the award.'”

Actress Maria Bello, of CBS’ “NCIS,” said of Crenn, “She knows what her authentic self and vision is, and how to make that a reality in the world. And I admire that. She doesn’t listen to anyone else’s rules.”

Chef Crenn listened to her heart and got engaged to Bello in December. Crenn’s new memoir is dedicated to Bello.

Whitaker asked, “In her memoir’s dedication, Dominique calls you the love of her life. What does that mean to you?”

“It’s nice to believe in fairy tales, right?” Bello replied. “She and I, we just lit each other up from the first minute we met each other, and it felt so familiar and comfortable.”

“Love of my life!” said Crenn.

“You know, the depths and layers of Dom’s food? That’s who she is in life, too, the way that she builds layers of flavors. I feel that you build layers of love.”

Buoyed by the love of her life and her love of food, Crenn was on top of the world. But last year her world was shaken like a California earthquake when she learned she had breast cancer.

Crenn said, “I remember, I asked my doctor, “I’m in trouble?’ And he say, ‘No. But you gotta do the work.’ And I’m like, ‘Okay.’ And then you start to peel the layer of who you are and start to look at yourself in the mirror. And you, like, start to learn so much about who you are.”

“A lot of humility.”

Her health today, she said, is “amazing. I’m good. My hair’s coming back. My eyelashes. Cancer-free. But I’m good. I’m stronger than ever.”

With in-door dining in California on hold, Crenn says she’s eager to open her restaurant again, with modifications like partitions between the seating.

“People are going to need to feel safe,” she said. “Like Atelier Crenn, you know, I’m going to redesign it as a new experience.”

Dominique Crenn calls herself a warrior. She survived cancer, and she has no doubt her restaurants will survive the coronavirus.