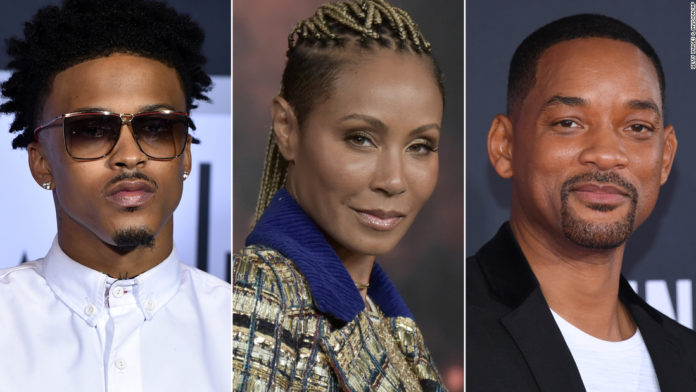 Pinkett Smith and her husband of 23 years, actor Will Smith, confirmed during Friday’s episode of her Facebook talk show “Red Table Talk” that she had been romantically involved with Alsina years ago.
The superstar couple said the relationship began during a period they had separated.
“I got into an entanglement with August,” Pinkett Smith said during the talk.
In a recent interview with radio host Angela Yee, Alsina said he had been involved romantically with Pinkett Smith. Pinkett Smith has been married to Smith since 1997 and shares two children with him.
“I actually sat down with Will and had a conversation,” Alsina said during his interview with Yee. “Due to the transformation from their marriage to (a) life partnership that they have spoken on several times, and not involving romanticism, he gave me his blessing.”
Pinkett Smith said during her “Red Table Talk” that she began a friendship with Alsina four and a half years ago which developed into something more after she and Smith hit a rough patch in their relationship and agreed to amicably split.
But she denied that her husband had given Alsina permission to be involved with her, though she added that she understood why the young singer may have believed that to be the case.
“The only person that can give permission in that particular circumstance is myself,” she said. “I could actually see how he would perceive it as permission because we were separated amicably and I think he also wanted to make it clear that he’s also not a homewrecker. Which he’s not.”
She said the relationship ended, she and Smith reconciled and they are now at a place of “unconditional love.”
The whole drama set social media afire and soon there were plenty of memes and conversation about the “entanglement.”
On Friday Alsina responded on Twitter after actress Keke Palmer tweeted to set the record straight about whether they had been romantically involved.
Palmer denied they were when a follower shared a picture of Palmer and Alsina together and inquired about it.
After sharing his thoughts about that (and confirming that he and Palmer had not been a couple), Alsina tweeted what some took to be his frustration resulting from all the attention and hoopla.
“Imagine not knowing how to mind the business that pay you,” he tweeted. “I catch all the subliminals. (Not just about today) & you can call me whatever you like, Mess is constantly inserting yourself in topics you have nun to do w/. Go play w/ ya MAMMY! Not me!”
He went on to add “If you have something to say, say it w/ ya CHEST kids.”
“It’s always very perplexing cause I real deal be showing people genuine love,” he tweeted. “Whole time that envy eating ya lil heart. Anyway, NEXT!!”
Alsina has not shied away from the drama.
A week before Pinkett Smith and her husband broke their silence, Alsina appeared to double down on his claim about the relationship in a lengthy Instagram post in which he wrote about a variety of topics.
In part he wrote “A tower of truth can never fall, only a tower of lies can do that.”
“My truth is MY truth, & its mine to own,” he wrote. “There is no right or wrong here, it simply just IS. & I make room and have acceptance for your thoughts and opinions, regardless if I agree or not, you have that freedom to feel WHATEVER it is u feel because when you’re at TRUE peace, all of the noise and chatter becomes that of a whisper.”
CNN has reached out to reps for Alsina for additional comment.