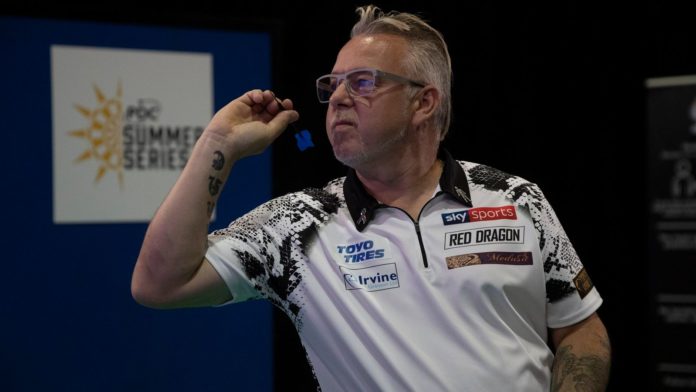 Wright was too strong for world no 3 Gerwyn Price in Sunday’s final, winning 8-2 and averaging almost 100 to sink The Iceman in a a repeat of their World Championship semi-final at Alexandra Palace in December.

The title was also enough for Wright to top the Order of Merit by just £500 from Michael van Gerwen as the sport completed an impressive and trouble-free return over five days in Milton Keynes following a three-month hiatus due to the coronavirus pandemic.

Snakebite enjoyed a brilliantly consistent week, reaching the final in Wednesday’s return to action where he was beaten by world no 1 Van Gerwen, and following up with a couple of quarter-finals and a run to the last 16 on Saturday before his Sunday success.

“I’m pleased to win and it’s great for me,” said Wright. “It could have been two wins, but I wanted to be top of the Summer Series Order of Merit and I knew I had to win today, so I’ve done that.

“It’s ideal preparation for the World Matchplay and it’s good to be back playing.”

Van Gerwen won the title on Wednesday and Friday but suffered another early defeat, this time falling to Devon Petersen in the second round, the third time he failed to get beyond the last 16 over the five days.

Attention now turns to the sport’s second biggest event, and first televised action since it’s return – the World Matchplay. For the first time in it’s history the prestigious tournament will be held away from Balckpool’s Winter Gardens will also be held

Wright defeated Jelle Klaasen, Darren Webster, Brendan Dolan, Nathan Aspinall on his way to the semi-finals, and averaged 109 in seeing off Wayne Jones who reached his first ranking semi-final in seven years

The Iceman was in spectacular form to enjoy his best run of the five days and averaging more than 100 in wins over William O’Connor, Darius Labanauskas, Jose De Sousa, James Wade and Devon Petersen.

In the final, Snakebite raced into a 5-1 lead with four legs on the spin after the opening two had been shared. Price stopped the rot with the seventh but Wright claimed the next three for the title and £10,00 first prize.

In the race for the places at the World Matchplay, Devon Petersen needed to win Sunday’s event to make it to Milton Keynes for his debut in the tournament.

His defeat meant Ricky Evans took the 16th spot from the 12 month Order of Merit. Dimitri Van den Bergh will also make his debut in the year’s second biggest tournament. Steve Beaton will make his 20th consecutive appearance after hanging on to a place in the field, but Mervyn King’s 13-year run is over after a disappointing week saw him fail to make up any ground.

Darts is back on Sky Sports in July, with nine days of coverage from the World Matchplay getting underway on Saturday, July 18, and every day until the final on Sunday, July 26.