Home Sport Arteta: The game was ours | Jose targets Europa 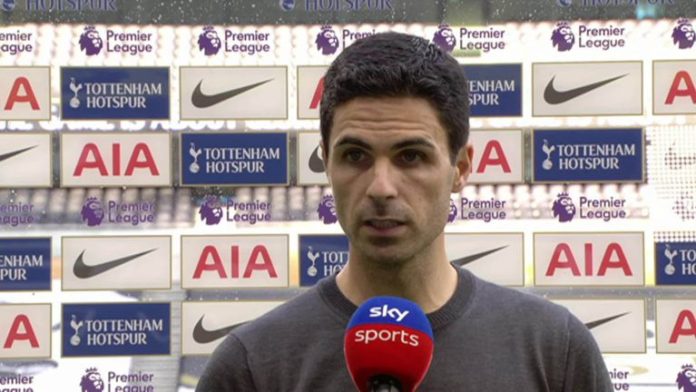 Mikel Arteta was left to rue Arsenal’s 2-1 defeat to Tottenham, claiming “the game was ours”, while Jose Mourinho has his sights set on the Europa League.

Arsenal were unbeaten in five games heading into Sunday’s north London derby and dominated possession – seeing 62.9 per cent of the ball – and taking the lead with a thunderous Alexandre Lacazette strike in the 16th minute.

But Tottenham took advantage of some sloppy Arsenal defending a few minutes later as Heung-Min Son slotted home before a late Toby Alderweireld header handed the hosts all three points.

It was a defeat that stung the Gunners, letting another lead slip after drawing 1-1 against Leicester in midweek, and Arteta believes it was the little things that cost them at the Tottenham Hotspur Stadium.

“We are really sad, we wanted to give our fans a moment of glory and happiness,” the Arsenal manager told Sky Sports.

“We tried our best, I am really proud of my players. I’ve never seen us play like this before, dominating an opponent as much as we did today. But we gave them a goal again, conceded at a set-piece and at that level you cannot do that.

“The game was ours, we had total control. They didn’t generate anything, every time we pressed, they couldn’t come out ball after ball. It’s difficult to attack a low block like this, but we created enough chances. But the small details cost us and that is the biggest part we have to address as a team.

“We will keep trying to improve and coach the players to get that [the mistakes] out of their head. It happened today and when it happens in big games the margin isn’t big enough to win games.

“We played the way we wanted to play, the way we want to come to any ground and put the performance we put in, to dominate the opponent. We will move forward and continue that way.

“It’s a massive blow, the players are gutted. You saw the effort they put in. We came here to win, that is the game plan we had. To lose it, it will take a few days to swallow that one because we know how much it means to our fans.”

Mourinho: We will fight for Europa League

It was a first north London derby win for Jose Mourinho and, after failing to register a shot on target against Bournemouth during the week they had nine against Arsenal, but the Portuguese admitted the game was a tight encounter.

“I think the game was close… and was more tactical than others think,” Spurs boss Mourinho told Sky Sports.

“Mikel [has] found a way for them to play, to be stable and improve – they are improving – and we felt that we should adapt slightly to them and I think we did it very well.

“And the first period of the second half when they had more of the ball and more in our half, we were quite comfortable in that situation and the two midfielders did a great job. Then we found our chances, there was a great spirit and it was really hot and nobody thought about it, even myself, but Arsenal had 48 hours more than us to rest.

“So it was hard, but it comes from their hearts, this effort and battle and even in the last minutes of the game, there was zero problems, everything was under control.

“There was a little bit more sharpness and aggression and in the transitions that we had, I think we could score a couple more goals but, to be honest, I think it would be unfair, a bigger difference than one goal, because the game was really hard.

“We are happy because we made the fans happy, because we are still in the fight for a Europa League position. I know that Chelsea and Liverpool they didn’t help us at all, but this is about us, we must do the points and we lost some important points. But now, there are nine to fight for.”

The win moves Tottenham above Arsenal into eighth place, putting them in contention for a Europa League finish, and it is something Mourinho – who won the competition with Manchester United in 2017 – has in his sights.

“I’ve changed clubs a few times in my career and I could never say I was born a Manchester United fan or a Tottenham fan or Chelsea fan. I was not, I was born a Setubal fan,” Mourinho said.

“But in every club that I move to, I wear the shirt, I feel the spirit and I feel what is important to the fans. I know how important for Tottenham fans this victory is, especially because this season is not a season with many occasions to enjoy it.

“I’m very happy for that but I have to have a little bit more ambition than to win a north London derby. We want to play in the Europa League and we are going to fight until the last minute of the game against Crystal Palace to reach that.”

Sky Sports pundit Jamie Redknapp saw an improvement in Tottenham from their goalless draw with Bournemouth.

He told Sky Sports: “It was [a better performance] to a certain extent. It was a performance of a team struggling for a little bit of confidence, Arsenal had the ball for long periods and Spurs had to play on the counter-attack, but at least they looked dangerous. They just looked like a bit more of an attacking threat.

“Arsenal’s back three will always give you a chance. It’s a fact. They’re defending better but they can’t help it, it’s in their DNA right now.

“But for Spurs, it was all about getting three points. There was some moments that went their way but they looked dangerous enough and you thought something might go their way and it’s a brilliant header from Alderweireld. That’s what leaders do and you need people like him to stand up when you have a difficult period.

“Jose masterclass! That’s what they call it, isn’t it?!”

Former Arsenal and Tottenham defender Sol Campbell joined Redknapp in the Sky Sports studio and he believes the win can give Spurs the platform to end the season strongly.

He added: “Did Jose need that? Big time. It’s a massive confidence boost. The games before weren’t good; no shots on target against Bournemouth doesn’t go down too well but he’s redeemed himself with that. They didn’t have much possession but they got the win. Tottenham can kick on now.”

Spurs travel to Newcastle on Wednesday at 6pm, host Leicester on Super Sunday at 4pm before concluding their Premier League campaign away at Crystal Palace at 4pm on July 26.

Arsenal host champions Liverpool on Wednesday at 8.15pm, live on Sky Sports, take on Manchester City in the FA Cup semi-finals on Saturday at 7.45pm, travel to Aston Villa on July 21 at 8.15pm and complete their Premier League season at home to Watford at 4pm on July 26.