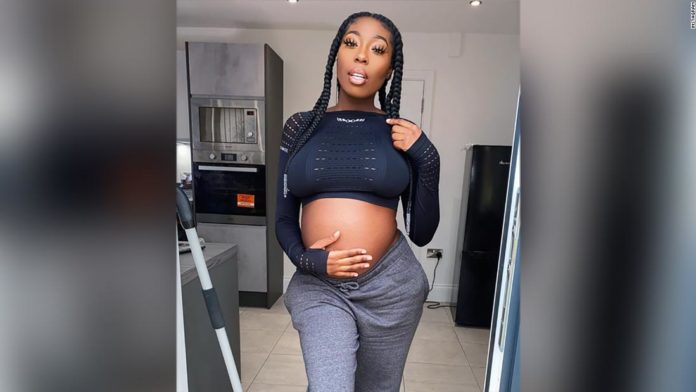 The London-based influencer’s family confirmed the news on Sunday in an Instagram post, stating that Thea’s unborn son had also died.
“To all Nicole’s friends and supporters it is with great sadness that I have to inform you that Nicole and her son she and Boga named Reign sadly passed away on Saturday morning,” the statement read.
The message explained that Thea had pre-scheduled “a few YouTube videos” to upload on her channel before her death, and her boyfriend, Boga, had “made the decision to allow them to be aired.”
The family asked for privacy, saying “our hearts are truly broken and we are struggling to cope with what has happened.”
The cause of Thea’s death is not yet known. The former dancer was around eight months pregnant.
Thea announced her pregnancy back in April with an Instagram video showing off her baby bump while dancing beside Boga.
“We can’t hide this any longer, secrets out… GOD gave us the biggest blessing yet. I’m finally creating a beautiful little human inside of me,” the accompanying caption read. “Can’t believe this bubba will be half of me and half of the loml. Honestly, @global_boga has been the best support EVER and GOD made no mistakes making him the father.”
She added: “We are already obsessed with you our little miracle baby. Thank you for choosing us to be your parents and best friends.”
Thea had amassed more than 80,000 subscribers on her YouTube channel, where she often discussed her pregnancy journey and posted content featuring boyfriend Global Boga — real name Jeffery Frimpong — who is a street dancer.
Her most recent video, titled “GOT IN A BATH FULL OF MILK! *BTS PREGNANCY SHOOT,” was uploaded on Sunday.
In the 14-minute footage, Thea can be seen getting ready for her milk bath, while talking her followers through the process. She also showcased special moments from her maternity photoshoot.
On Saturday morning, Boga shared a video of himself dancing with a baby carriage and said in a post the week before that he believed his son was arriving “on a Monday.”