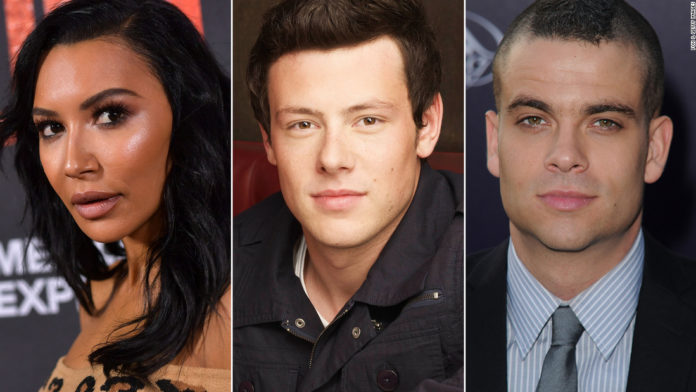 The death of one of its stars, Naya Rivera, during a boat trip on a California lake is the third tragedy to befall the cast of the Fox series that ran from 2009 to 2015.
Rivera was 33.
Rivera’s fellow “Glee” cast members Cory Monteith and Mark Salling have also died.
The loss of the young actors has had some questioning whether there is a “Glee curse.” The discovery of Rivera’s body coincides with the seventh anniversary of Monteith’s death.
Monteith was 31 when he was found dead in a hotel room in Vancouver, British Columbia, in 2013.
His death was later ruled accidental, a result of mixed drug toxicity.
Monteith’s death stunned his friends, family and fans.
There was a huge outpouring of grief for the beloved actor, who played Finn Hudson on the show, which centered on a high school glee club.
A tribute episode titled “The Quarterback” found the entire fictitious McKinley High School grappling with the character’s loss — including Finn’s love interest, Rachel Berry, played by Monteith’s real-life girlfriend, Lea Michele. “He was my person,” Michele’s character, Rachel, cried during the show.
“I feel like, for me personally, I’ve lost two people: Cory and Finn,” Michele told TV Week Australia at the time. “Everyone is asking, ‘Is it hard to do this? Is it hard to be back at work?’ But the truth is, it’s no harder at work than it is in life — so we might as well all be together as a family supporting each other to get through this together.”
Five years later, Salling, who had dated Rivera, died by suicide at the age of 35, two years after he was indicted on charges of receiving and possessing child pornography.
He had pleaded guilty to one count of possession of child pornography involving a prepubescent minor and was scheduled for sentencing when he died.
“Glee” vocal arranger Tim Davis tweeted about the tragedy at the time.
“Today we lost another #Glee cast member,” Davis wrote. “Yes, he committed crimes against children. Yes, it’s horrific. But #MarkSalling was a broken man, no doubt an abuse victim himself. I loved Mark, and am sad when I consider the devastation of his parents. PLEASE withhold your cruel comments.”
“Glee” cast member Matthew Morrison played teacher Will Schuester and shared a photo at the time, showing him with Monteith and Salling dressed in matching black suits with black ties in what appeared to be a casino.
The caption for the photo showed two angel emoticons and one sad face.