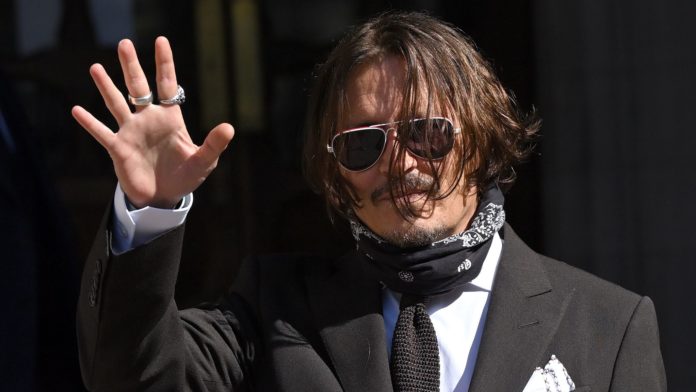 Johnny Depp’s libel trial against The Sun has been colourful – we’ve heard allegations of violence, drink and drug abuse and dirty protests.

And you’d be forgiven for forgetting that the Pirates Of The Caribbean star is actually suing News Group Newspapers (NGN), rather than his ex-wife, Amber Heard.

So, as the curtain is pulled back on the dysfunctional Hollywood relationship, here are the key players in the libel case of the decade.

Johnny Depp started off as a wannabe rock star from Kentucky, and now he’s one of the highest grossing actors in the world.

He has been in the business for 30 years, has more than 90 roles to his name, and has been nominated for a best actor Oscar three times.

Stand-out roles include Edward Scissorhands, Captain Jack Sparrow in Pirates Of The Caribbean and, most recently, Gellert Grindelwald in the Fantastic Beasts franchise.

In fact, it is this role that sparked this entire case; the 57-year-old is suing NGN over the publication of an article published in April 2018, which ran with the headline: Gone Potty: How can JK Rowling be ‘genuinely happy’ casting wife beater Johnny Depp in the new Fantastic Beasts film?

He has had a series of high-profile relationships with glamorous women, including Kate Moss, Winona Ryder and Vanessa Paradis – with whom he has two children.

Depp married Heard, a model and actress, in February 2015. Their marriage lasted 15 months.

Heard, 34, was born and raised in Texas.

One of her first big-screen roles was an appearance in comedy Pineapple Express, alongside actor James Franco (who’s received numerous mentions in court).

She met Depp when they both appeared in 2011’s The Rum Diary.

Heard is The Sun’s star witness.

Now 47, she has been a spokesmodel for Chanel for many years and also acts and models alongside her musical career.

After meeting Depp around 1998, the couple spent more than 14 years together, but never married.

They have two children – daughter Lily-Rose, 21, and son Jack, 18 – who are both pursuing careers in showbusiness.

Paradis will give evidence at the trial from France via video-link.

She has previously described Depp as a “kind, attentive, generous and non-violent person and father”.

During the 1990s, Winona Ryder was one of the most famous actresses in the world.

She starred in Mermaids, Bram Stocker’s Dracula, Little Women and she also acted alongside Depp in Edward Scissorhands.

Ryder has described Depp as her first big love. They were together for around four years, even getting engaged, but eventually called it a day in 1993.

Depp famously had “Winona Forever” tattooed on his arm, but had it modified to read “Wino Forever” after the split.

She is due to give evidence in the trial via video-link from America, and has also said Depp was never violent towards her.

Amber Heard’s sister has been with her in court and is set to give evidence later in the trial.

She has been mentioned throughout the hearing so far as having been present for some of the alleged incidents of domestic abuse.

Ms Henriquez was said to be among a group of people who were with the couple in June 2013, when Depp – who had been taking drugs, according to Heard – became “enraged” and “jealous” when one of her friends touched her.

She was also apparently in a car with Depp, Heard and others when the actor allegedly dangled Heard’s pet dog, Pistol, out of the moving vehicle’s window.

Journalist Dan Wootton is The Sun’s executive editor, a role he took up in March 2018.

The New Zealand-born 37-year-old is the second defendant in the case, alongside NGN.

The article at the heart of Johnny Depp’s libel claim was written by Wootton in April 2018.

Wootton, who also presents the weekday Drive Time show on Talk Radio, was previously showbiz editor at the now defunct News Of The World, and was showbiz presenter for ITV’s Lorraine for 10 years.

He will not be giving evidence at the trial.

David Sherborne is the lawyer representing Depp in the case.

His past clients include Princess Diana, Sir Paul McCartney and Sienna Miller, and he will be representing Meghan, the Duchess of Sussex, in her own High Court action against The Mail On Sunday next year.

He has a history with NGN, after previously being involved in the phone hacking case against the News Of The World.

Sasha Wass is The Sun’s lawyer.

She has practised at the Criminal Bar for 38 years and has been described by The Times as “clever and ice cool”.

The case is being overseen by Mr Justice Nicol.

Ahead of the trial, he refused to block Heard from sitting in on evidence saying it “would inhibit the defendants in the conduct of their defence”.

Pre-trial he also ruled that Depp was in breach of court for not disclosing texts, but knocked back The Sun’s requests to drop the case over the matter.

More than 20 other people are being called as witnesses by both Depp’s and The Sun’s legal teams over the course of the trial; some in person, but the majority from overseas via video link.