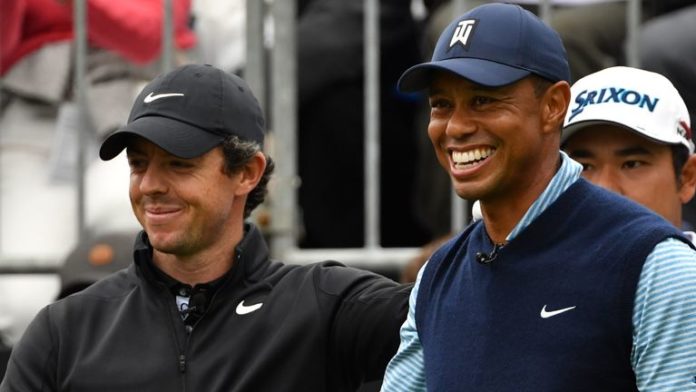 The top five in the world are playing, as well as Tiger Woods, so there’s a lot of good narratives going on in the game right now. We’re coming into some real big events that they’re all going to be playing in.

These guys are getting ready for the PGA Championship and we’ve also got a World Golf Championship event just before that, so that’s why we’re seeing Woods coming out of hibernation now.

We haven’t seen him since the Genesis Invitational back in February, where he actually played poorly, but we’ve seem him come back from a long break before. He did it last year, when he had a small procedure done, then came back and won straight away with the Zozo Championship in Japan.

We’ve seen him come back and hit the ground running before, so you can’t rule him out of anything, but I’d be surprised to see him contending this week. What he has really got his eye on is the PGA Championship and this is going to be good preparation for him.

Rory McIlroy has lost a little bit of momentum since the restart. He was flying just before the lockdown happened and was so consistent, but since he has come back that hasn’t quite happened for him.

Whether it’s the lack of atmosphere or he has lost a bit of momentum by not being able to practice as much, I’m not sure, but he certainly doesn’t have the same bite. We haven’t seen it so far anyway, but he’s a guy for the big occasion and I think that having Woods in the field this week will bring a bit more of a competitive edge to him.

We’re not seeing that his swing has all of a sudden gone poor or his putting has gone poor, he just doesn’t seem to be on the edge mentally. I think when he has got the bit between his teeth and has something to prove, or when he has been discounted, is generally when he plays his best.

The recent evidence of that is The Open last year when he missed the cut and then went on a great run after that, winning a couple of events as well as the FedExCup. There are people questioning him and wondering why he’s not the same as he was before lockdown, but I think that will be good for him as that seems to be when he’s at his best.

Bryson DeChambeau is taking all the attention right now with how far he is hitting the ball and I’m sure the likes of McIlroy and Brooks Koepka won’t like that. They’ve been the big daddies in terms of big-hitting and being at the upper-echelons of the game in recent years.

Everyone in golf has generally talked about Tiger or Rory or Brooks over the past year or two, whereas DeChambeau has come in and is now the fox in the hen house. I’m looking forward to seeing what reaction the other players come up with.

You want to see good guys and the bad guys and a little bit of rivalry between players. I think golf has sometimes been accused of being too friendly. It’s no surprise to see a bit of an edge between the players and for us in the media and watching at home on TV, that can only be a good thing.

DeChambeau is a little bit of an outsider, not just as a golfer but also with his personality when compared to a lot of the players at the top of the game. Since we have come back from lockdown he has been the story in golf, with the vast distance he’s hitting the ball amazing everybody.

He has reinvented long-hitting in golf and we’ve never seen someone put on so much length in such a short space of time, but in terms of whether it’s good for the overall game of golf then I’d have my reservations. It should also be about accuracy.

Watch the Memorial Tournament throughout the week live on Sky Sports. Live coverage begins on Thursday with Featured Groups from 12.15pm on Sky Sports Golf.