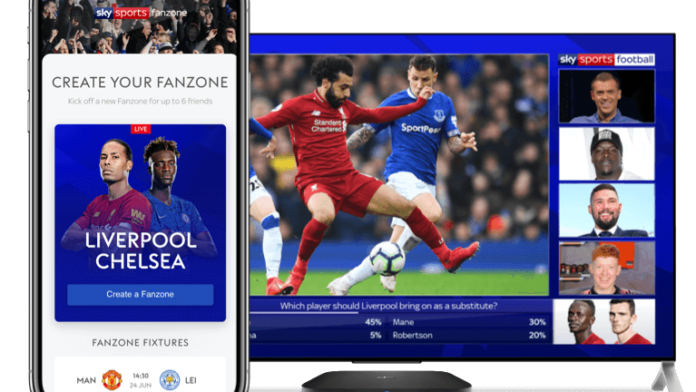 Join with your friends and family to chat, vote in live polls and choose your team’s chant to build the atmosphere

Take the return of the Premier League to the next level with the Fanzone feature as part of Sky Sports’ live coverage.

TAP HERE TO ACCESS FANZONE FROM 8PM ON WEDNESDAY

On Wednesday, join our special guests for the Watchalong from 8pm on Sky Sports Football.

Fans will now be able to use a new feature on the Sky Sports website on your phone (optimised on iOS for iPhone 8 and above), laptop or PC to watch select matches with friends in a video room and interact while the action unfolds, giving them the chance to chat about the match and influence the crowd noise they hear on screen.

Whether watching with fans of your own club or mixing with rival supporters, users of the feature can post predictions, join in-match polls and use the Sky Sports stats to fuel the virtual conversation.

Get into the game with family and friends

Invite up to five people to your Fanzone to catch the match together. Log in online on your phone, laptop or PC, set up your Fanzone and send a link to your fellow fans. The Fanzone opens 15 minutes before kick-off and will close 15 minutes after the match.

Have your say/pretend you’re a pundit

Do you usually yell at the screen during a game? Or fancy yourself as the next big-name pundit reporting live from the Sky Sports News studio? Share your views on the players and their performance in live opinion polls.

Watchalong with pundits and presenters

While using the Fanzone feature on skysports.com, fans can also simultaneously view the Sky Sports Watchalongs (via the Sky Sports Football channel), where Sky Sports pundits and presenters will be watching the game, reacting to events and answering your social media questions.

Choose the cheer you hear with Watchalong

Also with the Watchalong, fill your home with the sound of the stands so you feel like you are right there at the game. Drown out any support for the opposition and vote for your team’s chant to be played through the TV.

Viewers can see which crowd noise is being voted for in the ‘Choose a Chant’ poll and analyse match stats as the game is going on.

Where can I experience Fanzone and Watchalongs?

The Fanzone feature is available to Sky Sports customers on skysports.com on phone, laptop or PC on the following games, with more to be announced for future rounds.

The Watchalong feature will be available to view on Sky Sports Football from 8pm on Wednesday.

More games to be announced

There are three ways to watch the game on TV, where Fanzone is available. For the full Fanzone experience head to the Football channel.

Who can use Sky Sports Fanzone?

If you are a Sky customer with a Sky Sports subscription, you can create a Fanzone, but you can share your Fanzone link with anyone. If you invite someone who has Sky Sports with another provider to your Fanzone, their live stream may be out of sync with yours.

How do I create my Fanzone?

How long is the Fanzone?

Sky Sports Fanzone opens 15 minutes before live kick-off. If you use video call, this will close 15 minutes after the match ends, but you can keep the conversation going via text chat. The Fanzone session will stay open until it’s closed by Sky.

Let us know what you think

With the Premier League returning, we couldn’t wait to create Sky Sports Fanzone. It’s a new beta feature available for some upcoming games, which means we’re still working on it. We’d love to know what you think so we can make it even better. Please email your feedback to apps@sky.uk.

Here’s a list of all the supported devices and browsers.

To create a Fanzone, you’ll need to be aged 18 or over, have a Sky Sports subscription, and be in the UK or Ireland. Please sign in below and see FAQs for more information.

Sky Sports are broadcasting 64 live Premier League games for the 2019/20 season resumption. In addition to the 39 matches already scheduled to be broadcast exclusively live on Sky Sports before the coronavirus interruption, 25 more matches are being broadcast on both Sky Sports Premier League and Sky’s free-to-air Pick channel, allowing the whole nation to be part of the return of live sport.

To celebrate the return of the Premier League, Sky Sports have also launched a host of innovative new features and updates to give fans an even more immersive experience and share the moments live with family and friends on virtual platforms.